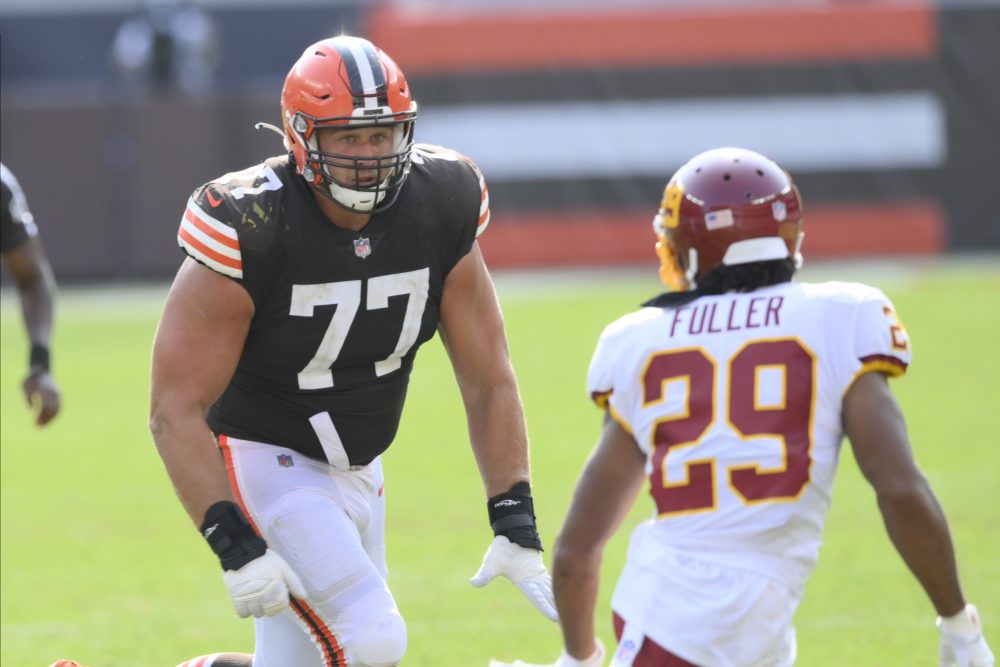 BEREA — Wyatt Teller was a distant fifth among the five starting offensive linemen. The right guard was either an afterthought or a major concern for the line-obsessed fans in Northeast Ohio.

Then the season started.

Teller has been the most pleasant of surprises in the Browns’ unexpected 3-1 start. For four weeks, No. 77 has routinely pulled in front of Nick Chubb and Kareem Hunt to lead the way for long runs, driven defensive linemen and linebackers into the ground and helped create a clean pocket for Baker Mayfield.

He’s earned consistent praise from coaches and teammates, as well as top marks from Pro Football Focus, which rates him the NFL’s best guard with a 94.1 grade.


Teller, 25, seems to have a new confidence about him but was adamant the early success hasn’t gone to his head.

“I can see it in almost every play. Even if it is plus-plus and Pro Football Focus puts it as a crazy play, I am still like, ‘Wow, I could have fit my backside hand underneath and gotten more lift and even more push.’ That is always the mindset. You are always trying to get better.”

When the Browns opened the virtual offseason in April, Teller (6-foot-4, 315 pounds) was competing with Drew Forbes, Colby Gossett and Malcolm Pridgeon to keep the starting right guard spot he held for the final nine games of 2019 after replacing Eric Kush. At the end of the 2019 preseason, former general manager John Dorsey had traded fifth- and sixth-round draft picks in 2020 to the Bills for Teller and a seventh-rounder in 2021.

By the time training camp finally opened in August, Forbes, Gossett and Pridgeon had opted out of the season due to coronavirus concerns, yet the coaching staff insisted Teller had to compete for the job.

It was the only undecided position on the line. Left guard Joel Bitonio has been to two straight Pro Bowls, right tackle Jack Conklin signed a three-year, $42 million contract as a free agent in March, center JC Tretter is a stalwart and left tackle Jedrick Wills was the No. 10 pick in April and handed the job.

Teller spent the offseason reshaping his body — he gained 16 pounds of lean muscle and lost 3 pounds of fat — and working with Bitonio and Tretter to improve chemistry. He was ready to show rookie coach Kevin Stefanski and veteran line coach Bill Callahan he was the only man for the job.

“I knew that I could play, but I did not expect to be handed a job and I did not expect to be handed anything,” Teller said. “I knew that I was going to work. I have been working the past three years that I have been in the league. I knew that it would be beneficial for the whole team to have a competition and not “an unproven guy, he is our guy.’ I kind of understood that I knew that I had to take lots of steps, but in my mind, it was mine, it was my job, I wanted it and I was going to do whatever it took to get it.”

The competition never really materialized, either due to the opt-outs or Teller’s improvement. He took every snap with the first-team offense in camp and bulldozed his way into the regular season.

He’s a major reason the Browns lead the league in rushing at 204.5 yards a game, but Callahan continues to drive him to master the details.

“He is getting better. He is a hard-working kid,” Callahan said. “He is really tuned into the game. He loves it. He loves the detail, the minutiae and all the finer aspects of offensive line play that you can’t give him enough techniques.

“We are still working on a lot of things with him, but we are really proud of his progress so far. He has not come close to where he can be. We have some great hopes for him to improve even more so.”

Teller appreciates the support and the constant push.

“I know my finish and my effort has been good and I know that I can even improve on that,” he said. “I just know that I can play at such a high level with my feet, with my hands and with my hat placement where sometimes I am behind the block, and luckily my strength gets the job done. That does not always work when you are going against people like (Colts defensive tackle DeForest) Buckner and guys like that. You have to be perfect because they are perfect, they play hard and they have the same effort you have, but now they are just as strong if not faster, if not stronger.”

Buckner will present a huge challenge for the interior of the Browns line on Sunday at FirstEnergy Stadium. The Colts have the top-ranked scoring and yardage defense and are fourth against the run, and Buckner has 1.5 sacks, eight quarterback hits, 18 tackles, two tackles for loss and a pass defensed.

Even with the new attention he’s received, Teller still aspires to be like his linemates.

“Whenever I see them, I am like, ‘That is what I want to do and I want to be,’” he said. “It is kind of cool, you have Jack and Joel are the smart ones and I am the mauler, so they tell me what to do and I go maul them. It is a pretty good deal.”

Teller embraces the attitude needed to play in the trenches.

“Sometimes — it is a bad word — being a pr— is a good thing,” he said. “I have to be smarter with my hands and no personal fouls or holding calls, but I think that that helps in the long run is having that little bit of edge, that chip on your shoulder to where guys are not just thinking about the block, they are thinking about the guy trying to take their head off. I think that that helps the whole offensive line and we see it and it is working and it is good.”