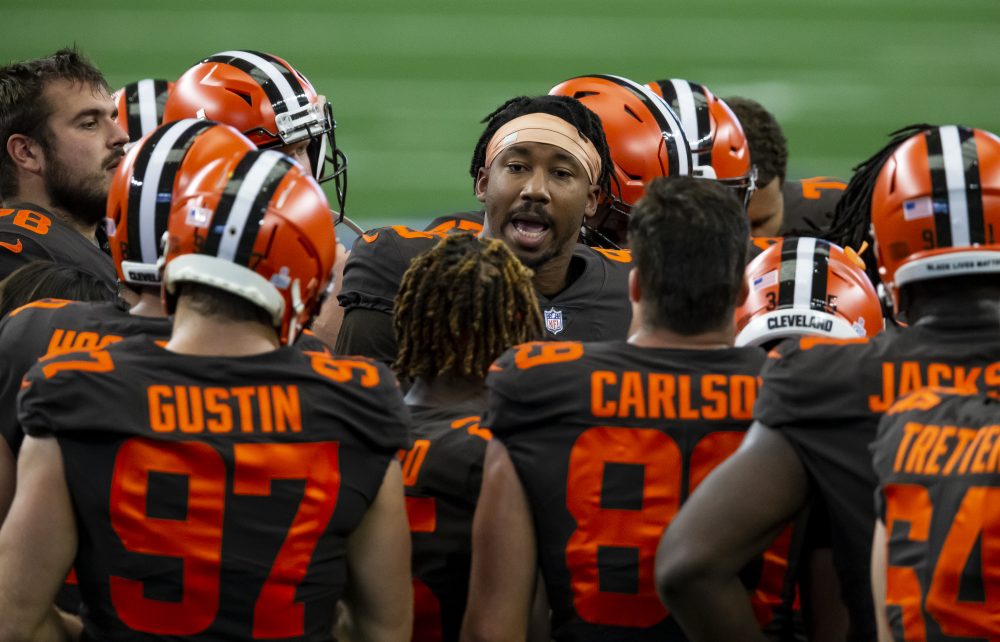 BEREA — A league-leading five sacks, including a strip-sack in three straight games, is impressive.

But Myles Garrett has been on fire before.

“Have I ever played better? I had nine sacks in high school in one game, if that counts,” he said Friday.

The level of competition in the NFL is better than at Martin High School in Arlington, Texas, but Garrett continues to torch the opposition.

“You have one of those flamethrowers out there, that is what allows you to do certain things in coverage,” coordinator Joe Woods said. “I always try to put Myles in good situations because I feel like if we can get him one-on-one, I feel like he has a chance to win every time. Just what he has done over the last few games, it speaks to the level that he is playing at right now.”

Garrett destroyed Cowboys rookie right tackle Terence Steele for two quick sacks Sunday, including a strip of Dak Prescott. The Cowboys benched Steele and spent much of the rest of the game blocking Garrett with two linemen or chipping with a tight end or running back.

That’s standard protocol for trying to slow down the league’s premier pass rushers.

“That is good news for us. It is one less guy out there in the pass route,” Stefanski said.

Garrett’s two sacks and forced fumble in the 49-38 win over the Cowboys earned him his first AFC Defensive Player of the Week award.

“It is something they should have done already by now, but whenever you start picking up traction, just do not lose it,” he said. “Now I am just trying to keep the momentum, and we are trying to build off of that as a defense.”

And extend the strip-sack streak.

“As long as I can keep it going,” he said when asked about its possible duration. “As long as I have a chance to get some one-on-ones and rush the passer, but we have to earn the right by stopping each team’s running attack, and the Colts have some talented running backs.”

Attendance Sunday at FirstEnergy Stadium will be 12,000 after the Ohio Department of Health raised the 6,000 limit that was in place for the first two home games.

“I love that there will be 12,000 fans there,” Stefanski said. “I hope they sound like 120,000. Wear your mask, though. Really looking forward to having them in the building.”

David Njoku (knee) made it through the week healthy and will be activated before Sunday after missing three games on injured reserve, Stefanski said. He had three catches for 50 yards and a touchdown before getting hurt in the opening loss, and the coaches plan to add him to the mix with Austin Hooper and rookie Harrison Bryant, who’ve played well.

“We have a plan and we go into the game and we have three guys that are really good and belong on the field in a variety of roles,” tight ends coach Drew Petzing said. “May the best man play and continue to play. I think we are going to use all three of them a lot and really rely on them to have success on offense as we have throughout the season.”

Garrett wore a shirt with “McD” inside a heart to support Bridget McDevitt, who is fighting Grade 3 neuroendocrine cancer. She’s married to Browns vice president and general counsel Ted Tywang.

“Just wanted to bring a little light to her and show that we care,” Garrett said.

** Linebackers coach Jason Tarver was a young coach when Hall of Famer Bill Walsh was general manager of the 49ers. He follows Walsh’s teaching with the linebacker rotation.

“One of his favorite phrases was ‘know your personnel and use your personnel,’” Tarver said. “What that means is figure out what guys can do and then give them a chance.”

** Colts backup cornerback T.J. Carrie played for the Browns the past two seasons.