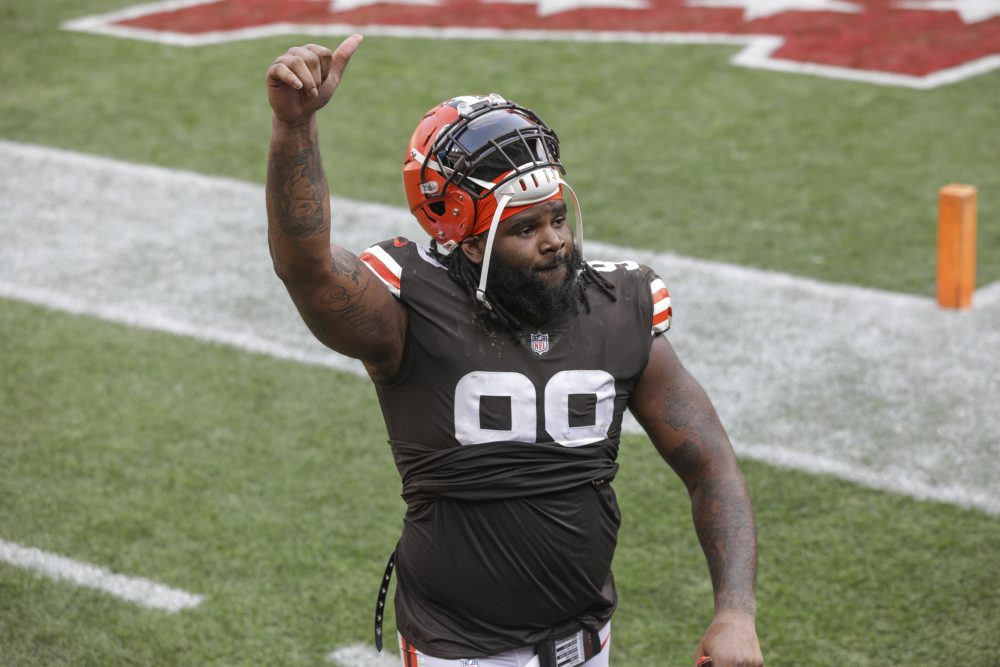 “I got half of that,” he said to end Myles Garrett, who had dragged down Haskins by the shirttail. “We’re sharing that.”

The official stats crew didn’t agree, giving the whole sack to Garrett, who leads the league with five through Cleveland’s 3-1 start. While Richardson didn’t get credit for getting a hand on Haskins as he went down, he’s not only off to perhaps the best start of his eight-year career, he’s helped push Garrett to the front of the pack in the race for NFL Defensive Player of the Year.

“He wants to be great, and I want to be the greatest,” Garrett said Friday. “He is not going to back down towards me at all and I have a standard to set for myself so I am always going to try to reach and exceed that. Anytime I feel like someone is trying to pass me up, I am going to step up above and beyond.”


Garrett was mic’d up against Washington, capturing the banter on the field and the bench. After Richardson got a sack by himself, he said he had another one coming while Garrett was done for the day.

“You ain’t the greatest. You ain’t got the talent,” Richardson said.

Garrett responded by sacking Haskins, forcing the fumble and recovering it — the second in his ongoing streak of three games with a strip-sack. Richardson congratulated Garrett before he could reach the sideline.

“Playing a year with Myles, I know how he is,” Richardson told The Chronicle-Telegram on Thursday in a phone interview. “I wouldn’t say he gets complacent, the way of the game might get to him a little bit, like any other player. Just got to keep him focused and keep him hunting.

“We need each other to get these sacks. And I definitely need him to keep the quarterback stepping up in the pocket and forcing him towards me, too. So it’s vice versa, I just keep him motivated a little bit. As strange as that sounds.”

Garrett knows how to take what Richardson calls “being a good teammate.”

“I love the negative energy and the doubt, especially coming from him,” Garrett said. “I know it is coming in a playful manner, but in a way, I take it personal.”

Garrett’s dominated the headlines in the first month of the season, but Richardson’s play shouldn’t be ignored as the front four tries to carry a short-handed and struggling back seven. Richardson has 10 solo tackles and four assists, three tackles for loss, two sacks and a pass defensed. He’s on pace to tie his high of eight sacks in 2014, when he was a Pro Bowler for the Jets in his second season.

Is this the best the 2013 Defensive Rookie of the Year has played?

“As far as getting sacks-wise, yeah, but other than that I’m pretty much doing what I usually do throughout the years,” said Richardson, who has 28.5 career sacks. “I always want to patent myself on getting better every year.

“I’ve seen so much in the league I’m going to be better, and then I pick out what I don’t do well and I try to make it a strength. Coaches have their game plans against me, not just Myles, against this defense.”

New coordinator Joe Woods agreed Richardson, 29, keeps getting better but also drives him to fulfill his vast potential. The 6-foot-3, 294-pounder has superb quickness to go with his strength.

“I mess with Sheldon all the time because I remember when he came out in the draft, and I came from the Tampa tree and it was always about Warren Sapp as three-technique, and I remember when he came out in the draft, it was like, ‘Man, this is the next guy,’” Woods said. “I make sure I remind him of that and say this is the guy that we need to see all the time. If there is a big play he makes or you see him running to the ball, I always trot that out to him because if we can get him playing at that level, that just helps us when it comes to defending the run and the pass.”

The Browns will need to do both against a solid Colts offense led by 17-year veteran quarterback Philip Rivers, rookie running back Jonathan Taylor and a talented and cohesive offensive line.

“They’re a well-balanced breakfast over there,” Richardson said. “We just have to go out there and do our job and execute and just make the plays that are presented to make. Do your job, don’t do too much extra.”

Richardson will see a lot of left guard Quenton Nelson, who was an All-Pro in his only two seasons.

“Haven’t had a chance to play against him, but we’ll put his name to the test,” Richardson said.

He was eager to sign a three-year, $37 million contract in March 2019 because he had played with the Jets, Seahawks and Vikings in the previous three seasons. He’s grateful to be in the same city for a second straight year but notes the change in coaching staff makes it seem like another fresh start.

The Browns’ first 3-1 start since 2001 is a difference embraced by Richardson.

“Only thing I wish more that I can actually feel the fans’ love that we usually feel when we’re leaving and going to games and stuff like that. Seeing the crowd turned up,” he said. “It sucks for the fans of Cleveland to not be a part of it as I know they want to be. I felt the same energy last year. It was all love and for us turning the page, keeping moving forward, we would definitely love to have those guys in the stands.”

“That is my guy. That is my guy,” said linebacker B.J. Goodson, who’s in his first year with the Browns. “Running hard to the ball, getting out of his stance and fighting his tail off. That is my guy. If there is anybody I want to go to war with, Sheldon is my guy.

“He has his own personality and is a great guy to be around.”