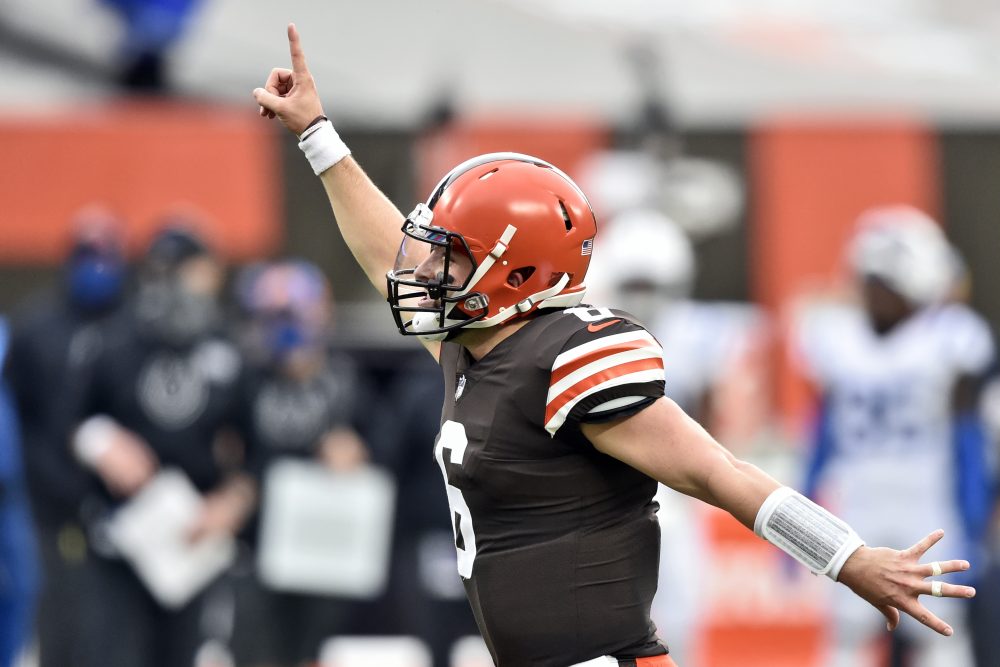 CLEVELAND — Jarvis Landry sat down for the Zoom interview and took a giant bite of pizza with a smile nearly as grand.

The Browns’ 32-23 win over the Colts (3-2) on Sunday in front of 12,000 fans at FirstEnergy Stadium didn’t follow the script. It featured pivotal plays by backups, a long ugly stretch on offense, what quarterback Baker Mayfield called his worst game of the season, a momentum-stealing special teams breakdown and a string of injuries.

Bill Belichick was the coach 26 years ago, and it took until his fourth season for such a hot start. That team went on to get a playoff win, the most recent in franchise history.

Kevin Stefanski is in his first year as a head coach at any level and needed only five games to get to 4-1. He’s the first coach to start his Browns career 4-1 since Nick Skorich in 1971.

“It is very special. We continue to take strides each and every week,” said receiver Jarvis Landry, who had four catches for 88 yards. “How hard we work and how hard the coaching staff works, it is no surprise that we are in this position.”

The streak sets up a showdown in Pittsburgh next Sunday. The Steelers are 4-0 and atop the AFC North.

Baker Mayfield’s sore ribs required X-rays after the game — they were negative — but he didn’t hesitate to guarantee his availability for next week, even with a right wrist that was banged up a play before the interception in the fourth quarter.

The Browns again showed they come from sturdy stock. As has been the case all year, they needed to overcome adversity to emerge victorious — plenty of it self-inflicted.

Mayfield went 2-for-9 for 19 yards with two interceptions in the second half — Colts end Justin Houston leveled him on the second one to bruise the ribs — erasing the positive memories of the first 30 minutes when he threw for 228 yards and two touchdowns. The warning signs were visible early, as Mayfield threw high often and was bailed out by his teammates with a number of contested catches.

“I earned that one,” he said of the injury. “I think that was the worst game I have played out of the five so far.

“Have to continue to get better and put us in positions to win. There were two turnovers today. Not good enough. A lot of missed completions out there and a lot of guys that were open, so have to continue to better.”

Mayfield finished 21-for-37 for 247 yards, two touchdowns, two interceptions, a sack and a 72.7 passer rating, snapping a string of three games with a rating above 100.

“The good thing about it is we do not have to learn from a loss — we can get better after a win,” Mayfield said. “Just the mindset of trying to be just a bunch of big, hairy American winning machines is important.”

The league’s top-ranked rushing offense wasn’t the same without Nick Chubb, who’s on injured reserve, and against a stunting, fundamentally sound defense that entered ranked No. 1 in scoring and yardage and No. 4 against the run. The Browns were held to 124 yards on 33 carries (3.8 average) after 307 last week in Dallas, but got perhaps its two most important runs in the final three minutes.

Kareem Hunt (20 carries, 72 yards, three catches, 21 yards, TD) picked up 10 yards to start the final drive with the Browns clinging to a 29-23 lead. Then D’Ernest Johnson (eight carries, 32 yards) went for 28 on third-and-9 to take the game to the two-minute warning.

“Yeah, it was a tough day,” Landry said. “We were able to muscle a bit at the end and it finally broke for us a little bit with a couple of big runs there to finish it.”

Cody Parkey’s 46-yard field goal with 21 seconds left accounted for the final margin and kept him perfect since he took over in Week 2.

Those were the only points generated by the offense in the second half. The defense took care of the rest.

Safety Ronnie Harrison, making his first start for the Browns with Karl Joseph inactive with a hamstring injury, stepped in front of a late Philip Rivers throw to the sideline and returned it 47 yards for a touchdown. Defensive end Myles Garrett gets credit for the other two points, pressuring Rivers into an intentional grounding from the end zone that resulted in a safety.

Rivers (21-for-33, 243 yards, two interceptions, one sack, 60.5 rating) was in the pocket, and the officials ruled there wasn’t a receiver in the vicinity of the pass that sailed out of bounds. The two points were critical, as they made it a two-score game.

Garrett’s string of three straight games with a strip-sack ended, but he had a sack, the pressure on the safety, four quarterback hits and forced Rivers up in the pocket on safety Sheldrick Redwine’s interception with 11:24 left. Redwine was only playing because Harrison had exited with a concussion.

“It was crazy. That was my first drive on defense this season,” Redwine said. “I walk onto the field and I was staring at the ball, pointing at the ball and said, ‘I need you.’ For a feeling to just say that and then see that happen, it is unexplainable.

“That is a great feeling being 4-1, bringing winning back to the Browns and being a part of that. That is something that no one can take from you.”

The two interceptions gave the Browns 10 takeaways in the last three games.

“We counted on that defense today, and they played well,” Mayfield said. “Guys stepping up and making plays.

“We said at the very beginning, at some point this year we are going to need everybody in the building.”

Harrison’s pick-six provided a 27-10 lead with 12:15 left in the third quarter. The Browns immediately lost the momentum, and much of the cushion, when Isaiah Rodgers returned the kickoff 101 yards for a touchdown. He started up the right side, cut back near midfield and was gone. The Browns have been bad in kick coverage all season.

They managed to overcome, and did so with the unlikely performances of Harrison, Redwine and receiver Rashard Higgins (three catches, 31 yards, 15-yard TD), who had been a healthy inactive the previous two weeks. Whether it’s the stars or the backups making the plays, the Browns have found ways to win four in a row.

“Just putting it together one game at a time,” Garrett said. “That is all you can do. It is not perfect, but we are making the best of it. We are coming together as a team and doing it all in every phase.”