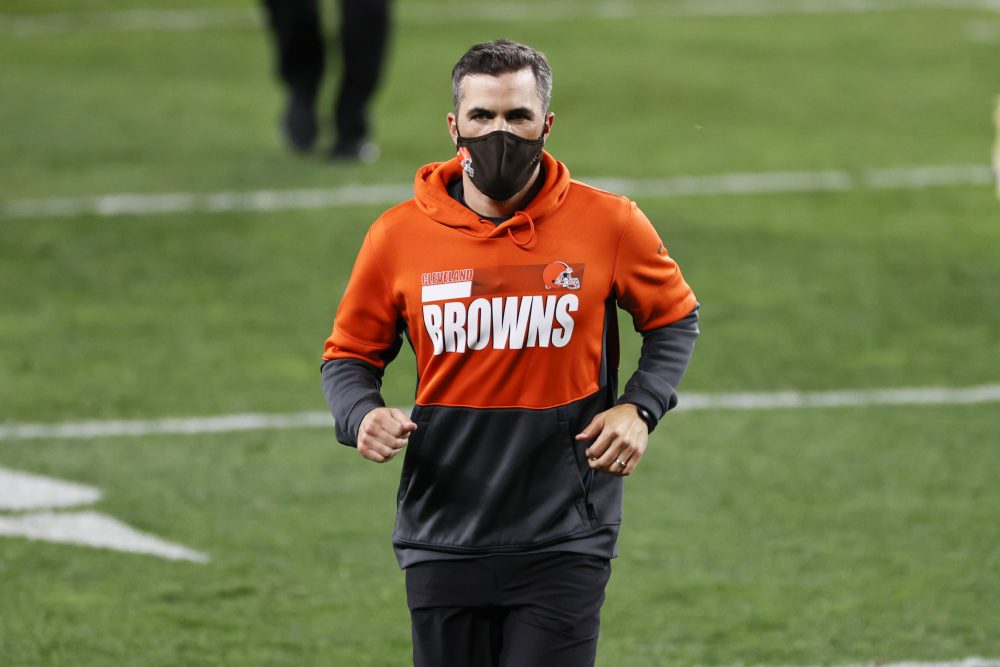 Can they win when Baker Mayfield has a bad game?

Can they win without Nick Chubb?

Can they win without Wyatt Teller?

Can they win when they give up a touchdown on a 101-yard kickoff return?

Can they win when Jarvis Landry drops two passes?

Can they win when all of that happens in the same game?

So to review, less than one year A.F. (after Freddie), the Browns should be considered legitimate, bona fide playoff contenders. They had a golden opportunity to prove that wasn’t the case in the second half Sunday, when the roof began to leak and nobody could find any buckets.

But when push came to shove, they pushed their lamentable history aside, shoved the Indianapolis Colts into the loser’s circle and validated their legitimacy as a genuine, authentic team that’s no fun to play.

Coach Kevin Stefanski called his team’s palindrome (32-23) victory, “Not pretty, not perfect,” by which he meant, “drop-dead gorgeous, deliciously flawed.”

It was a game in which the battered and bruised Browns went so far down the depth chart that by the fourth quarter they had players taking the field wearing “Hello, my name is …” stickers where their numbers should be.

“You have to be ready to play the game that’s called for,” said Stefanski, whose team has successfully played four of them in a row and sits at 4-1, right behind the 4-0 Pittsburgh Steelers in the bruising AFC North. Guess who each team plays next week?

For the Browns, the plot keeps getting thicker, and juicier.

“Tough loss, on the road, against a good football team,” said Colts coach Frank Reich, who was so jacked for this game he was out of challenges halfway through the second quarter. “I give the Browns a lot of credit. They have good coaches and good players and they played well.”

The Browns are 4-1 for the first time since Bill Belichick looked like he was in fifth grade, but was actually the coach of the Browns.

Where was Baker Mayfield in the second half Sunday? After a solid first half, in which he did most of his damage through the air on rollouts, Mayfield’s second half looked like an old game tape from last year. He spent the second half getting punished in the pocket, and overthrowing receivers, but hitting Colts defenders in stride, resulting in two interceptions and at least that many sore ribs. There was so much concern by Browns officials that following the game Mayfield went to the X-ray room before visiting the media interview room.

“That’s the worst game I’ve played of the five (the Browns have played),” Mayfield said. “In the second half I should have been more patient. I forced it. A lot of missed completions I can learn from.”

At halftime, the NFL’s rushing leaders, sans Chubb, only had 38 yards on the ground, but were leading 20-10. The Browns had run 43 plays, 24 more than the Colts. Indianapolis ranks fourth in the NFL in run defense, so the Browns seemed to emphasize the pass in the first half. It worked, partly because Mayfield was doing what he does best: throwing while on the run.

In the second half, he did what he struggles to do: throw from the pocket. And it was not a pretty sight.

“(The Colts) made plays in the second half. Our offense couldn’t get into a rhythm,” Stefanski said. “That’s a really good defense.”

In winning, Cleveland took another important step toward being a really good team. The Colts were a good test at the right time for the Browns, who had won three in a row, albeit against three going-nowhere teams, the Bengals, Cowboys and the Washington Football Team.

Sunday gave everyone a chance to take the Browns’ pulse, because it was a game against an Indianapolis team that also entered the fray with a record of 3-1. Like the Cowboys game a week ago, it got a little hairy for the Browns in the latter stages.

But when it came to winning time, the Browns weathered the storm. In the fourth quarter, with the game still being decided, Myles Garrett, who seems intent on not just being the NFL’s Defensive Player of the Year but also its MVP, bull-rushed his way into Colts quarterback Philip Rivers’ grill in the back of the end zone.

Rivers, who has a wife and family to support, wisely heaved the football halfway to Lakewood, and was flagged for intentional grounding, which, when called in the end zone, translates to a safety.

That swung the momentum back in the Browns’ favor, in what’s resembling the long-awaited coming-of-age season most Browns fans have been waiting for since they were in diapers.

With this win, the Browns are now wearing big boy pants.