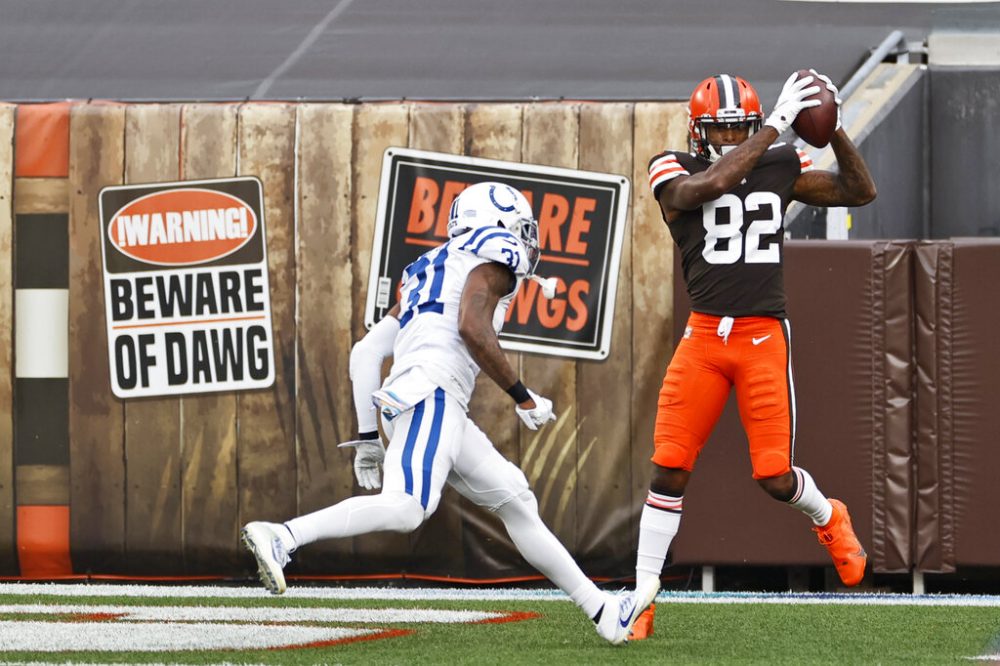 “It felt like I have been there before. It was just like, ‘You know what? I miss you. You miss me. Let’s walk together,’” Higgins said Monday. “It was fun, having my teammates just over there and just getting a win.

“It has been a helluva journey. You guys know. I have been here for 0-16, and just to see everything turn around, it is amazing — night and day. I can’t describe the feeling because I am still living in the moment right now. It is still unreal right now.”

The Colts blew a coverage and let Higgins run down the right seam, and Baker Mayfield spotted him. Eight of Higgins’ 80 catches in his five-year career have been touchdowns.

“I am like a magnet to the end zone for some reason,” he said. “All I can say is when the ball comes to me I try to make the plays and it so happens when we get down to the red zone. I am not the fastest. I am smart, and I find a way to get open.”

Higgins’ three catches for 31 yards and the score are noteworthy because he was a healthy inactive the previous two games as KhaDarel Hodge cemented himself as the No. 3 receiver. But Hodge strained a hamstring Oct. 4 before the Cowboys game and is on injured reserve, so Higgins played 40 of 73 snaps against the Colts.

“He was inactive there for a couple games through no fault of his own — that is just how the numbers went — and he works so hard at practice and gives a great look,” coach Kevin Stefanski said. “He does his job, studies and prepares. He is a consummate pro. I am really proud of him, and I am happy for him that he was able to score last night.”

“It is just knowing that if somebody goes down that I know I can step into the job and fulfill the needs,” Higgins said.

He also made a key downfield block on D’Ernest Johnson’s 28-yard run on third-and-9 before the two-minute warning that helped seal the win.

“Coach believes in me,” Higgins said. “He kept me on the team for a reason. He trusts in me. The whole staff upstairs, they believe in me. They know what I am capable of.

“There is nothing like someone else believing in you more than you believe in yourself.”

Stefanski will make his debut in the Browns-Steelers rivalry on Sunday in Pittsburgh but isn’t placing extra importance on the matchup.

Offensive lineman Chris Hubbard, who played with the Steelers before joining the Browns in 2018, echoed that going 1-0 is the motto but conceded this matchup has extra juice.

“Oh, man, this is going to be fun going into this game,” he said. “The intensity of the game is going to be at an all-time high because we are a different unit this year and we have a different scheme. We are a very hungry team this year. Those are some of the things that you will see on Sunday.”

Hubbard played guard for the first time in a regular-season game Sunday when right guard Wyatt Teller left in the first quarter with a calf strain. Hubbard has spent his seven-year career at tackle, including starting 29 games at right tackle in 2018-19.

Stefanski labeled Teller’s injury “week to week,” so Hubbard will make his first start at guard against the Steelers.

“It was surreal. I never thought about playing guard in a game before,” Hubbard said. “It just never crossed my mind.”

The coaches are treating him as the sixth lineman, using him to fill in at tackle and guard. He started at right tackle in Week 2 when Jack Conklin was injured.

Hubbard said he took one repetition at guard in practice last week before being forced into action.

“For him to be able to provide depth at every one of those spots is outstanding,” Stefanski said.

THE GOING GOT TOUGH

After rushing for 307 yards against the Cowboys and averaging 204.5 through four games, the Browns were held to 124 yards on 33 carries (3.8 average) by the Colts, who entered with the fourth-ranked rush defense.

“We knew it was going to be hard, and those are some hard yards,” Stefanski said. “The guys earned every single one of those. That is a testament to their defense. It is a physical front. They run. They did a very, very nice job. We stuck with it and grinded it out. That is what the game called for.”

The Browns were without Nick Chubb, who’s on injured reserve with a knee injury, and Kareem Hunt was still dealing with a groin injury. So Johnson played 22 of 73 snaps and got eight carries for 32 yards, including the key third-down handoff late.

“We are just trying to be smart with Kareem. Very mindful of workload,” Stefanski said.

Stefanski said he doesn’t start thinking about the next opponent immediately after a game.

“I can celebrate for the remaining hours of the evening, but typically I sit down on the couch and have the TV watch me,” he said.

** Victory Monday looks a lot like Defeat Monday under Stefanski.

** Austin Hooper led the tight ends with 58 snaps, followed by Harrison Bryant with 29 and David Njoku with 21.

Kevin Johnson was the full-time nickelback, replacing the rotation of Tavierre Thomas and M.J. Stewart Jr.

Notes: Another game, another game-changing play for Myles Garrett … this time forcing a safety
Notes: Mike Tomlin’s year with Vikings connects him to new Browns staff