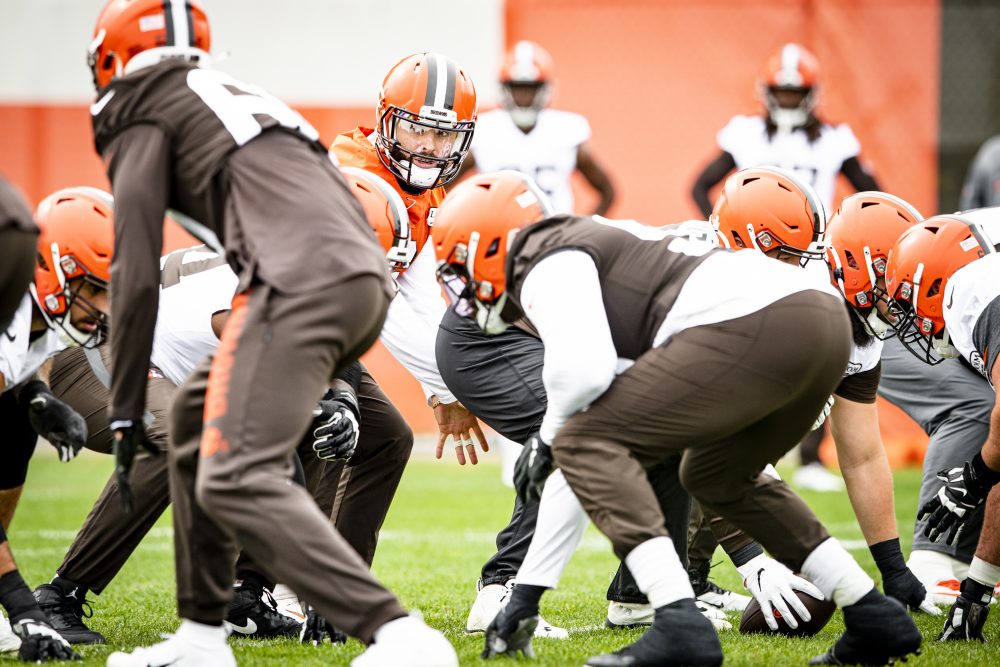 BEREA — Baker Mayfield jogged down the field and picked up a couple of footballs. He didn’t throw them, letting backup Case Keenum handle all the passing during the 10 minutes of practice open to reporters.

Mayfield was listed as limited on the official participation report Wednesday with a chest injury. X-rays on his ribs were negative Sunday after the 32-23 win over the Colts, and while he remains sore he also remains determined to play Sunday against the Steelers in Pittsburgh.

“I’m good. Just one day at a time right now. Obviously a little sore, but that’s why we’ve got the rest of the week till gameday.”

Coach Kevin Stefanski indicated Mayfield would participate in some team drills Wednesday as they managed the soreness, and a photo distributed by the team showed Mayfield taking a snap in a team drill.

The limited designation doesn’t specify how much a player participates, just that he didn’t do everything. Mayfield stretched with the team, then stood close as Keenum made all the early throws before team drills commenced.

The Browns are down to two quarterbacks after the Cowboys signed Garrett Gilbert off their practice squad Tuesday.

Mayfield took a big hit from Colts defensive end Justin Houston as he threw an interception in the fourth quarter but finished the game.

“Yeah, I mean, kinda that whole right side, everything’s intertwined right there,” Mayfield said of the injury. “I’m lucky with the way I landed that it wasn’t directly on my shoulder, kinda rolled a little bit. Obviously it could’ve been a lot worse.”

Mayfield got up with his right — throwing — arm hanging and was examined in the medical tent on the sideline. On the previous play he landed awkwardly on his right wrist but said that feels good now.

The Steelers have the NFL’s third-ranked defense (301.5 yards a game) and sixth-ranked scoring defense (21.8 points) and are driven by a ferocious pass rush, leading the league with five sacks a game. Outside linebacker T.J. Watt has 4.5, end Stephon Tuitt 3.5, outside linebacker Bud Dupree and cornerback Mike Hilton three each and tackle Cameron Heyward 1.5.

“I’m not a doctor. I’m not going to sit up here and tell you I know how bruised up he is,” Heyward told Steelers reporters. “At the end of the day I’m just trying to inflict good punishment. As a D-line and as a defense you want to make sure he’s thinking about the rush.”

Mayfield has renewed confidence in his protection after succumbing to doubts last year that affected his pocket presence and performance.

“I believe in our guys first and foremost, no matter who we are facing,” he said. “Obviously the challenge with the Steelers defense is that we are going to have ups and downs throughout this game. It is not going to be perfect, and we know that. That is what comes with these challenging games and when you play great teams.”

Stefanski said Mayfield could play even with limited work in practice, but the hope was he could do more as the week progresses.

“We will take it each day at a time here,” Stefanski said. “In terms of flak jacket and all those types of things, I just do not know. He is sore today so we will work through it today and then see where he is tomorrow.”

“I am confident, and I pray he is ready,” running back Kareem Hunt said. “He is ready to take on the challenge. He is a great player and a great teammate.”

Heyward expects Mayfield to fight through the pain. Stefanski expects the Steelers to continue to “rush with violence.”

“We play a physical game,” Heyward said. “He’s gonna come out there and try to be a warrior for his team, but it’s up to us to make him think about that injury during the game.”

“They will hit you. They try to impose their will,” Mayfield said. “That is what our division is all about. We have to play that ball, match that energy and exceed it.”

“There are certain things that just going through reads to make the easier throws, not trying to make the hard throw every time,” he said. “Just take the completions, make it easy on us and keep the chains moving.”

This is one of the most highly anticipated matchups in the rivalry in recent memory. The Browns are 4-1 and the Steelers 4-0.

“That is the exciting part about it,” Mayfield said. “Obviously division games are always meaningful for us, but they are undefeated and we are 4-1. It is an extremely important game, but that is because it is the next one. We have to handle it that way, and we are on the road in somebody else’s house.”

It’s been a house of horrors, as the Browns have lost 16 straight at Heinz Field.

“Once again, we are not worried about the past,” Mayfield said. “We are worried about right now. The next game is the most important one.”