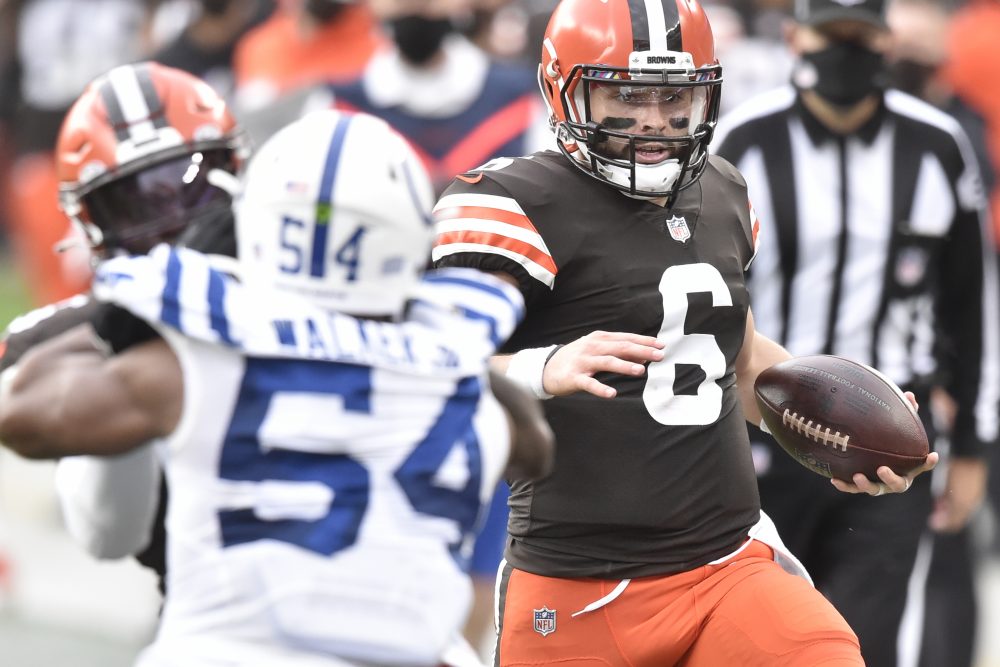 Mayfield was officially limited in practice Wednesday, but coordinator Alex Van Pelt said he only threw after practice as the athletic training staff watched. Van Pelt talked to Mayfield on Thursday morning in the training room.

“I know he is feeling better,” Van Pelt said. “He is trending in the right direction.”

The practice Thursday was moved indoors because of storms in the forecast, so reporters weren’t able to attend due to coronavirus restrictions. Stefanski said Mayfield would be limited again but do more.


Mayfield took a big hit from Colts defensive end Justin Houston on Sunday and said Wednesday his whole right side was sore. Stefanski was asked if the injury involved pain tolerance, mobility or flexibility.

“I think it is all the above,” he said. “But he is progressing.”

Mayfield has been adamant he’ll play Sunday against the Steelers in Pittsburgh. He hasn’t missed a start since taking over for Tyrod Taylor in Week 3 as a rookie in 2018.

“He is a tough son of a gun for sure,” tight end Austin Hooper said. “He sits in there, takes licks every week and handles it like a man.

“He is the leader of our offense for a reason. You do not get the respect of other grown men in the locker room without having some toughness to you. I think that is a credit to him and what he is all about.”

Steelers defensive tackle Cameron Heyward said Wednesday they want to make Mayfield think about his injury with their pass rush that leads the league with five sacks a game.

“At the end of the day I’m just trying to inflict good punishment,” Heyward said. “As a D-line and as a defense you want to make sure he’s thinking about the rush.”

“It’s a challenge. They put a challenge out and we’ve got to handle our business and do what we can to protect Baker at all costs.”

Backup Case Keenum, who hasn’t played a snap this year, filled in for Mayfield on Wednesday. Garrett Gilbert was signed off the practice squad by the Cowboys on Tuesday, so the Browns don’t have a third quarterback.

“We will work in constant communication about ways to get better at all the positions, so it is something that we definitely talk about,” Stefanski said of replacing Gilbert.

Being short-handed at quarterback seems riskier than other positions.

“You definitely have contingency plans, and you have to make sure you are smart about it from that perspective, yes,” Stefanski said.

The Browns were without their top two strong safeties for the second straight day. Karl Joseph (hamstring) didn’t play against the Colts and hasn’t practiced this week. Ronnie Harrison remained in the concussion protocol, but coordinator Joe Woods said there’s a chance he could play Sunday.

“It is really day by day with him, but I think we may get him back,” Woods said. “We’ll see. Regardless, we will have guys that will be ready to step up and play.”

Harrison returned an interception 47 yards for a touchdown against the Colts in his first start with the Browns. After his concussion, the Browns moved Andrew Sendejo from free to strong safety and inserted Sheldrick Redwine at free. Redwine had a fourth-quarter interception.

“The guys are all familiar with the defense. We have the ability to move pieces around,” Woods said. “We feel fine moving forward with Sheldrick. He showed playmaking ability as soon as we put him in a game.”

** Receiver Odell Beckham Jr. was sent home with an illness and didn’t practice.

Receiver Diontae Johnson (back) was limited after not practicing Wednesday.

Special teams coordinator Mike Priefer has made personnel changes after the Browns allowed a 101-yard kickoff return for a touchdown to the Colts. The coverage units were a strength last year but have dropped to 30th in the league on kickoffs (34.6 yards a return) and 21st on punts (8.8).

“We are going to find the right match of guys,” Priefer said. “We were the No. 1 or No. 2 kickoff team in the National Football League last year, and we do not all of a sudden get bad overnight. There are some things we are doing or personnel we are putting out there that are not good enough, and we are going to make those changes.”

He said players didn’t get off blocks and missed two tackles on the touchdown.

“Anytime you give up a score, it is unacceptable, especially here in Cleveland,” Priefer said.

Linebacker Mack Wilson was among the starters who volunteered for more time on special teams.

“He is going to be more involved, absolutely,” Priefer said.

“He is a confident young man, but he is a cerebral young man,” Priefer said. “He needs to see it. He needs to experience it. He has never been a kickoff returner before.

“He needs to return faster, like he did on that last kickoff return. I tell him he has to cut it loose — believe in his talent, believe in his ability and cut it loose. I am confident in Donovan. I think he is only going to get better.”

Cornerback Terrance Mitchell started the first five games and will stay in that role after Greedy Williams was placed on injured reserve Monday with a nerve injury in his shoulder. Williams was hurt Aug. 24 and hasn’t played this year.

“I have a responsibility to the team, and I have to do my job at a high level,” Mitchell said. “Just have to keep working so I can help the team win.”

Mitchell, 28, has made 27 starts in six-plus seasons but has never been a full-time starter. He’s in the final year of a three-year, $10 million contract signed as a free agent and has the chance to earn a big payday if he keeps playing well — 22 tackles, four passes defensed, a forced fumble — but said he’s not thinking about that.

Woods appreciates the luxury of having a proven veteran to fill in.

“We really did not know what he had in him as a player within our scheme,” he said. “He has played well throughout the early part of the season. He really bounced back last week and really challenged the receivers outside and played a nice game. It is definitely making it easier on me to make some calls with him out there.”