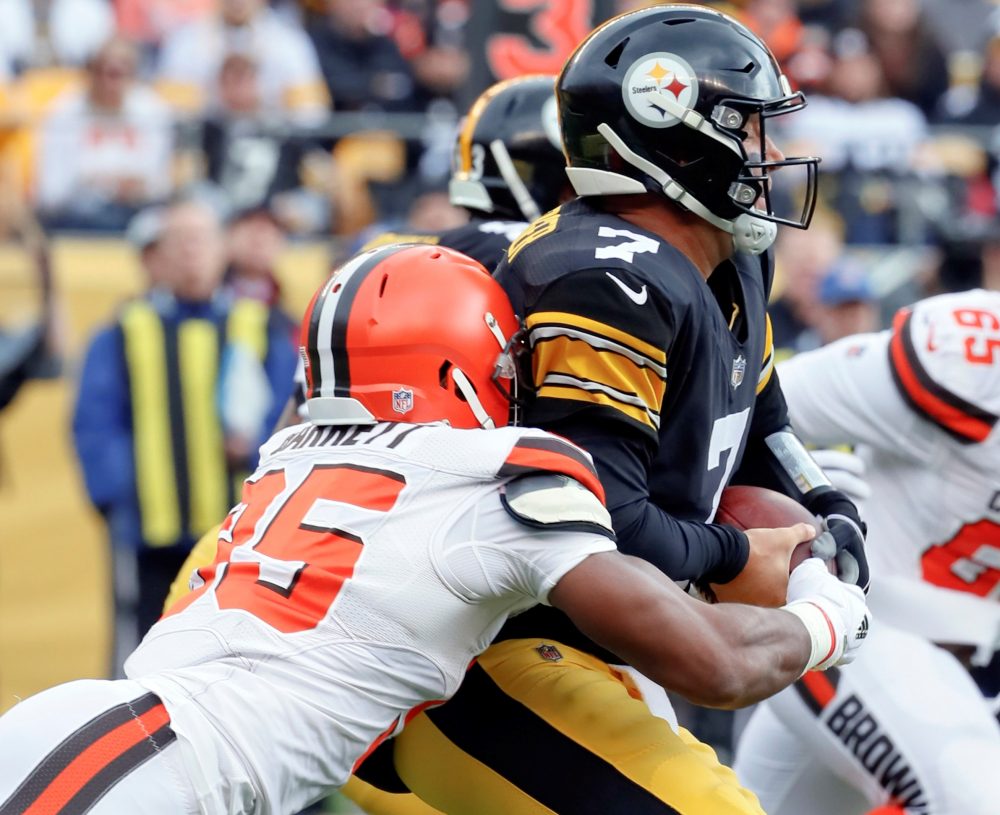 BEREA — No penalties. No drama. No looking back.

Browns defensive end Myles Garrett has a plan for his first meeting with the Steelers since he became public enemy No. 1 in Pittsburgh: Wreak havoc once the ball is snapped then be on his best behavior after the whistle blows.

“I am just ready to play between the six seconds that the average play lasts,” he said Friday. “After that, that is on them. I am not worried for any situation that we have and whenever we have to snap the ball again I will be there.”

Garrett insists he’s moved past the infamous incident Nov. 14 when he ripped off Steelers quarterback Mason Rudolph’s helmet and hit him over the head with it. Garrett was suspended for the final six games of last season but has come back with a new determination that’s resulted in a game-changing play in each week of the Browns’ four-game winning streak.

He enters Sunday’s meeting in Pittsburgh second in the NFL with six sacks and tied for first with three forced fumbles. He was asked if he’s confident the Steelers have put the fight behind them.

“We will see when we play,” Garrett said. “But I mean, their head coach said they are past it. We are past that as a team. We are just ready to go out there and play ball.”

Early in the week Steelers coach Mike Tomlin, who’s 21-4-1 against the Browns, tried to shift the focus away from the brawl that led to suspensions and fines for both teams to the matchup of red-hot rivals.

“There is a lot on the table to this game in reference to stakes,” Tomlin said. “They are a 4-1 team. We’re trying to remain undefeated. We’re not looking for that low-hanging fruit or reality TV storylines.

Cleveland’s Kevin Stefanski will coach his first game in the series but set the same tone as his experienced counterpart.

“The guys are very well aware of what is important on Sunday,” he said. “I think the guys put the focus on the game because it is a big one because of these two teams that are playing. I do not think anything from the past is going to affect this game.”

But Garrett says he’s ready if the Steelers try to bait him into a dumb penalty. He claimed Rudolph called him a racial slur before the fight escalated, which Rudolph and Tomlin vehemently denied.

“Just play within the whistle,” Garrett said. “Do not be worried about what they are doing to frustrate or knock us off our game.

Running back Kareem Hunt trusts Garrett and said it’s up to everyone to stay in control.

“We definitely have to come out, be ready to play, keep our emotions in check and keep playing in between the whistles,” he said. “That is for everybody. We have to be smart. It is going to be a long, physical game.”

Garrett told Cleveland.com before the season he’d like to clear the air with Rudolph, but that won’t be his priority Sunday as the Browns (4-1) and Steelers (4-0) battle for a spot atop the AFC North. Rudolph has returned to his role as backup for Ben Roethlisberger.

“Have not thought about it,” Garrett said. “Focused on how I am going to get to Ben. I will cross that bridge when I come to it whether that is down the road or whenever we see each other. I am focused on the game plan and getting the win. That comes secondary.”

Roethlisberger, 38, looks fully recovered from an elbow injury that sidelined him for the final 14 games last year and required surgery. He’s completed 69.9 percent with 10 touchdowns, one interception and a 110.4 passer rating.

Garrett has sacked him three times in two meetings — a tie at FirstEnergy Stadium and a Steelers win at Heinz Field, where the Browns have lost 16 straight. Roethlisberger is 22-2-1 as a starter vs. the Browns.

“I feel like I have got him a couple times personally but us as a team we have to pick it up and get some wins in their house,” Garrett said. “We have some confidence going in and I know they are confident with the record they have and it will be a good AFC matchup. I believe in the guys we have in our room and I think we can beat him.”

Roethlisberger excels in getting rid of the ball in a hurry but has been sacked six times as he searches the field for his variety of weapons — receivers JuJu Smith-Schuster, James Washington, Chase Claypool and Diontae Johnson (ruled out with a back injury) and tight end Eric Ebron.

“We will get our chances where he will hold onto the ball a little bit more or we will confuse him and have him looking at our coverage instead of us and try to get the ball out of him,” Garrett said. “We will have opportunities and just have to make sure that we are there when he tucks it or he pumps it.”

Garrett had a strip-sack in three straight games, then forced the Colts’ Philip Rivers into a safety Sunday with pressure around the edge.

“He keeps making plays, and we are trying to lead this team by example and vocally,” quarterback Baker Mayfield said. “He is doing an incredible job of being more vocal. We are proud of him.

“When his voice is heard, it radiates throughout the building. For starters, that is why he has such an impact this year, not just on the field but off.”

Garrett said he’s treating this as “just another ballgame,” but the crowd expected to be around 5,000 will certainly carry a grudge.

“We are the Browns. I expect to get booed, especially when there are any fans in the stadium,” he said. “Just go out there and do it like we would against any team.”