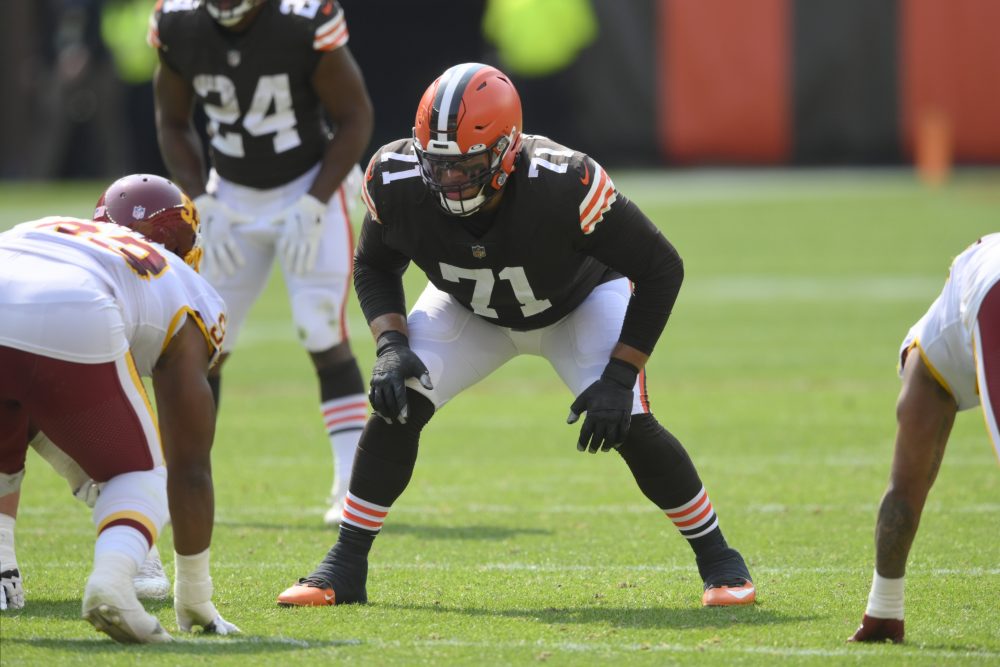 The quiet is unsettling for left guard Joel Bitonio. And not because Bitonio is one of the team’s best conversationalists.

As the offensive line meets to install the game plan and scrutinize the opposition, rookie left tackle Jedrick Wills remains silent. That leaves Bitonio to wonder if the man counted on to protect Baker Mayfield’s blindside grasps the instruction.

“He is such a quiet guy that I talk to him a lot and I hope he understands,” Bitonio said. “He is just like a quiet dude, and then we get out there and he does not make mistakes. He does not make simple assignment errors.

“He comes out there and he is doing the right assignment, which is a huge step that you put yourself in the right position.”

Wills is used to his personality leaving people perplexed. He had to explain himself throughout the draft process.

“That was a lot of the teams’ biggest questions because all of my coaches said they could never get a read on me,” Wills told The Chronicle-Telegram by phone Thursday. “But in reality, I’m just trying to lock in. Just minding my business.”

Business has been good for the 21-year-old who was the No. 10 pick in April.

He’s part of a line that’s allowed only seven sacks in five games. And of the five tackles taken in the first round, he’s earned the highest grade (77.9) from Pro Football Focus.

His coaches and teammates also sing his praises.

“To be honest, I just try to play,” Wills said. “I don’t really pay attention to the grades or anything like that. I don’t ever ask my coach, ‘How did I do? What was my grade?’ I just play to win.”

The Browns won their fourth straight Sunday against the Colts. Wills thought he played well overall but was kicking himself for allowing a sack and a pressure. He called the sack by Al-Quadin Muhammad “bogus.”

“I just took a bad angle. He dipped the corner on me,” Wills said. “There’s guys that are good across the league on every single team no matter if they’re big names or not. If anything like that happens, they’re getting paid for a reason, so they’re not just going to brush it off. They’re going to finish the play.”

Steelers outside linebacker Bud Dupree might not be a superstar, but he was the No. 22 pick in 2015, broke through last year with 11.5 sacks and has three in Pittsburgh’s 4-0 start. The Steelers don’t move him around much, so Wills will see him for about 60 snaps on Sunday at Heinz Field.

“He’s got a high motor,” said Wills, who’s already faced veteran pass rushers DeMarcus Lawrence of the Cowboys and Justin Houston of the Colts. “He’s a veteran guy that’s been in the league for a while, so he has a lot of things in his toolbox.

“He just plays with a lot of aggression. You don’t see that from a lot of people. You see a lot of pass rushers who wait till third down to kind of amp it up a little bit. He pretty much brings it on every play.”

“Jed has been playing really well and at a high level from the start of the season,” he said. “That is just a different type of pass rusher now, a guy with tremendous speed and speed to power off that edge.”

The Steelers, as usual, are stacked across the defensive front. T.J. Watt is the outside linebacker opposite Dupree — right tackle Jack Conklin draws the difficult assignment — with Cameron Heyward, Stephon Tuitt and Tyson Alualu inside. They lead the league with five sacks a game and rank third overall defensively, presenting another stern test for Cleveland’s fortified line.

“I do not think they have a weak spot in the front seven,” Bitonio said.

Pittsburgh’s zone blitzes and 3-4 scheme are different than the Browns see from most teams. The adjustment requires extreme attention to detail, which doesn’t sound like a problem for Wills.

“It’s slightly different, but in reality, when you do training camp, you review all those looks,” he said. “You go through the whole playbook so you review all your rules.”

“He is a quiet guy, but he is always in there, he is focused, he is taking notes and he is ready to work in practice,” Bitonio said.

The worry when Wills was drafted was that he’d never played left tackle. He was a right tackle in high school and at the University of Alabama, but the Browns were confident he could make the switch.

Wills has made it look easy.

“He is conscientious,” coach Kevin Stefanski said. “He does a great job.”

Wills, who reveals parts of his personality on social media, bought his mom, Sivi, a 2019 Lexus SUV last week and surprised her with it during her trip to Cleveland to watch the game. The special gift was always part of his NFL dream, then the timing made sense when her old Trailblazer broke down.

“She had been driving the same car since I’ve been growing up,” Wills said. “I have a younger brother and sister at home who she still travels around with, gets them to and from. It was just time.”

Sivi, got a ride to town with Wills’ dad — they’re not together — but drove back to Lexington, Ky., in style.

“She loved it,” Wills said. “She’s been talking about it for the past couple days. So do my younger brother and sister. It’s good for them having a set of wheels to get around in.

“She’s just done everything for you for so long. It’s like the least we can do for her.”

Sheldon Richardson sacking the QB, motivating Myles Garrett and missing the fans in team’s fast start
Rashard Higgins came long way to be in position to have huge game in win over Bengals