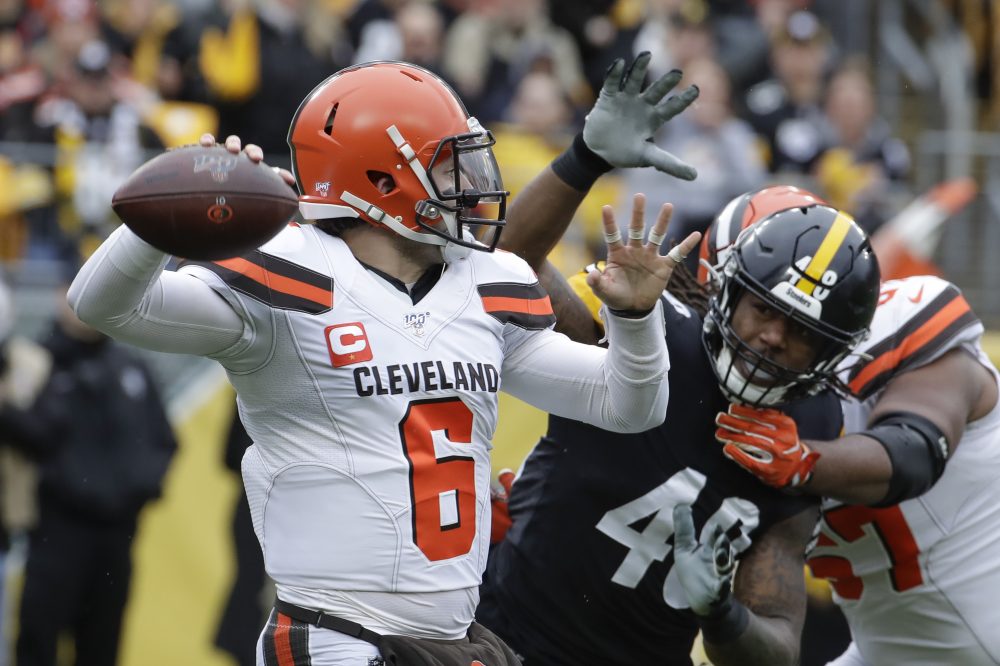 Cleveland defensive end Myles Garrett is an expert at putting pressure on the quarterback.

He piled a ton of it on the Browns and Steelers in a Zoom interview Friday.

“This will be a defining game for both of us,” he said. “How the rest of the season will play out will probably be resting on this game because of how much importance it plays for where we will be in the division and who will fall.”

As much as coach Kevin Stefanski wants his team to treat each game as its own entity, that’s a difficult request when it’s Steelers Week. It becomes impossible when so much is at stake.

“I am loving it. Our guys are loving it. It is an opportunity to have home-field advantage through the playoffs,” veteran run game coordinator/running backs coach Stump Mitchell said. “You have to look ahead. You can’t just look at one game when you are talking about what you are trying to accomplish — that is to win the division, get in the playoffs and then go all the way. That is the goal.

“We know they are playing at their home. We are intending to go up there and give it our best.”

The Browns will have to slay a few demons to win five in a row for the first time since 1994 — also the same season they were last 5-1. They’ve lost 16 straight at Heinz Field, coach Mike Tomlin is 21-4-1 against the Browns and quarterback Ben Roethlisberger is 22-2-1.

While the history is daunting, the present is trying. Running back Nick Chubb (knee) and right guard Wyatt Teller (calf) are out, and quarterback Baker Mayfield (ribs) and receivers Odell Beckham Jr. (illness) and Jarvis Landry (hip/ribs) were limited in practice.

Mayfield and his two favorite targets are expected to play despite being listed as questionable, but the offense will need to overcome the lack of practice time by its biggest names to stay hot and keep up with the high-powered attack led by Roethlisberger, who’s back after season-ending surgery a year ago. The Steelers scored 26 points in all of their wins, peaking at 38 last week vs. the Eagles.

The Browns have been even more explosive in their four-game streak. They’re fourth in the league with 31.2 points a game, and that jumps to 37.5 if the 38-6 opening loss to the Ravens is removed. They’ve scored 30 in four straight games for the first time since 1968.

Tight end Austin Hooper believes the best is yet to come.

“Absolutely. To be honest, that is the coolest part about all this,” he said. “It is really encouraging to know that we are playing at a solid level, but every game we still feel like we leave so much out there.”

Outside linebacker T.J. Watt leads the way with 4.5 sacks and has a league-best 15 forced fumbles since being drafted in 2017. The 3-4 scheme with wrinkles and hard-charging, playmaking outside linebackers Watt and Bud Dupree make life difficult for offenses trying to run or pass.

The Browns will counter with their wide zone run scheme and play-action pass game that includes bootlegs by Mayfield. Neither will work without the tackles winning the battles on the edge.

“They do a nice job of trying to close everything in, but we are going to have to strain to get those runs off of the wide zone,” coordinator Alex Van Pelt said.

The Steelers lead the league with five sacks a game. The Browns have allowed only seven sacks (tied for eighth fewest) and 22 pressures (best in the league).

Mayfield will need time to survey the field — and try to exploit Pittsburgh’s vulnerabilities in pass coverage — especially as he deals with the sore right side that bothered him all week. The Browns are 11-1 when he has a passer rating above 100, and he had eclipsed the mark three straight times before an awful second half against the Colts. His best showing against the Steelers was a 92.3 last year in his lone win in three tries.

“They bring a physical challenge. They bring the muddied pockets. They will hit you. They try to impose their will,” Mayfield said. “We have to play that ball, match that energy and exceed it.”

The country will be watching to see if the Browns are really different this year. CBS’ top broadcasting crew of Jim Nantz, Tony Romo and Tracy Wolfson will call the game.

“I am brand-new here so all I know is the feeling that has been in the building has been this quiet confidence, and that is all I have experienced,” Hooper said. “I feel like it is indicative of how we are doing this year.”

Garrett, whose last appearance against the Steelers ended with him hitting quarterback Mason Rudolph over the head with Rudolph’s helmet, has been with the Browns three years longer than Hooper. He also senses the jump in confidence and knows what a win in Pittsburgh would do.

“It could definitely energize the fans here and the franchise, seeing that they are a team that is ranked ahead of us right now in the AFC and in most of the rankings,” Garrett said. “We get a win there, most people will give us some respect this year to see us as a legit team across the league. And from then on, we have to prove it week in and week out. It does not stop then.”