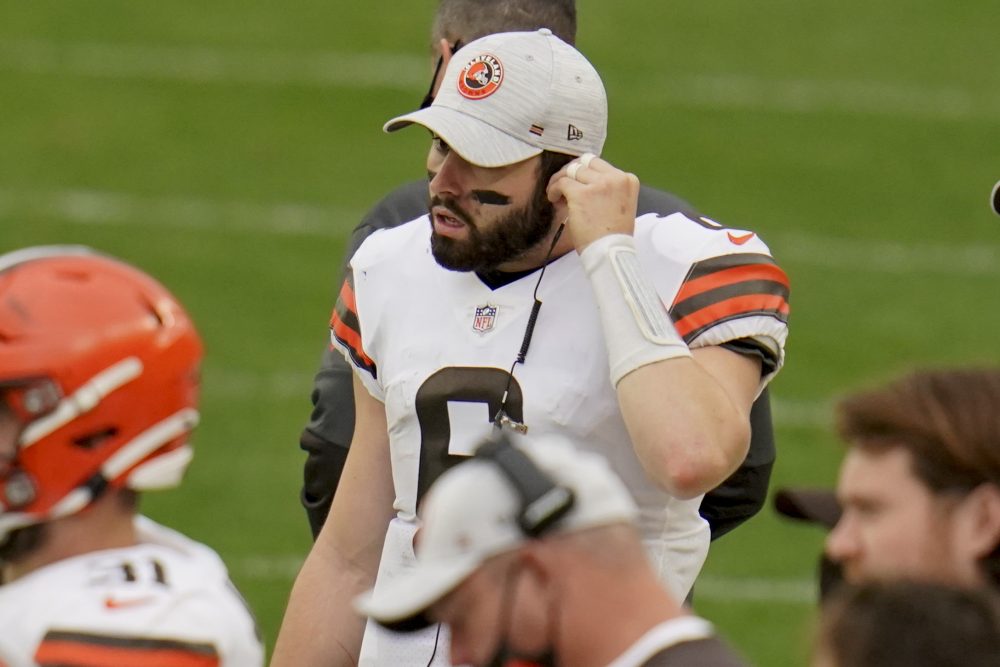 The Steelers sacked him four times. They clobbered him on numerous other occasions, whether he was throwing downfield or trying to set up a screen. They gave him bruises on the left side to match those on the right obtained a week earlier against the Colts.

Feeling responsible and realistic, Stefanski pulled Mayfield with 48 seconds left in the third quarter Sunday in the 38-7 loss at Heinz Field. The Browns were trailing 31-7 at the time, and Case Keenum finished up in his first action of the year, going 5-for-10 for 46 yards.

Stefanski said there’s no decision to be made: Mayfield will get the call next week against the Bengals in Cincinnati.

“Baker will start as long as he’s healthy and I think he will be,” he said.

But Sunday afternoon Stefanski had seen enough of his quarterback with a black jersey, or two, tattooed to his back. Enough of Mayfield being taken to the turf quickly then slowly scraping himself off it. Enough of 295-pound Cameron Heyward driving Mayfield’s left shoulder into the ground while outside linebacker Bud Dupree held his legs — a hit that sent Mayfield to be checked by the medical staff at halftime.

“I didn’t want to see him hit one more time and I put that on myself,” Stefanski said. “We came into this game knowing we had to keep him clean and we did not do a god enough job, obviously.

“He’s a very, very tough player and I know he wants to fight. But it’s a long season, we’ve got a game next week and I didn’t think it was the right thing to put him back out there.”

Mayfield objected, even though he missed practice time during the week with sore ribs, which he said didn’t affect his performance. He went 10-for-18 for 119 yards, a touchdown, two interceptions and a 54.9 passer rating. He’s 1-3 in his career against the Steelers.

“Of course, I did,” he said of wanting to keep playing. “That’s the nature of being a competitor. That’s just who I am.”
He understood the decision.

“Yeah, I’m focused on the here and now, and I want to get out there and have some success, but in his words, he’s got a big-picture mindset so you just gotta roll with the punches,” Mayfield said.

He was already gearing up for another long week.

“Do the same thing I did last week — bust my ass through rehab and get physically ready to play,” he said.

His teammates have his back and appreciate the effort.

“I told him to keep his head up,” receiver Jarvis Landry said. “Obviously we are going to ride with him regardless. He is one of the toughest guys in the building. What he is dealing with, nobody is dealing with. He came out here and did the best that he could.”

The chest area of the No. 1 pick in the 2018 draft is the immediate concern for the Browns. Right behind are his struggles against quality opponents.

The Browns have played three of the league’s top defenses — the Ravens in Week 1, the Colts last week and the Steelers. With the exception of a first half against the Colts filled with good fortune, Mayfield has been abysmal.

He threw a first-possession interception in the 38-6 opening loss to the Ravens and topped that with a pick-six on Cleveland’s third offensive play Sunday for a 10-0 deficit 6:02 into the action. He didn’t see safety Minkah Fitzpatrick waiting in the middle of the field as rookie tight end Harrison Bryant ran a slant on third-and-3 from the Cleveland 28-yard line.

“I have to see Minkah coming down in the robber coverage and helping out,” Mayfield said. “I have to take care of the ball.”

The second interception — his fourth in less than four quarters — came after pressure from outside linebacker T.J. Watt. Mayfield looked like he threw it up for grabs but said he had a plan.

“I’ve got to put it where only Higgy can get it and if not, it’s out of bounds,” Mayfield said, referring to receiver Rashard Higgins.

The Steelers took over at midfield, scored four plays later and led 24-0 with 5:43 left in the second quarter. The game was effectively over, but Mayfield remained in to lead one touchdown drive, capped with a 13-yard throw to Higgins, and absorb more punishment.

The Browns offensive line earned praise throughout the four-game winning streak that was snapped Sunday but was overmatched against Pittsburgh’s front seven.

“I’ve got to do a better job of getting the ball out and protecting those guys with a team like that and their pass rush,” Mayfield said.

The lopsided loss was like a tough blow for a team trying to earn respect inside the AFC North. Especially after the opening embarrassment to the Ravens.

“Not discouraging,” Mayfield insisted. “No matter the score, this only counts as one. The good thing is we play both those teams again and we can learn and get better.”