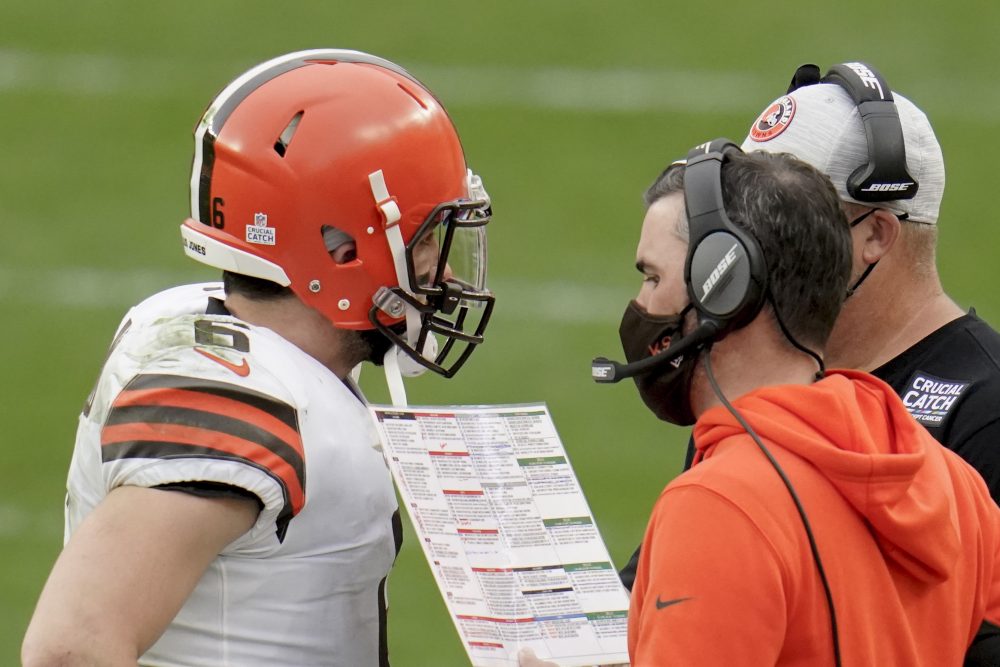 As you’re wrapping your head around the fact that in games against division bullies Baltimore and Pittsburgh the Browns have been outscored 76-13, let us consider the Browns’ top five failures in their 38-7 train wreck in Pittsburgh on Sunday:

The Browns’ two lines have been areas of strength this year, but on Sunday the Steelers’ lines were areas of domination. Caught in the crosshairs of one side of that domination was the bruised, battered and beleaguered Mayfield.

He only played about three quarters, but he shouldn’t have played at all.

At times he looked like a little puppy trying to cross the street during rush hour. The denizens of the Steelers’ pass rush clearly knew that the wounded Mayfield was hurting, and that he would struggle with mobility. That meant finding him was easy, and neutralizing him a breeze.

At one point in the second quarter Mayfield’s quarterback rating was 1.2, which I believe is the rating all quarterbacks get for merely getting off the team bus.

He threw two horrendous interceptions, one a pick-six wild pitch that put the Browns in an early 10-0 hole. Mayfield spent most of the rest of his time in the game being knocked to the ground, being helped up, then being knocked to the ground again. When he wasn’t being knocked down, helped up, or was bent over holding his ribs, he was 10-for-18, for 119 yards, one touchdown, two interceptions and he was sacked four times for 20 yards. The Browns were a combined 1-for-15 on third and fourth down, and Mayfield was at the wheel for most of that.

Why he was at the wheel at all is the mystery.

It’s a testament to Mayfield’s competitiveness, and coach Kevin Stefanski’s loyalty. But it was a monumental miscalculation by everyone involved, the monumental-ness of it being reflected by the menacing opponent, and the final score.

Mayfield was limited in practice last week due to sore ribs, and going into the game he was listed as questionable. That’s also an apt description for the decision to let him play at all.

If there is one team in the NFL that a short quarterback with banged up ribs, playing behind a short-handed offensive line (Wyatt Teller was out with a calf strain), facing a pack-of-wild-dogs defensive line should never be asked to compete against, it was the team the Browns played Sunday.

The Steelers probably smelled blood in the water at the pregame coin flip. Mayfield was a marked man before the Steelers started leaving marks on him, which they did, seemingly, on almost every play.

Mayfield was a sitting duck throwing wounded ducks from the pocket, and the results were predictable.

Also predictable was Stefanski’s explanation for finally, mercifully, removing his sitting duck from the game late in the third quarter, which was about three quarters too late: “I didn’t want to see him get hit one more time. That’s on me. I can’t allow him to get hit like that.”

Mayfield wouldn’t have gotten hit at all if he didn’t play. But he played, and he got hit. A lot. Despite Sunday’s loss, the Browns are still in the hunt for a spot in the playoffs. Every remaining game is an important one. Risking further injury to an already wounded quarterback could have put his availability for future games at risk.

If the Browns were playing one of the dregs of the NFL on Sunday, maybe it’s worth the gamble. But playing him against the Steelers’ ravenous defense? The risk-reward there seemed like a bad wager.

The Browns’ Teller-less offensive line, moreover, was no match for Pittsburgh’s pit bull defensive line, although Mayfield, to his credit, took one for the team.

“I’ve got to do a better job of getting the ball out of there, and protecting those guys,” he said of his linemen.

Let’s not forget, also, that Mayfield personally has a lot riding on this season. He’s playing for his next contract and, after last year’s disaster, his resume needs some polishing. That’s hard to do when you’re sitting out a game. But not many opposing quarterbacks polish their resumes at Heinz Field.

“Baker missed significant practice time, but we’re not in the business of making excuses,” Stefanski wqie. “We just didn’t get it done today.”

Maybe they wouldn’t have gotten it done by starting backup Case Keenum, either. Or maybe they would. Either way, it would have given Mayfield’s ribs another valuable week of recovery time.

Browns-Steelers Preview: 3 things to watch, 3 key numbers, the prediction
Analysis: Despite plenty of cause for concern, it’s too early for Browns to panic about, give up on Baker Mayfield