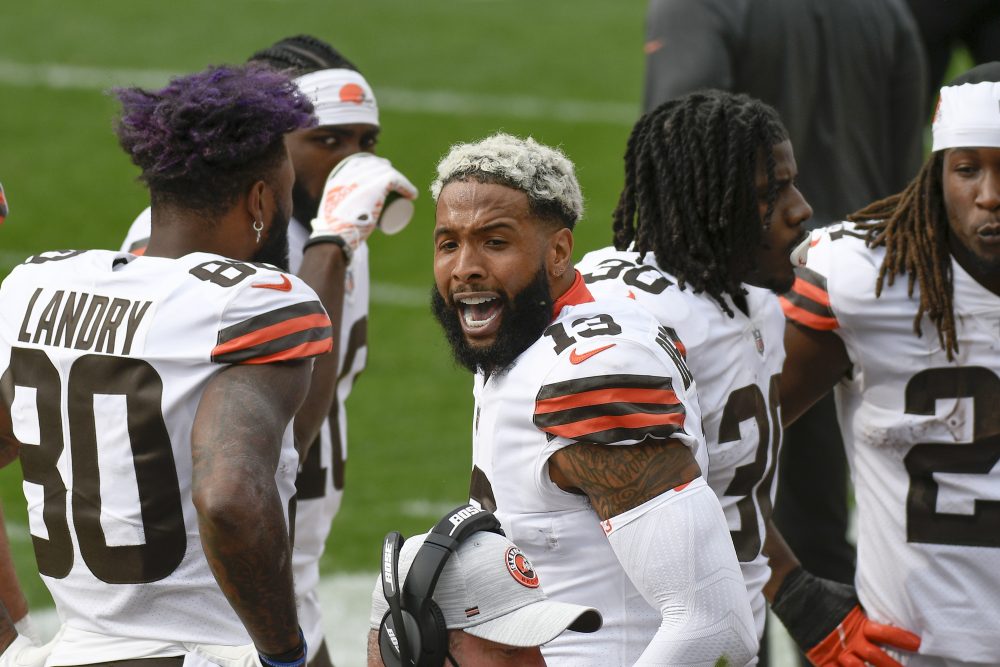 Odell Beckham Jr. slammed his helmet to the ground on the sideline and took off his cleats Sunday after he had been removed with 8:08 left in the fourth quarter of a 38-7 loss to the Steelers at Heinz Field in Pittsburgh. He watched in socks before putting on sneakers.

“Just normal frustration when you come out and you get beat like that,” coach Kevin Stefanski said. “You just have to make sure one (loss) does not turn into two.”

Fellow receiver and best friend Jarvis Landry wanted the focus to be on what Beckham did on the sideline earlier in the game. With his offensive teammates gathered, Beckham gave a pair of passionate speeches to rally the troops.

“We are all invested,” Landry said. “He brought us together as a leader of this team there right before halftime and after halftime and just kind of talking and positive messaging.

“He was trying to get us going because we could not get in any type of rhythm.”

Beckham’s history of sideline blowups follows him — he famously fought a kicking net — so the actions could be perceived as histrionics and become a topic on talk shows across the country.

He caught only two passes for 25 yards, his lowest output by far since the opening loss in Baltimore. He has 23 catches for 319 yards and three touchdowns in the 4-2 start, and added a rushing touchdown.

Baker Mayfield threw high to him along the sideline early, forcing him to leap and allowing him to get pushed out of bounds by cornerback Joe Haden for an incompletion.

“We are all very frustrated,” Mayfield said when asked about Beckham. “We want to win. We do not come out here just to get stats and do all that. We come out here to win.

“It is a frustrating loss for us knowing that we just did not play well and let a great team capitalize on all those mistakes that we made. We are all frustrated.”

No punches, no ejections, no accusations.

Defensive end Myles Garrett’s first game against the Steelers since clubbing quarterback Mason Rudolph with a helmet passed without incident.

“It is just a game to me,” said Garrett, who was out of the game when Rudolph entered the blowout. “It is just about playing ball. With these guys, it was all love and it is all football. We did not have any problems. There was respect during and after the game.”

Steelers coach Mike Tomlin strongly defended Rudolph last year and in the offseason when Garrett said Rudolph called him the N-word before the brawl. Garrett talked to Tomlin before the game, putting his arm around the coach.

“Talking to him had nothing to do with last year,” Garrett said. “Him, his brother, my mother and my uncle all went to school together in Virginia so we were just talking about that.

“He said, ‘Good luck, live your life, have fun and tell your mother I said hello.’”

ESPN reported before the game both owners told their teams they’d have zero tolerance for altercations.

Garrett had four tackles and a sack, extending his streak to five games. He joins Anthony Pleasant in 1995 and Reggie Camp in 1984 with the longest streaks in franchise history.

The Browns rushed for 75 yards after leading the league with 188.4 a game through five weeks. They averaged 3.4 a carry after entering at 5.5.

“This is a group that thrived — to the tune of 188 yards per game,” Tomlin said. “We didn’t wait till the end of the week to acknowledge that we couldn’t allow that to happen. Today is really kind of born out of our commitment to minimizing that element of play and it came together for us.”

The Browns rely on the run game, so the lack of success hurt the passing game.

“It was tough. It is a part of who we are,” Landry said. “They have a bunch of big, talented guys on their side, as well.

“They knocked us back. On plays where we are running gaining 5 to 6 yards, we were only getting 2 today. That is something we must figure out, find ways to get better and adapt. We need to find ways to make those runs go and open up the passing game.”

Kareem Hunt led the way with 13 rushes for 40 yards, and Stefanski was asked if the Browns felt the absence of running back Nick Chubb, who missed his second game with a knee injury.

“I do not think that is fair,” Stefanski said. “We will get Nick back when he is ready, but we are going to ride with the guys we have, and we have plenty of guys that I feel strongly about.”

The offensive line was rated near the top of the league but didn’t hold up against the Steelers’ front seven. Mayfield was sacked four times in less than three quarters and hit many more.

“There is no weakness,” Bitonio said of the Steelers. “Upfront they don’t have a guy that you can kind of spotlight and be like ‘Hey, this is the guy we can go after.’

“They have five good rushers and two good linebackers that play well for them.”

The Browns were without right guard Wyatt Teller, who was replaced by Chris Hubbard.

“It wasn’t one guy every play,” Bitonio said. “It was just play to play a guy got beat or someone missed their gap, and that is how you lose to a fundamentally sound team like Pittsburgh.

“They have a guy in every gap, and if you don’t win, they are going to make a play.”

Left-footed punter Jamie Gillan (left groin) was able to kick despite being limited Friday and listed as questionable. He had a long of 59 yards and two inside the 20-yard line.

** The Browns reported no new injuries.

Notes: Baker Mayfield looks good throwing, listed as questionable
Notes: Kevin Stefanski says Baker Mayfield not as sore as he was a week ago, expected to practice more this week, start vs. Bengals