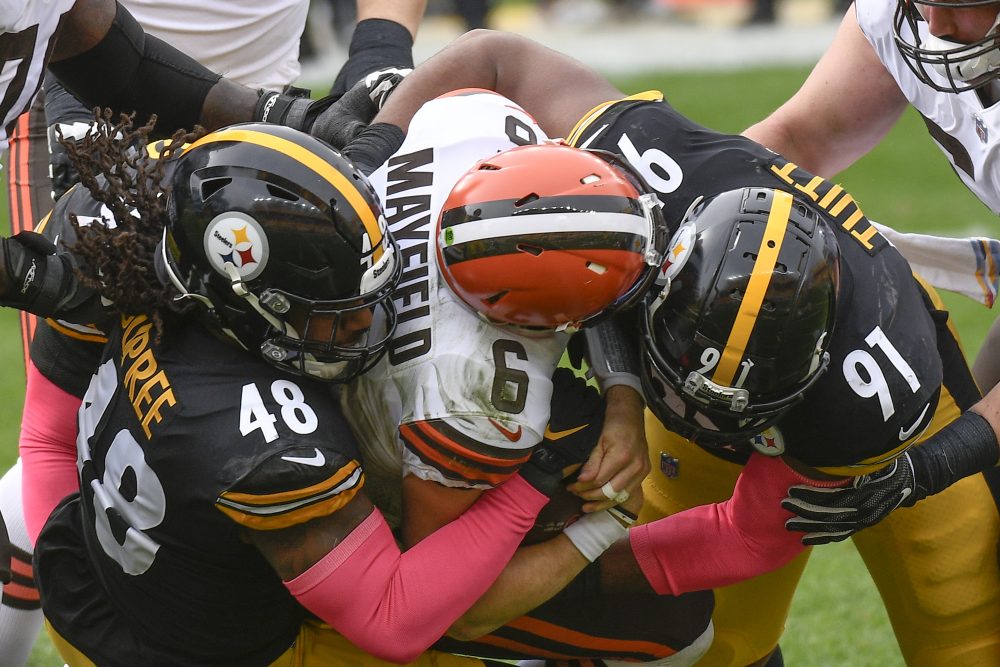 The four-game winning streak was already a distant memory as Baker Mayfield, Odell Beckham Jr., Jarvis Landry and Myles Garrett stood on the sideline in the fourth quarter of the blowout.

The fans’ positive vibes had been replaced by disappointment and doubt after the Steelers throttled the Browns 38-7 on Sunday to extend Cleveland’s losing streak at Heinz Field to 17. The Browns fell to 4-2 and third place in the rugged AFC North, while the Steelers remained alone on top at 5-0.

The defeat was devastating by itself. Coupled with the 38-6 opening embarrassment in Baltimore, the misery was magnified and the skepticism substantiated.

“It is one game. We will see them again and then you will be able to measure how we stack up against either of them,” said defensive end Myles Garrett, whose reunion with the Steelers was uneventful. “Until then, just leave it as it is. They had our number. We have a game plan, we adjust, come back and we will be at full strength by then.”

Mayfield entered with sore ribs, took a beating and was replaced by Case Keenum with 48 seconds left in the third quarter. Mayfield was sacked four times, and the biggest hit came on an incompletion at the end of the first half in which defensive tackle Cameron Heyward hit him high and drove his left shoulder into the ground as outside linebacker Bud Dupree had Mayfield’s legs wrapped.

“It is something that I have to do way better,” first-year coach Kevin Stefanski said. “I can’t let him get hit like that.”

Mayfield went 10-for-18 for 119 yards, a touchdown, two interceptions and a 54.9 passer rating. He’s 1-3 in his career against the Steelers and continues to struggle against the league’s best defenses. Stefanski said he’ll start next week in Cincinnati.

“We just got outplayed today,” Mayfield said. “That is what happens when you do not execute. Like I said after the Ravens game, great teams capitalize on your mistakes, and they did. That is why the difference is that drastic.”

The Browns remain firmly in playoff contention. But as many strides as they’ve made, they haven’t sufficiently closed the gap on their biggest rivals.

Many of the strengths in the first four-game winning streak since 2009 were weaknesses in the matchup with the Steelers.

Stefanski’s play calls didn’t work and helped contribute to the punishment Mayfield took. The Browns entered converting 45.2 percent of third downs but went 1-for-12 on third down, 0-for-3 on fourth down and totaled 220 yards.

The offensive line repeatedly lost the battle in the trenches, as the top-ranked running game managed 75 yards and 3.4 a carry — Kareem Hunt was dropped for a loss on fourth-and-1 in the third quarter — and Mayfield was under constant duress.

And the general offensive explosiveness and effectiveness was nowhere to be found.

The start told the story.

The Steelers took a 3-0 lead on their first possession, then on the Browns’ third offensive play Mayfield was intercepted by safety Minkah Fitzpatrick, who returned it 33 yards for a touchdown. Mayfield threw for rookie tight end Harrison Bryant on a slant but didn’t see Fitzpatrick, who was sitting in the middle and waiting.

The Browns fell behind 24-0 in the second quarter after a second Mayfield interception — his fourth in four quarters — and never challenged.

“Bottom line, got beat. Credit to them,” Stefanski said. “We did not do anything right obviously.”

The Steelers’ domination took much of the attention off Garrett, whose last meeting with the Steelers ended with him clubbing quarterback Mason Rudolph over the head with Rudolph’s helmet.

Garrett extended his sack streak to five games, but Garrett was mostly quiet as the Steelers controlled the action on both sides of the ball.

The Browns had scored at least 32 points in every game since the opener, but the Steelers kept them from getting comfortable and doing what they do best. Beckham caught two passes for 25 yards, and Landry three for 40. Mayfield, Beckham (illness) and Landry (hip/ribs) missed practice time during the week.

“There is no excuse,” Landry said. “I think we all still prepared well. We stayed extra on Friday and Saturday to make sure that the things that we missed we were up to par on. I would not say there were a lot of MEs (mental errors). It goes back to the two things that lost us the first game — penalties and turnovers — and we had a lot of those.”

The Browns lost the turnover battle 2-0 and were penalized seven times for 55 yards.

They rebounded from the loss to the Ravens in Stefanski’s first game with a win over the Bengals to start the streak. They face the Bengals on Sunday in Cincinnati looking to repeat history.

“Very confident. Look at what we did bouncing back from the Baltimore game,” linebacker B.J. Goodson said. “I have all the confidence in the world in all of the guys.”

“With any loss, you can’t let it linger,” Stefanski said. “You learn from it and you move on. You can’t dwell on these things. The next one is coming.”

The Browns showed plenty of pluck in the postgame Zooms, with many mentioning they’ll see the Ravens and Steelers again — Baltimore on Monday night Dec. 14 and Pittsburgh in the finale Jan. 3, both at home.

“We can’t get hung up on today because the great teams don’t do that,” Goodson said. “We have to get back to work and get better.

“We get a chance to play these guys again, and I am looking forward to it.”

Baker Mayfield wanted to stay in, but Kevin Stefanski decides the right thing was sparing him further punishment
As Browns look to move past blowout loss to Steelers, Denzel Ward still believes they can compete with AFC North’s best