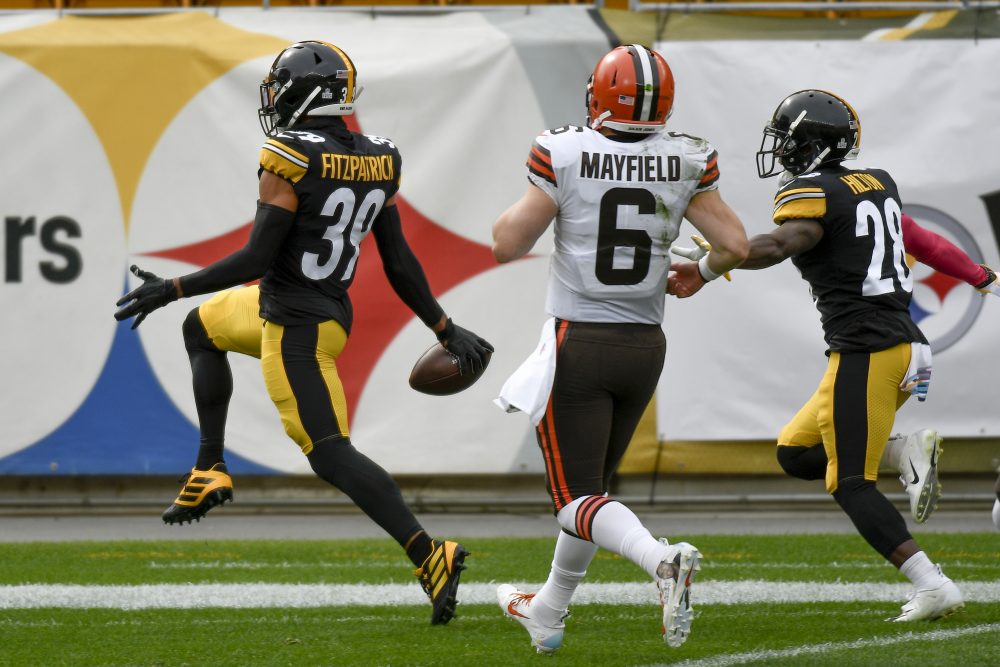 The facts make a compelling case.

The Browns have been outscored 76-13 in their two losses — 38-6 in Baltimore in Week 1 and 38-7 in Pittsburgh on Sunday. The demolitions are the latest in two decades of the Browns being dominated by their division archrivals. Baker Mayfield, the No. 1 draft pick in 2018, was confused and controlled by the defenses and outclassed by the opposing quarterbacks in the blowouts.

Yet cornerback Denzel Ward doesn’t see the lopsided losses as evidence the Browns remain on a level below the Steelers (5-0) and Ravens (5-1), who look like legitimate Super Bowl contenders. He points to Cleveland’s 4-2 record as proof it’s closed the gap in the heavyweight AFC North.

“No, I do not believe that they are necessarily on a different level,” Ward said Monday. “I don’t think the final score was a tale of how the game went. We let some things get away from us, but we could definitely compete with these teams and compete with whoever in the league. There are just things we have to work on.”

The beatdown at Heinz Field — Cleveland’s 17th straight loss in Pittsburgh — was particularly crushing because the Browns had played so well during a four-game winning streak. This was their chance to show the world they belonged in the discussion of AFC North contenders, and Myles Garrett had declared it “a defining game” for both teams.

First-year coach Kevin Stefanski didn’t dismiss the debacle but refused to be defined by it.

“My message to the team today is No. 1, you have to own it. No. 2, you have to learn from it. And then once you do those two things, you have to move past it,” he said. “That is what today is for, and the players are meeting with the coaches as we speak doing those.”

The Browns are right when they point out even the league’s good teams lose a handful of games during a season. But how and to whom matter.

Getting beat by a rival always stings, but positives can be taken from a well-played defeat. Getting skunked by a rival can linger and steal confidence.

The Browns may be able to claim a wild card spot in the playoffs this year even if they get swept by the Ravens and Steelers, but that wouldn’t stop them from being second-class citizens in the division.

Right tackle Jack Conklin is new to the North but feels it’s way too early in the season to make assumptions about anything. He was on the Titans last year when they started 2-4 then made it to the AFC championship game.

“We are a new team, a new coaching staff. We are still figuring stuff out,” he said. “Obviously you do not want to get beat like that anytime, but there is a lot of learning experience. Luckily we get two more cracks at those teams.

“Our best ball is still in front of us.”

Their worst ball was Sunday. They did so many things poorly.

Mayfield threw a pick-six on the third offensive snap. The line didn’t protect Mayfield, who entered with sore ribs and was sacked four times and drilled many others. The defense didn’t get a takeaway and Mayfield threw two first-half interceptions that turned into 14 Steelers points. The defense gave up 101 rushing yards to James Conner and long receptions to James Washington and Chase Claypool.

“We got away from a lot of things that we were doing to win some ballgames,” Stefanski said. “If you do not play clean on the road against a good team, you are not going to come away with a victory.”

Stefanski was hard on himself Sunday and Monday. He’s the offensive play caller, and the Browns managed one touchdown and 220 yards and went 1-for-12 on third down and 0-for-3 on fourth down.

“There are plays that we ran yesterday that I would not run again and there are things that I did yesterday that I would not call again,” he said. “There are just so many little things that I learned a lesson, obviously in a hard way, but that is what you have to do. You have to say ‘all right’ because we are going to see this team again obviously, and we are going to play a game this Sunday and we have to be ready to roll.”

Stefanski and his staff are mostly new to the AFC North, and film study doesn’t capture the intensity and physical nature of the Ravens and Steelers. But Stefanski is smart and will get another chance to match wits later in the year.

First is a rematch Sunday with the Bengals, who lost to the Browns 35-30 in Week 2 but should have a better feel for Stefanski’s scheme. The pressure will be on the Browns to prove their resilience yet again. That starts with moving past the loss to the Steelers.

“If we want to be a great team where we have the capability to be, we have to take what we can from these losses and learn from it, and the next shot we get, put it into effect and take it to them,” Conklin said.

Steelers 38, Browns 7: Baker Mayfield beat up, doesn’t finish game as 4-game win streak ends, skid at Heinz Field reaches 17
Odell Beckham Jr. attributes display of frustration to getting clobbered by Steelers and being taken out of game before it was over