Notes: Kevin Stefanski says Baker Mayfield not as sore as he was a week ago, expected to practice more this week, start vs. Bengals 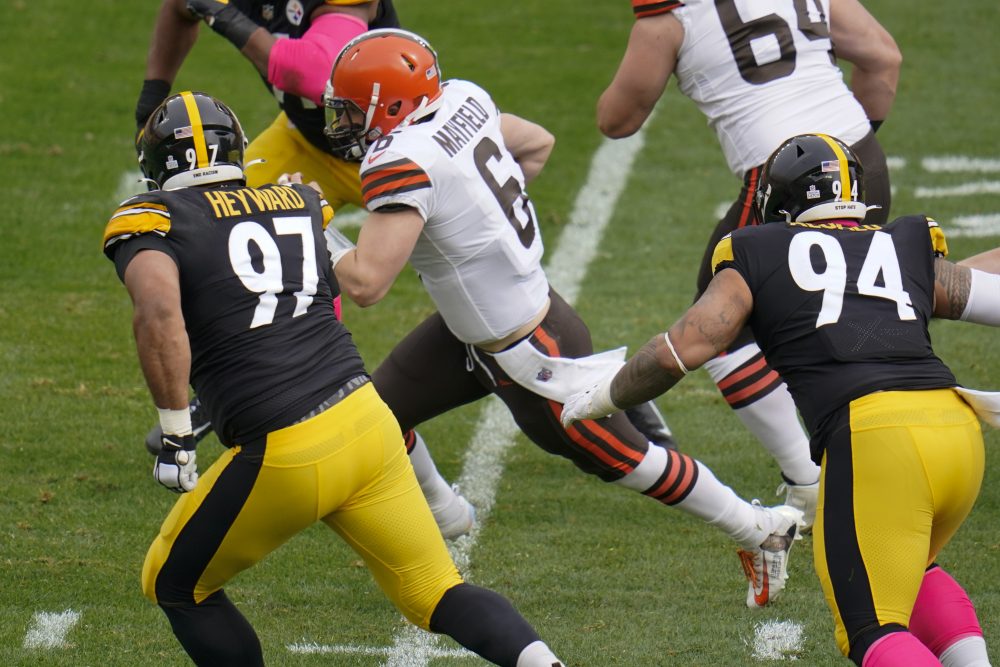 Despite the physical punishment Baker Mayfield took Sunday in the 38-7 loss to the Steelers, coach Kevin Stefanski said he should be able to practice more this week and start Sunday in Cincinnati.

“Yeah, I would expect that,” Stefanski said Monday. “Baker is sore but he’s nowhere near as sore how he was last Monday. So that’s a positive.”

Mayfield’s ribs were injured in the fourth quarter Oct. 11 against the Colts on a couple of big hits. He didn’t throw Wednesday in practice, was limited Thursday and listed as questionable on the injury report.

Mayfield was sacked four times by the Steelers and knocked down five others, according to CBS’ statistics, and Stefanski pulled him from the game in the third quarter to save him. Stefanski declined to say if Mayfield had follow-up X-rays after the initial results came back negative.

“I would not get into the specifics of any player when it comes to those types of things,” he said. “I am confident in our medical staff and confident in Baker that he is going to progress each one of these days and then get better.”

Mayfield went 10-for-18 for 119 yards, a touchdown, two interceptions and a 54.9 passer rating against the Steelers, and Stefanski was asked if he second-guessed playing Mayfield given his ribs and their unrelenting defense.

“I think it’s a fair question, but he was cleared,” Stefanski said. “He was obviously sore throughout the week but got better. It was incumbent on myself and how we performed to keep him clean, and we didn’t do that. But he answered the bell last week just in terms of how he went through and rehabbed and fought his butt off to get out there with his teammates on Sunday.”

The public criticism of Mayfield increased after Sunday’s performance, but Stefanski repeatedly made everything about the team’s dismal day.

“There is improvement to be had across the board, but I have a hard time singling one guy out in a game like yesterday,” he said.

Right tackle Jack Conklin was confident Mayfield will shake off the clunker.

“Just the competitor in him,” he said. “You are not seeing a dark cloud going over him and him getting down on himself. I think you see him staying positive and wanting to learn, wanting to be better and become better.”

Receiver Odell Beckham Jr. was the center of attention even after being pulled from the blowout. He slammed his helmet to the ground and took off his cleats.

Stefanski said he appreciates Beckham caring that much about winning.

“Yeah, he wants to win very badly. His teammates know that,” Stefanski said. “He is a passionate football player. He gets frustrated in a game like that, just like the rest of us do.

“That is what I chalk it up to, and he is going to work really hard this week to make sure it does not happen again.”

Conklin liked Beckham gathering the team for a sideline pep talk earlier in the game.

The Browns missed right guard Wyatt Teller, who was inactive with a calf strain, as the line struggled to block the Steelers in the pass and run games. Chris Hubbard filled in against his former team, making his first career start at the position in just his second game there.

“Chris stepped in and did great last game,” Conklin said. “I trust him there. It definitely hurts not having Wyatt. Obviously he is playing great and it is a bummer not to have him there, but I trust Chris.”

Stefanski labeled Teller’s injury “week to week” after he was hurt against the Colts.

“Wyatt is pushing hard to make it this week, but with those type of injuries, you just really do not know,” Stefanski said.

He said the linemen had done a good job this season of winning their one-on-one battles but struggled in that area against the Steelers.

“We have to play better,” Conklin said. “That is a good front. We knew that. We had to come out and set the tone, and we never really got in a rhythm, and that is on us.”

Cornerback Denzel Ward guessed wrong. He thought Steelers receiver James Washington would stick with a short route, but Washington ran an out and up and blew past Ward for a 28-yard touchdown in the second quarter.

“It was a good play call,” Ward said. “I was playing aggressive, and they ran a double move. Just have to have the short memory and play the next play.

“Other than that, I do not feel like that defined how I played personally in that game. They called a good play and did a good job on the pump fake. Just have to get my eyes back to the receiver and not the backfield.”

The Browns won the coin toss and deferred, which Stefanski said he’ll do the majority of the time.

“I feel like you have more information later in the game towards halftime on what the team is doing,” he said, adding it also sets up the offense for the double dip of scoring before and after halftime.

** Stefanski said running back Kareem Hunt is OK after taking a hit to his shoulder.

** Safety Ronnie Harrison is working his way through concussion protocol, Stefanski said. He was hurt against the Colts.

** Stefanski mentioned kickoff return as an area that needs to be improved. Rookie Donovan Peoples-Jones averaged 22.3 yards on four returns, and Dontrell Hilliard replaced him for one of 13 yards.