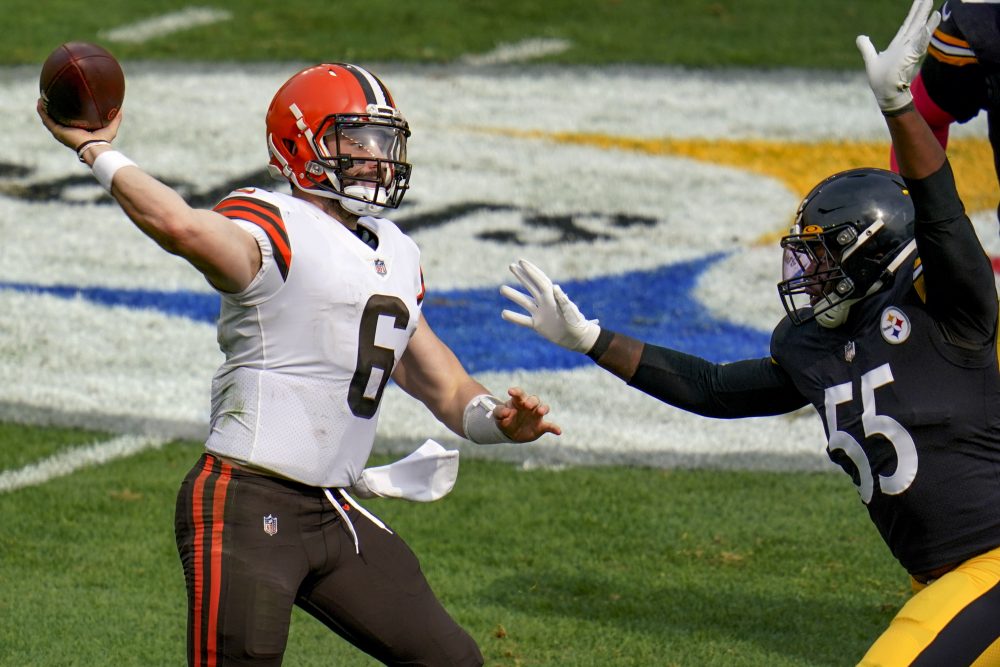 Baker Mayfield made it easy for his critics to find their voices. He threw a pick-six on his first pass, threw another interception that led to a Steelers touchdown and was pulled in the third quarter to protect his injured ribs from further punishment as the Browns lost 38-7 Sunday to stop a four-game winning streak.

The noise grew louder over the next couple of days, with national analysts Ryan Clark, Rex Ryan, Colin Cowherd and Stephen A. Smith among the chorus pronouncing Mayfield a failure six games into his third season and with a 4-2 record.

“I don’t give a damn what they say,” Mayfield said Wednesday. “It’s within this building. We know we can be better, I know I can be better, and that’s how it’s going to be handled.

“The outside noise doesn’t matter. They get paid to talk, we get paid to work, so that’s how it’s going to be handled.”

The response is a reversal from a year ago, when he fired back at Ryan and the public spat ran throughout the season. Mayfield plans to keep his head down and his mouth mostly shut, part of the changes in Mayfield in Year 3, the first under coach Kevin Stefanski.

Receiver Odell Beckham Jr. knew Mayfield would be under attack by the national media and offered his support after the game. Beckham believes Mayfield has the right attitude as the Browns get set to play the Bengals on Sunday in Cincinnati.

“I think he is going to come out fired up,” Beckham said. “I think he’s always been inspired by the negativity, the doubt and the haters.

“We’ll see on Sunday how he responds. It’s not about what happens to you, it’s about how you respond. I’m sure he’s ready to go and he’s fired up. The worst part about it is you have to wait till Sunday.”

The critics didn’t pull any punches.

Clark: He can’t take the Browns to the Promised Land.

Ryan: He’s not the guy that everybody said he was when he came out.

Mayfield, the No. 1 pick in 2018, admitted to doubting himself during his regression in 2019 but said his confidence didn’t take a hit vs. the Steelers.

“No. I think it’s all very correctable things that will be corrected,” he said. “So, no, I feel the same way.”

Stefanski and Mayfield’s teammates aren’t concerned about the terrible outing or the criticism affecting him.

“Baker is fine. He is a pro. He is a good football player,” center JC Tretter said. “Not worried at all about him and how he responds.

“For us, it is not really blocking it out, it is more of an eye roll. It is part of the beast, part of the game. All that matters is what goes on within these walls.”

Mayfield was limited in practice Wednesday with the sore right side but did more than a week ago, including throwing.

“Luckily didn’t have any setbacks, so should be able to do a lot more in practice, get more reps,” he said.

Although the Browns’ losses were by a combined 76-13 to their rivals, they are 4-2 and positioned for a run to the playoffs. They will look to bounce back Sunday and beat the Bengals, whom they topped 35-30 in Week 2.

“I’d say the feeling throughout the building after that loss, 4-2’s never felt so much like 0-6 before,” Mayfield said. “But that’s because we have very high expectations for ourselves. So we’re eager to get back to work, get out there and fix the problems that we know are within our own control.”

Stefanski preaches not riding the wave and treating each week independently and the same, so Mayfield’s comparison was a little off-brand.

“I do not know specifically to what Baker was referring. Maybe he felt the mood on the Zoom call maybe?” Stefanski said. “I can promise you in here, we are ready to go and we are ready to put the work in to try and go 1-0.

“I think it was (Hall of Fame coach Bill) Parcells who said, ‘You are what your record says you are.’”

Beckham didn’t want to trivialize the loss to the Steelers because he puts great value on every game and called that an important one. But he appreciates the solid start to the season.

“We are 4-2. We are in a good place,” he said. “I think it is just about finding confidence within the people within this building because I do not think people expected us to be 4-2 anyways.”

Mayfield said he needs to have a short memory and quickly get past what happened in Pittsburgh. He’s focused on finding completions to make life easier on him and the offense and lifting the mood inside team headquarters.

“We have to realize that it only counts for one loss, and the most the important game is the next one,” he said. “We have to get back to work and handle it with that mentality.”

He’s looking for everyone to hold each other accountable.

“It’s the next-game mentality,” he said. “We know we can be better, I know I can be better and they see that.

“There’s no ‘the world is crashing right now’ mentality.”

Odell Beckham Jr. attributes display of frustration to getting clobbered by Steelers and being taken out of game before it was over
Jarvis Landry reveals he’s playing with a broken rib, remains ready to make plays when given the chance