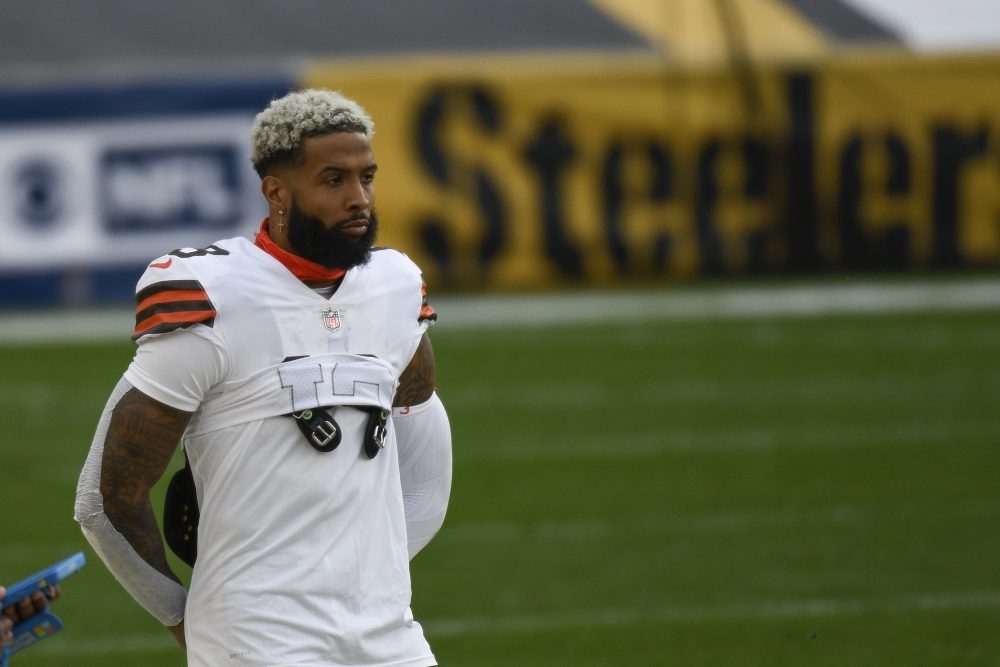 Facing an early and imposing deficit, Odell Beckham Jr. implored his teammates to keep battling and close the gap. When the game was out of hand, he wanted to stay on the field and fight to the finish in the 38-7 loss to the Steelers on Sunday.

Beckham didn’t get his way on either count and reacted by slamming his helmet to the ground. He attributed the sideline outburst to the Browns being clobbered in a key AFC North matchup and the coaches taking him out with eight minutes left.

“I’m p—–. And at this point I really don’t care to keep trying to make myself look like a good guy to the world and all that sh–,” he said Wednesday on a Zoom call. “Because I am who I am. I got pulled out of the game, the coach said this is the best decision. It’s eight minutes left and for me I’d rather take my a– whooping like a man. I’d rather take my win the same way. I want to be out there till the last whistle competing.”

Beckham had an explanation for taking off his cleats. The CBS cameras caught him watching from the sideline in socks before he put on tennis shoes.

“As you know Dallas game in the first quarter I got tackled, stubbed my toe into the ground, kinda have this lingering turf toe issue,” he said. “So if I’m not going to play I’m not going to stand there with cleats on the sideline and my toe be jammed in there.

Odell Beckham Jr. says he doesn’t think COVID-19 “can get to me” because of “mutual respect”

Beckham often feels he gets singled out for criticism and seemed to reference Patriots quarterback Tom Brady, who is often celebrated for having a strong desire to win when he yells at coaches or teammates.

“I am kind of over trying to play the right thing because I love him to death, but there are people who have plenty of rings and are considered the GOAT, and they do things on the sideline and other people do things on the sideline and they get away with it, and that is classified as passionate because they may have something behind their legacy or whatever it is,” Beckham said. “To me, we love this so much and it means that much. There is no way around it. I do not care if I have zero rings, 12 rings or 20 rings, I love this game of football and I am not going to keep dulling myself for the world to feel like I am mature or whatever word you would like to throw around. I am always going to be me.

“Tired of losing. Tired of losing to good teams. Just ultimately want to win. I will just keep pushing forward and it is not going to bother me anymore.”

Although it’s something he admittedly doesn’t like to do, Beckham gave a couple of sideline speeches earlier in the game in an attempt to keep the focus on the Steelers. He said he’s noticed for years a tendency in the NFL for players to admit defeat too quickly with the thought there’s another game next week.

“It’s just something that’s been on my heart, it’s been on my mind,” he said. “I hate that more than anything. I feel like you should win every single game, you should give it everything you have until the last whistle.

“So I’m trying to change that mentality, that mindset. It’s a NFL mentality thing. That game’s important, not just to keep the winning train rolling but it’s a divisional game, it counts for a little more. Just trying to find a way to get us all going.”

Despite the magnitude of the game — the Browns were 4-1 and the Steelers 4-0 — Beckham didn’t like the Browns’ energy.

“I kind of was saying it all game long in Pittsburgh, I am like, ‘This is one of those games you have to bring your own energy. This is dead. It is dead,’” he said. “There is no other way to explain it. The interception in the first quarter was like ‘Thank you. I needed it.’ I needed to be ticked off. The energy just was not there. Whether it was flat or whatever it was, I just feel like we did not come out as fired up as they did, and it showed throughout the rest of the game.”

Beckham caught two passes for 25 yards. He’s on pace for career lows in a full season with 23 catches and 319 yards through six games. He does have three receiving touchdowns and one rushing.

“There are always things that we can do better,” coach Kevin Stefanski said of involving Beckham. “We can design better plays and just the rhythm of how we call them. I have said it before, it is no mystery he is a big part of our success. Our success winning ballgames, he is going to be a big part of that.

As Browns look to move past blowout loss to Steelers, Denzel Ward still believes they can compete with AFC North’s best
Baker Mayfield doesn’t “give a damn” what critics say but acknowledges “4-2’s never felt so much like 0-6” after ugly loss to Steelers