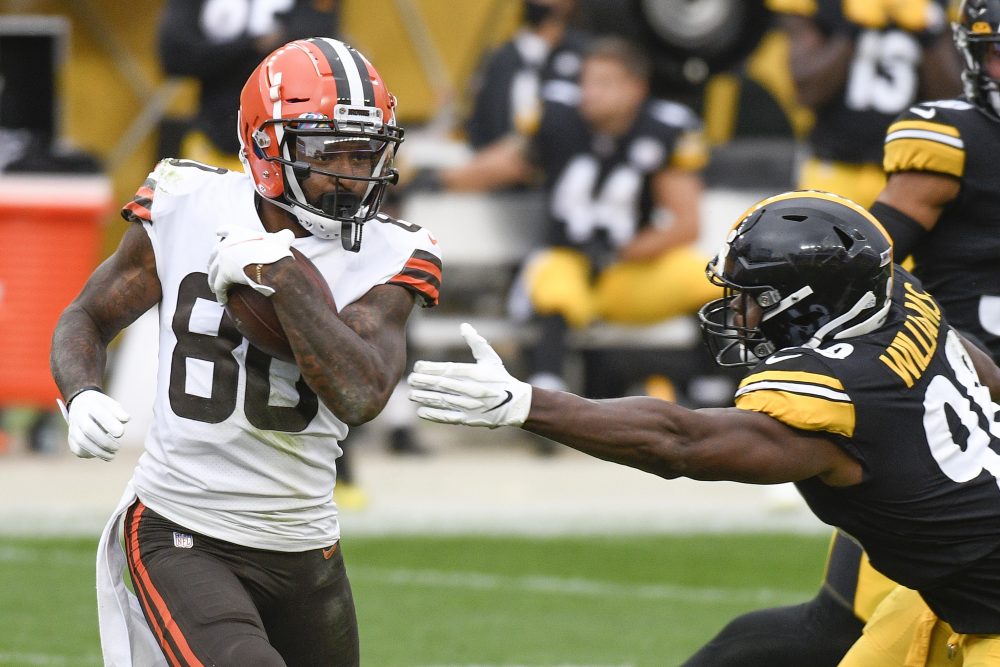 BEREA — Jarvis Landry grew up in Louisiana. He started his NFL career in Miami. He fits in Cleveland.

The five-time Pro Bowl receiver revealed Thursday he suffered a broken rib on a big hit in the first quarter Oct. 11 against the Colts. He returned in that victory and played again Sunday in the loss to the Steelers. He’s played 102 straight games to open his career and is determined to make it 103 Sunday in Cincinnati against the Bengals.

“It is Cleveland, right? It is blue-collar. Whatever it takes,” Landry said. “We have that mindset and that mentality here. These guys come and show that each and every day.

“Just kinda out here in practice doing whatever I can and giving it my all on Sundays.”

Landry said he’d never broken a rib and was asked what it’s like playing with one.

“It hurts, it hurts, it hurts,” he said, also acknowledging the difficulty breathing and sleeping. “At times it’s bearable, but we’ve done a good job of making sure that I’m getting protection here throughout the week and then making sure I cover it up and do whatever I need to play on Sundays.”

Landry, 27, didn’t have anything to prove about his toughness. He played through a hip injury last year that required offseason surgery and made it back in time for the opener.

Coach Kevin Stefanski made him the captain for the Colts game because he knew how physical the matchup would be.

“That is the player that Jarvis is. That is why he is a leader of this football team,” Stefanski said. “I know he is a wide receiver, but he is a physical player that everybody feels when he is on the field. He gives great example to really all the guys.”

“Really, there is no one tougher on the team,” coordinator Alex Van Pelt said. “He is made out of burlap and he is tough as nails. Definitely fortunate to have him on the team and appreciate that toughness he brings to the whole team.”

Landry is famous for the “contagious” speech he gave in a receivers meeting that ended up on “Hard Knocks.” He inspires teammates through words and actions.

“He may make a catch, make the wrong move with his body or maybe fall to the ground, and you can see him reaching for his ribs,” linebacker Mack Wilson said. “We just know he is hurting. We just know that Jarvis is a warrior.

“It is crazy when you have guys on the team who are willing to do whatever it takes to help the team. That basically just lets you know nothing will stop him from anything. When times get tough, he always finds a way to push himself through. I feel like that is spreading all around the team because that is something that does not go unnoticed.”

“It sets a fire under everybody else’s butt in that locker room,” Van Pelt said.

Landry leads the Browns with 24 catches and is tied with Odell Beckham Jr. with 319 receiving yards. Landry is still looking for his first touchdown catch but threw a touchdown to Beckham against the Cowboys.

The opportunities for Beckham and Landry have been less frequent than they’d like.

“For us as receivers, we can only make the plays when we are given the opportunities,” Landry said. “There are a lot of guys in the receiving room who are ready to make plays, myself included, and we just need some more opportunities.”

Quarterback Baker Mayfield has told Beckham and Landry to be patient while the offense is driven by the run game and he tries to get more comfortable in Stefanski’s system. Landry said they’re doing a good job staying patient.

“We are. It is tough, but it is part of it,” he said. “It is a team game. As receivers, a lot of our success is solely based on the 9-10 other guys. Everybody, we have hard jobs. Everybody is coming out here and working as hard as they can, and everybody is trying to win. There is not one person that is in this building or that takes the field that is not trying to win or when a play call comes in that Coach Stefanski does not think that it is the right call. For us, we just have to continue to trust and believe in each other.”

Despite the loss to the Steelers, inconsistency of Mayfield and the lack of a breakout passing game, Van Pelt remains confident improvement will come as the season progresses.

“Our mentality here is the sky is not falling,” he said. “We have played some really good football and done some good things in the pass game and in the run game up to this point. Those guys give everything they have. They want to be out there for their teammates and win.

And Landry will play even if he’s not feeling fine.

“Jarvis is a tough dude,” said left guard Joel Bitonio, who hasn’t missed a snap in 54 games. “He is prideful. He wants to play, and he wants to be out there for his teammates.”

Baker Mayfield doesn’t “give a damn” what critics say but acknowledges “4-2’s never felt so much like 0-6” after ugly loss to Steelers
A critical takeaway from loss to Steelers: Browns defense can’t survive without forcing turnovers