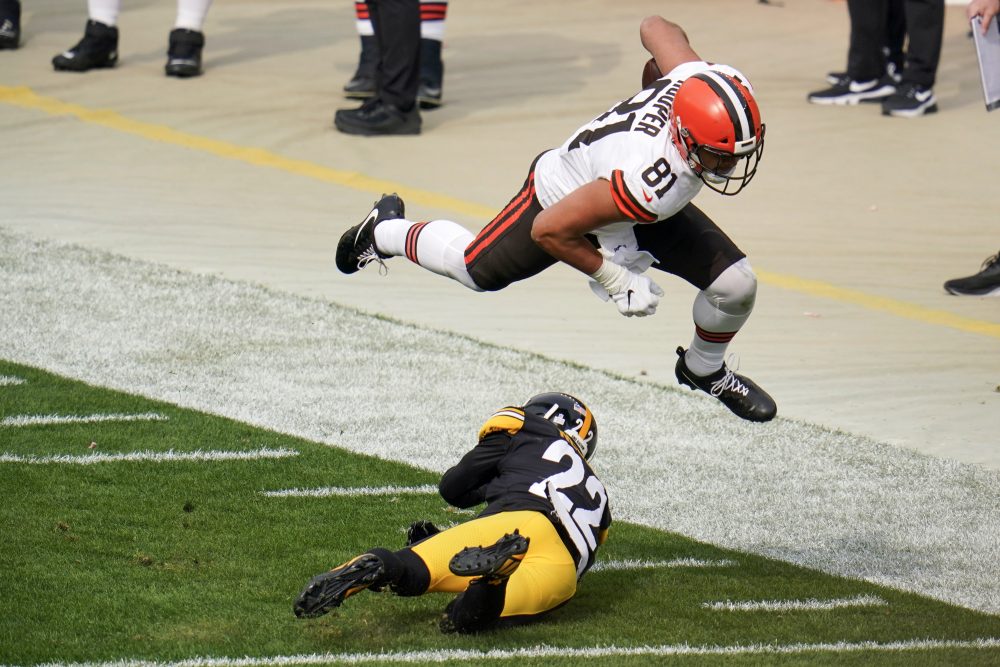 BEREA — Tight end Austin Hooper needed an unexpected appendectomy Friday, and the Browns will be without him Sunday against the Bengals in Cincinnati.

Hooper wasn’t on the injury report Wednesday or Thursday but developed appendicitis. Coach Kevin Stefanski said the team caught it early, and the surgery was performed by Dr. Raymond Onders of University Hospitals.

Hooper signed a four-year, $42 million deal in March to join the Browns as a free agent. He has 22 catches for 205 yards and a touchdown in six games, including five catches in each of the last three games.

“Any success we’ve had this year he’s been heavily involved,” Stefanski said, including the run game in which Hooper is a strong blocker. “It does not always show up in the statistics as catches, but he has been very involved in our successes this season.

“Obviously we will miss him, but we will hold down the fort until he gets back.”

Rookie Harrison Bryant, David Njoku and Stephen Carlson will get pushed up the depth chart in Hooper’s absence. Bryant, a fourth-round pick, has eight catches for 70 yards and a touchdown. Njoku has five for 63 and a TD in three games.

Stefanski said he didn’t know how long Hooper would be out but he wouldn’t automatically head to injured reserve, which would mandate he miss three games.

“He is in good spirits,” Stefanski said. “We will update you as we get more information.”

The Browns host the Raiders next week before the bye.

Quarterback Baker Mayfield (chest) was a full participant in practice Thursday and Friday and will play Sunday.

“I thought he looked good,” Stefanski said. “I have a ton of confidence in him. He has had a great week. He’s ready to go.”

Mayfield, who’s dealing with sore ribs, reached for his chest after a few throws in practice the last two days, but Stefanski said the injury doesn’t affect his throwing.

“No. He is like a lot of guys — you are healthy but does not mean you are 100 percent,” Stefanski said. “You are still feeling it a little bit and it can be uncomfortable, but that is not unlike a lot of guys that are battling through injuries on our roster. I give them credit for what they are doing.

“Well, surprisingly, he did very well in the Colts game,” veteran line coach Bill Callahan said. “And against Pittsburgh, he had some struggles here and there, but for the most part he competed hard and he is learning some of the intricacies of the position, which is hard to do when you move a tackle inside, it takes a little time.

“I commend Chris for making this move on such short notice and doing the things he has done and having some success that he has had. To make that transition, it is awfully challenging, awfully tough, because things happen so much quicker and so much faster inside.”

** Safety Karl Joseph (hamstring) was listed as questionable. He missed the last two games, was limited Wednesday and Thursday and practiced fully Friday.

“He looked better and better each day,” Stefanski said. “We are going to be cautious.”

Ronnie Harrison will likely start in place of Joseph at strong safety. Harrison missed last week with a concussion but was a full participant this week.

Last week defensive end Myles Garrett declared the matchup with the Steelers a “defining game” for both teams. Despite the 38-7 loss, Garrett remains positive.

“It is always a defining game going against a couple of the best in the division, seeing the Ravens and Steelers,” he said. “They both have gotten one over on us. But we get to see them again and we get to see them at our house. So I feel like just like they got one over on us, we can do the same thing and we can even it up and have a good chance at the end of the year to extend our season.”

Mayfield said Wednesday that the Browns’ 4-2 record felt like 0-6 after the loss to the Steelers, but Garrett assumed a different attitude.

He’s not completely recovered from the significant knee hyperextension suffered Aug. 18. And although he’s played four straight games, the lingering effect of the injury has prevented him from playing every snap like he wants and expected for his second season. He’s played mostly in the base defense, leaving the field in passing situations.

“I miss it a lot. Being able to be on the field and not really come off, I miss it,” Wilson said Thursday. “I feel like me being on the field more would help me make more plays and things like that to put us in situations to win.”

He admits the setback has been tough to process after starting 14 games as a rookie last year.

“I have days where I just kind of reflect on me last year as a player and where I am right now,” he said. “With me getting hurt, I feel like I took a few steps back.”