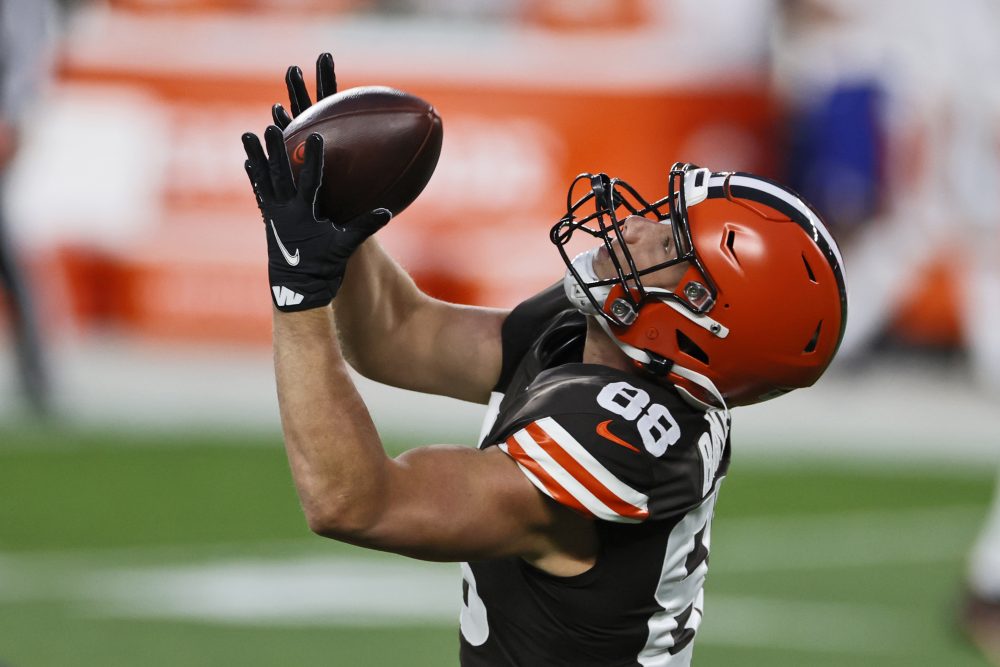 The Browns lost one of their primary weapons when No. 1 tight end Austin Hooper had an appendectomy Friday, but the position should still play a significant role. Coach Kevin Stefanski demanded depth at tight end when he arrived and has it with rookie Harrison Bryant, David Njoku and Stephen Carlson. The throws to the tight end are often the simplest for a quarterback, and Baker Mayfield stressed this week the need to find more easy completions.

Cleveland’s tight ends combined for only three catches for 36 yards in the Week 2 35-30 win over the Bengals, but that should change in the rematch. The Bengals defense is in transition, and last week allowed Colts tight ends Trey Burton and Jack Doyle to combine for seven catches for 87 yards and two touchdowns. The Colts were without their No. 1 tight end in Mo Alie-Cox, so the comparison applies.

The Bengals surrounded rookie quarterback Joe Burrow, the No. 1 pick, with an abundance of talent at the skill positions, easing his transition to the NFL. This is most obvious at receiver, where Tyler Boyd, A.J. Green and rookie Tee Higgins give Burrow three big-time targets that will stress the Browns secondary. Boyd has 37 catches for 416 yards and a touchdown, Higgins 22, 339 and two and Green 22 and 215.

The Bengals spend much of the time in three-receiver sets, even going with four and five wideouts at times, and lead the league with 41 passes a game. Burrow threw 61 times for 316 yards and three TDs in the Week 2 matchup and could come close to that many attempts Sunday with top running back Joe Mixon ruled out with a foot injury. Browns nickelback Kevin Johnson will be counted on in the slot and must join Denzel Ward and Terrance Mitchell on the outside in challenging the receivers, making throws difficult for Burrow and giving the pass rush time to get home.

“They are trying to get the ball to those receivers, and they have a good plan of how to utilize each and every one of their skill sets,” Browns secondary coach Jeff Howard said. “Joe, he spreads the ball around.”

BIG DAY FOR THE BIG GUY

Myles Garrett’s first game-changing play of the season was a strip-sack of Burrow that led to a Browns touchdown. Garrett went on a big-play binge throughout the four-game winning streak that ended last week in Pittsburgh, when he extended his sack streak to five games. He should have plenty of chances to threaten and take down Burrow, especially against an offensive line that’s allowed 24 sacks, but the Bengals will have a plan to slow down Garrett.

“He can change a game in a second,” Bengals coach Zac Taylor said. “He has been doing it his entire career. He is a special player, and you need to make sure that he does not wreck the game. You have to be aware of him at all times.”

Percent of fourth downs (10-for-11) opponents have converted against the Browns. The Bengals went 5-for-5 in Week 2.

The pressure is on to bounce back from the embarrassing loss to the Steelers. Bengals rookie quarterback Joe Burrow won’t make it easy, but Baker Mayfield and the Browns get the much needed win. Browns 30, Bengals 24.

Analysis: Despite plenty of cause for concern, it’s too early for Browns to panic about, give up on Baker Mayfield
Commentary: Browns win a wild and crazy one in Cincinnati, and fans should get used to the madness