O-line looks to rebound from disappointing performance, help get Baker Mayfield, offense back on track vs. Bengals 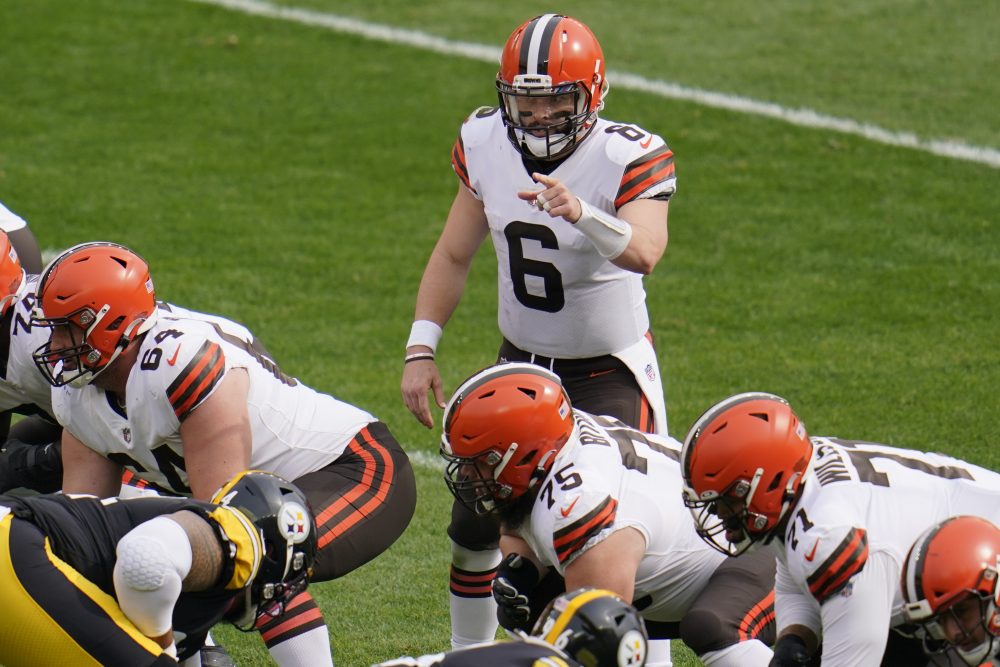 Offensive linemen are used to living in obscurity. They toil away as faceless, nameless blobs, happy to do the dirty work that allows the stars to shine.

The Browns’ front five started to get a taste of glory as they racked up the rushing yards during the franchise’s first four-game winning streak in 11 years. From the coaching staff to quarterback Baker Mayfield to the running backs and receivers, everyone was effusive in their praise of the men up front.

Then they made the bus trip to Pittsburgh.

The foundation of the surging offense buckled against the Steelers’ powerful, persistent, penetrating front. Mayfield and his sore ribs were sacked four times, and the run game held to 75 yards on 22 attempts. The line wasn’t the only guilty party but was at the center of the problems and didn’t perform nearly as well as it had the previous four games.

“You have to play one of your best games offensively across the board to be in the game with them, and we definitely did not do that,” coordinator Alex Van Pelt said. “I have a lot of confidence in the guys up front. There is no question those guys are going to play at a high level for a long time this year.”

He expects that to begin again Sunday in Cincinnati against the Bengals (1-4-1). The line is too talented, too prideful and too well-coached to play poorly for an extended period.

“Sometimes when you get kicked in the butt, it kind of brings some awareness back to you, a little self-awareness of where we are at and refocuses everybody, ties them all down and locks them all in,” Van Pelt said.

The reasons for the line’s letdown vs. the Steelers were abundant.

Pittsburgh’s 3-4 scheme with hard-charging outside linebackers challenges all lines. Right guard Wyatt Teller (calf) was missed, as replacement Chris Hubbard struggled against defensive tackle Cameron Heyward. But Hubbard wasn’t alone in losing one-on-one battles, as outside linebackers T.J. Watt and Bud Dupree too many times got the best of right tackle Jack Conklin and left tackle Jedrick Wills. Coach Kevin Stefanski blamed himself for the game plan and play calls. Mayfield didn’t see the field well and held the ball too long. And the early deficit played right into the Steelers’ hands.

The offense’s problems highlighted the importance of the line, which new general manager Andrew Berry fortified in the offseason with the additions of Wills and Conklin. As Mayfield continues to search for the stellar form he had as a rookie, he needs to be supported by the run game and feel protected in the pass game. The line is responsible for both.

“We have to play better,” Conklin said. “We had to come out and set the tone, and we never really got in a rhythm, and that is on us. When he can’t get it out to our playmakers and let them do what they can do, it immediately falls on us.

“We still believe in ourselves, and we are going to take what we can from this and learn and get better.”

The Bengals are going through a transition on defense due to injuries and longtime linemen Geno Atkins and Carlos Dunlap losing playing time and effectiveness. And while Cincinnati doesn’t have the scheme or personnel of the Steelers, it can try to follow the blueprint of keeping the undersized Mayfield in the pocket, where he doesn’t have the same comfort or success as when he’s in space and on the move.

Finding an answer against defenses that try to do this will be a key as the Browns (4-2) try to reach the playoffs for the first time since 2002.

Veteran line coach Bill Callahan said solutions are the three-step passing game and moving the pocket. Mayfield also mentioned getting rid of the ball quickly, as well as exploiting the defense’s attention to the edges.

“If they have somebody really worried about the quarterback keeping the ball, then that means they have one less guy in the run game or if they are stretching out the field horizontally,” he said. “There are different things that we can do, and we can do better. We will react and adapt.”

Mayfield continues to deal with a sore chest and right side but practiced fully Thursday and Friday. He’s yet to be the driving force in a victory this year and has pedestrian stats — 60.6 completion percentage (29th in the NFL), 1,095 yards (26th), 10 touchdowns (tied for 13th), six interceptions (tied for fourth most) and an 84.3 rating (26th).

“I have no doubt in my mind that he will bounce back,” cornerback Denzel Ward said of Mayfield. “Baker, he is a competitor. He is going to work hard. He is going to do what he has to do to make sure he is ready.”

Stefanski’s plan likely won’t include Mayfield going pass-for-pass with Bengals rookie Joe Burrow, who threw 61 times in Week 2 and leads the league with 41 attempts a game. Even without Nick Chubb, who’s out with a knee injury, Stefanski wants to lean on the run game, which totaled 215 yards in Week 2. The last two weeks have dropped the rushing average from 204.5 yards a game to 169.5, but the Browns still top the NFL.

Kareem Hunt led the league in rushing in 2017 with the Chiefs and believes he’s an elite back. Despite nagging injuries — groin, thigh, ribs — he’s looking to bust out for the first time since taking over for Chubb in Week 4 against the Cowboys.

“The O-line wants to get him going,” left guard Joel Bitonio said. “Nick is a great running back and we miss him obviously, but Kareem is a dude, too. I think as an O-line we are more stressed about that than he is.”

“I would love it, but I am here for the wins and losses,” Hunt said. “My biggest thing is I want to win.”