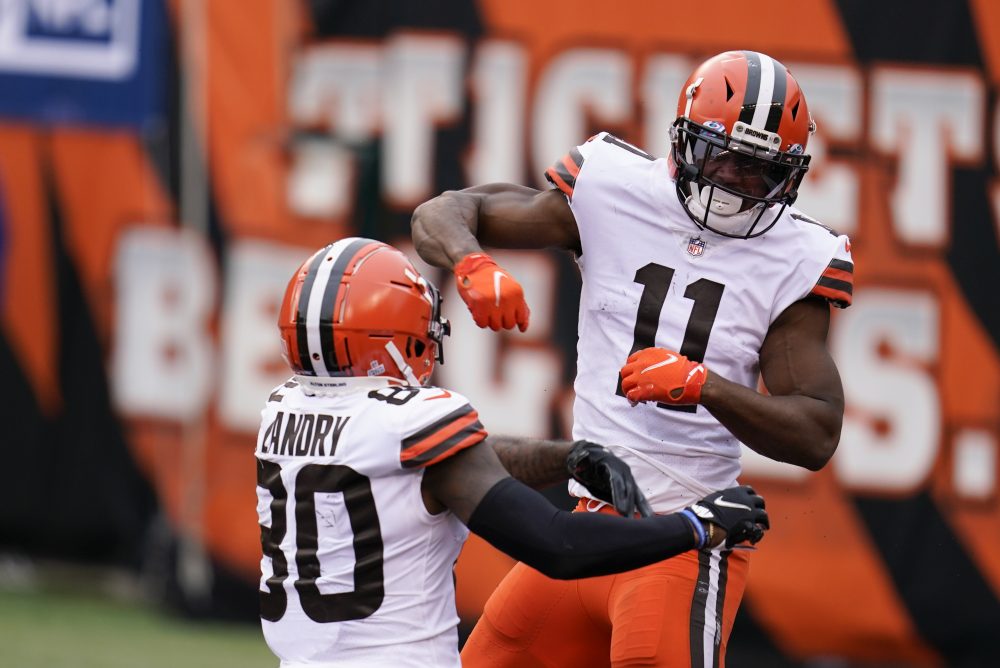 Good. Because apparently this is the way it’s going to be from week to week.

Expect the unexpected, anticipate the unanticipated and, depending on the week, enjoy the unenjoyable.

“Yeesh,” say Browns fans everywhere. “Who knew that winning could be so exhausting?”

Browns 37, Bengals 34. That, evidently, is the final from Sunday, unless Joe Burrow launched a second Hail Mary that hasn’t splashed down yet. Burrow’s first Hail Mary hung in the air longer than Odell Beckham Jr. hung in the game.

His OBJ-ness suffered a knee injury on Baker Mayfield’s first pass of the game, which resulted in an interception, which certainly was not the start that was needed by the quarterback, whose hair-raising start a week ago in Pittsburgh gave the word “debacle” a bad name.

It was so bad that the “Gone Gong” gang banged it most of last week, by way of suggesting that it’s time to initiate another new quarterback search because this Baker can’t cook.

So, of course, Mayfield responds Sunday with his greatest game as a pro, a five-TD masterpiece in which he completed all but one of his last 23 passes, for 297 yards.

Ho-kay, so maybe his career with the Browns isn’t over at age 25.

The cherry on top came with the Browns losing 34-31 with 66 seconds left in the game. Mayfield winked at the Bengals, said, “Not in your house” and marched the Browns 75 yards in 55 seconds for a winning touchdown, which came on a vintage Mayfield bull’s-eye to Donovan Peoples-Jones, whose most interesting feature prior to Sunday was the hyphen in his name.

On that drive, Mayfield completed all four of his passes — not including a spike to stop the clock — two to Peoples-Jones and two to Rashard Higgins, who has gone from Freddie Kitchens’ doghouse to Kevin Stefanski’s penthouse.

So we all saw all of that coming, right?

“They know that when we need them, they have to be ready. They proved that today,” Stefanski said of Higgins and Peoples-Jones, who combined for nine receptions for 166 yards.

More than anything, though, this was a statement game by Mayfield, and he needed one, following the mine cave-in a week ago in Pittsburgh, when he looked overmatched, under-healthy and unable to fend for himself, much less lead his team to victory.

Like him or not, you have to admire the pluck, touch and leadership he showed Sunday in his critical rebound game — even if it came against one of the worst teams in the NFL. To be a franchise quarterback, you have to be able to do what Mayfield did, when it needs doing.

“You are going to have to go win the game and a two-minute drive. That is what happens in this NFL. That is what good teams do,” Stefanski said. “To see the way (Mayfield) responded. … Early, we were not doing anything — the plays were not very good and we just could not get a completion — and then he rips off 20 straight (completions). I could not be more impressed with how he played.”

Mayfield isn’t in the clear yet. The jury’s still out, but it can see the door from here. The Browns’ nine remaining regular-season games and, if they’re good enough, playoff game(s?) will be a referendum on a player who so far in his career has been a better lightning rod than a quarterback.

In the meantime, if you think you know how the rest of this whack-job season is going to play out for the league’s most soap opera-ish team, good for you.

As usual, there were arrows pointing in both directions Sunday. The Browns proved they could win a game without much help from their two injured elite receivers, Beckham and the physically limited Jarvis Landry.

The Browns also proved they could win a game despite giving up 31 first downs and 422 yards passing to the Bengals, whose offense did pretty much whatever it wanted to do to the Browns defense, which forced exactly zero punts.

Maybe the only team the Browns could have beaten Sunday was the one they were playing. Or maybe this was a gut-check game that the Browns needed and passed: on the road, against a division foe, following an embarrassing, uncompetitive pancaking by the Steelers.

Read the tea leaves at your own risk. At this point, would anything surprise you?

They’re 5-2, and in leading a game-winning, end-of-game touchdown drive, the quarterback put the finishing touches on a 22-for-23 passing palooza.

“That is mentally where I’m used to being, that I can make any throw,” said the cocky-again quarterback. “But there are a lot of things that we did in the second half to build on, critical plays that were made and guys stepping up.”

That it came against the one-win Bengals might be an asterisk for some. But it beats the previous week’s asterisk kicking.