Mailbag: Will David Njoku have big role today, then be traded before deadline? How are Nick Chubb, Kareem Hunt different? Would more shotgun help Baker Mayfield? 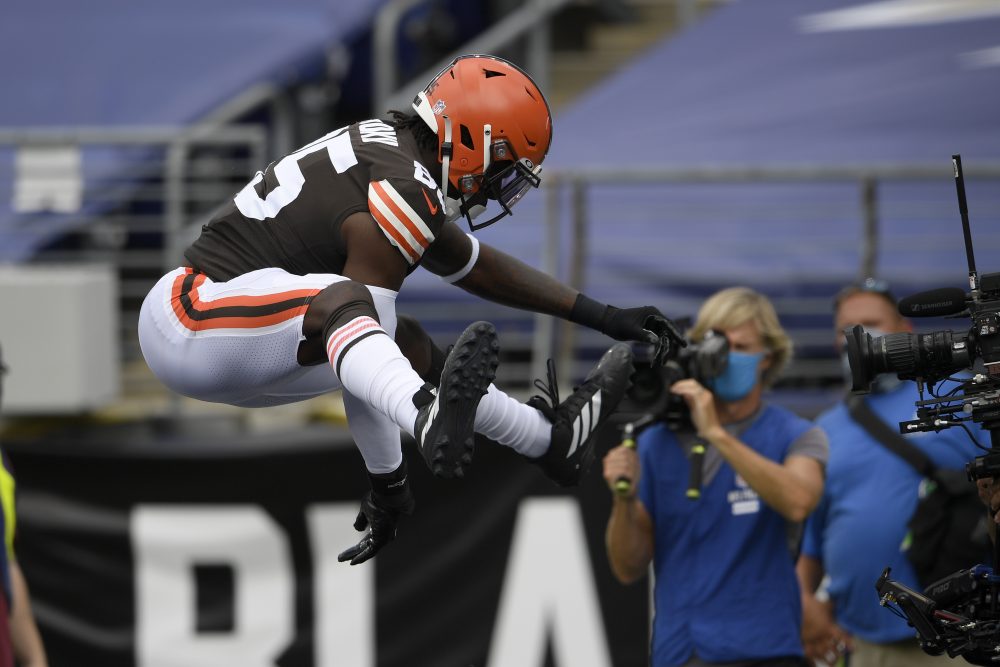 Q: With tight end Austin Hooper out now, will David Njoku be a big part of the game plan, especially if they want to showcase him for a possible trade before Nov. 3? Do you think Njoku will be traded?

A: Njoku will be a large part of the game plan today because the Browns use a ton of two-tight end sets — I don’t think it has anything to do with the trade deadline — and Hooper is out after an appendectomy Friday. And I expect Njoku and rookie Harrison Bryant to have big days against the Bengals, who allowed two touchdowns to the Colts tight ends last week.

As for the trade deadline, I don’t think Njoku will be dealt. The Browns value his role as a second/third tight end and would only part with him for the right offer. Unless a playoff contender suffers a major tight end injury before the deadline, I can’t imagine a team offering a quality return for Njoku.

Q:
Do you see any notable difference in the skill sets of Nick Chubb and Kareem Hunt?

A: A timely question given the drop in production of the run game over the last two weeks in the absence of Chubb. I believe Chubb is a top-three running back in the league, while Hunt fits in the 8-12 range.

And there’s no doubt there’s a difference in style. Chubb is a bruiser who excels inside the tackles, fights for every yard and falls forward despite contact. What makes him special is that when he gets past the initial traffic he has breakaway speed. Hunt is smoother and shiftier, making would-be tacklers miss early in runs. His quick feet are noticeable in every drill on the practice field. Hunt doesn’t have the strength or speed of Chubb but he does have better hands.

O-line looks to rebound from disappointing performance, help get Baker Mayfield, offense back on track vs. Bengals

Q: Could you see the Browns using the shotgun offense more to help Baker Mayfield gain confidence, at least until Chubb returns?

A: I go back and forth on this. I know Mayfield’s background is in the shotgun and he feels more comfortable starting in space. But the play-action game is more effective from under center, and I believe he needs to learn to thrive when asked to be a traditional drop-back passer.

According to sharpfootballstats.com, Browns quarterbacks have been under center 62 percent of the time this season, which is second to the Rams in the NFL. But 83 percent of Cleveland’s passes come out of the shotgun. So it’s not like he’s being forced to throw much when starting under center.

Q: Our coach has shown the ability to keep his emotions in check, and this has seemed to help him with the press and play calling. However from your earlier research on him and what you have heard and seen on and off the field, does he have the ability to forcefully confront problem players and situations like Mike Tomlin does?

A: An interesting question. And I think the answer is yes.

From everyone I’ve talked to who knows Kevin Stefanski well, one of his strengths is relationships. And that includes ones that can be contentious. While this is hard to prove after only six games, I think there’s evidence he can handle difficult conversations. Baker Mayfield’s buttoned-up approach in the media where he doesn’t attack the Colin Cowherds and Rex Ryans of the world is at least in part because Stefanski wanted Mayfield to clean up some of his off-field behavior. I also think Stefanski has established a team-first approach that permeated the locker room, including the receivers room. Discontented tight end David Njoku is another example. He would prefer to be starting somewhere else but fell in line after an initial trade demand and hasn’t gone rogue.

Q: The Steelers defense plays fast and when they give up a chunk play, teammates walking back to the defensive huddle come across as calmly discussing sight corrections. It’s impressive, 11 men acting as 1. Too often this season, Browns defenders glare at each other in confusion after allowing a big gain. Is it a fair critique that our defenders seem to be 11 individuals and often unsure of themselves? If so, what can be done this season to tighten the “alignment” on defense?

A: I don’t disagree with your observations, but that doesn’t mean there’s a lack of harmony. I believe it boils down to learning a new system and inconsistent lineups due to a series of injuries across the back seven of the defense.

Coordinator Joe Woods hasn’t had the linebackers, safeties or cornerbacks he envisioned when training camp started, and we’re through more than a third of the season. Free safety Andrew Sendejo is playing every snap after rookie Grant Delpit was lost for the season and has allowed several big plays. Cornerback Terrance Mitchell is playing for Greedy Williams, who’s on injured reserve with a shoulder injury. Tavierre Thomas was forced to play nickelback early in the year as Kevin Johnson recovered from a lacerated liver. Linebacker Mack Wilson still isn’t ready to play in nickel packages as he comes back from a knee injury, forcing B.J. Goodson to play a role he’d never really held before.

These may sound like excuses, but they’re legitimate explanations for everyone not being on the same page all the time. That doesn’t mean it’s OK, and the miscommunications and mental errors must be cleaned up for the defense to make the strides necessary not to drag down the offense. The first fix is for each player to know his role on every play and trust himself to handle it. I think that would reduce some of the gambling that’s gotten the secondary in trouble.

Q: Do Baltimore and Pittsburgh both play 3-4 defenses? If so, are they harder to zone block against?

A: The Ravens and Steelers both use 3-4 schemes, although they’re not identical. The Steelers’ is a “true” 3-4, while I feel like the Ravens’ is more of a hybrid. But, yes, the wide zone scheme is more difficult to run against the 3-4, your point is well taken and something Stefanski will have to figure out as the season progresses.

Veteran line coach Bill Callahan and the linemen discussed during the week how to have success with the run game in the rematches and against other 3-4 schemes. It starts with going with more gap scheme runs and staying within the tackles. Mayfield mentioned exploiting the interior of a defense if it’s so worried about the wide runs and him keeping the ball on bootlegs. I trust the smart coaching staff to make the necessary adjustments, but no matter what they do, the sledding will always be tougher against the styles of the Steelers and Ravens.

Mailbag: Is there enough depth to withstand injuries? Where is Olivier Vernon? Any contract extensions coming?
Mailbag: Who’s the best of the recent first-round picks? Will a pass rusher be added? Where’s the safety help?