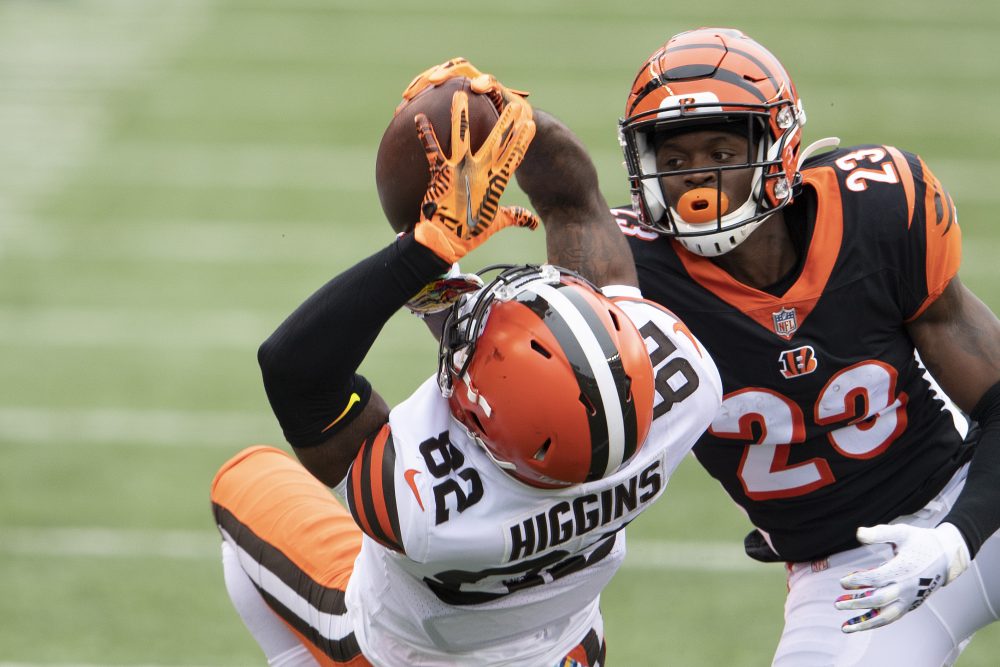 The guy who caught the winner, rookie receiver Donovan Peoples-Jones, didn’t have an NFL catch until the fourth quarter, and hadn’t caught a pass from Baker Mayfield until the final drive.

The guy who set up the winner, receiver Rashard Higgins, was a healthy inactive twice this season.

The guy who caught the first two touchdowns, rookie tight end Harrison Bryant, was a fourth-round pick in April and entered with eight catches.

With receiver Odell Beckham Jr. leaving in the first quarter with a knee injury and tight end Austin Hooper out after an appendectomy Friday, the Browns needed people down the depth chart to make key plays.

They got it Sunday in a 37-34 win over the Bengals at Paul Brown Stadium in Cincinnati.

Peoples-Jones, a sixth-round pick out of Michigan, was a healthy inactive the first three games before debuting as a kick returner after JoJo Natson was lost for the season with a torn anterior cruciate ligament. His first catch came in the fourth quarter Sunday on a 19-yard pass from receiver Jarvis Landry. No. 2 was a 13-yarder from Mayfield to start the winning drive, and No. 3 was a 24-yarder to end it.

“Just to know that feeling and really know the magnitude of that play where he scored the touchdown is incredible,” Bryant said. “It was a great play.”

Higgins debuted in 2016 but collected his first 100-yard game Sunday. He had a team-high six catches for a game-high 110 yards, including 8- and 30-yarders before Peoples-Jones’ touchdown, renewing his three-year connection with Mayfield.

“He knows me, and I know him,” Higgins said. “There is nothing to say about that. It is wine poured in a cup — smooth.”

“Coming into the game, we knew that there would be opportunities,” Bryant said. “We just wanted to take full advantage of those opportunities. We did that today.”

He had two sacks of rookie Joe Burrow, giving him a league-leading nine. One was a strip-sack, his second of Burrow and fourth overall this season, which leads the NFL. He added a tackle for loss.

“Just making a play,” Garrett said of the strip-sack. “It is not like I see him being bad protecting the ball. I am just going for the ball, no matter who it is. He just happened to put it up there for me.”

Garrett set a Browns record with a sack in six straight games, the league’s longest active streak. His 39.5 sacks are tied for fourth in NFL history in a player’s first 44 games.

** Cornerback Denzel Ward was the other bright spot on a defense that allowed 468 yards and didn’t force a punt.

He had three passes defensed, including two in the end zone. He leads the team with 11 this year, and his 20 vs. the AFC North are the most since he was drafted No. 4 in 2018.

Center JC Tretter was down on the turf, grabbing his right knee on the same play in which Beckham was hurt. Somehow Tretter returned for the next possession and extended his streak of consecutive snaps. He hasn’t missed one since joining the Browns in 2017.

“I went to go check on him, and he was in a lot of pain,” said left guard Joel Bitonio, who hasn’t missed a snap since 2017. “I thought it was done for, but he finds a way to make it back onto the field. That is just what he does. He is tough and he is prideful. He cares about his teammates, and he thinks being on the field is the best thing for his team. It is going to take a lot to get that guy off the field.

“It is impressive stuff, and it inspires me. I was ready to roll with him once he came back out.”

Tretter had surgery on the right knee in August.

The Browns had just taken their first lead, 24-20 with 13:13 left. A takeaway by the defense would’ve given them a chance to take control with a two-score lead.

Cornerback Terrance Mitchell had the perfect opportunity, as Burrow and receiver A.J. Green had a miscommunication and the ball was thrown right to Mitchell.

He dropped it, couldn’t believe it and the Bengals went on to score the go-ahead touchdown.

“After that play, I went over to him and I got on him about body language because it is important,” said linebacker B.J. Goodson, who had an interception on the game’s first possession. “We did not get the ball on that play, and it is all about the next play. It was an opportunity for us for sure, but we still have to compete and defend.”

Mayfield’s 21 straight completions set a franchise record, passing the 16 by Bernie Kosar in 1989 and Kelly Holcomb in 2003.

** The Browns lead the league with 14 takeaways after two Sunday.

** Safety Ronnie Harrison had a season-high nine tackles, his second career fumble recovery and his first sack of the season.

** The Browns didn’t report any injuries besides Beckham’s.

** Strong safety Karl Joseph was active after missing two games with a hamstring injury. Harrison started, but Joseph played a little off the bench.