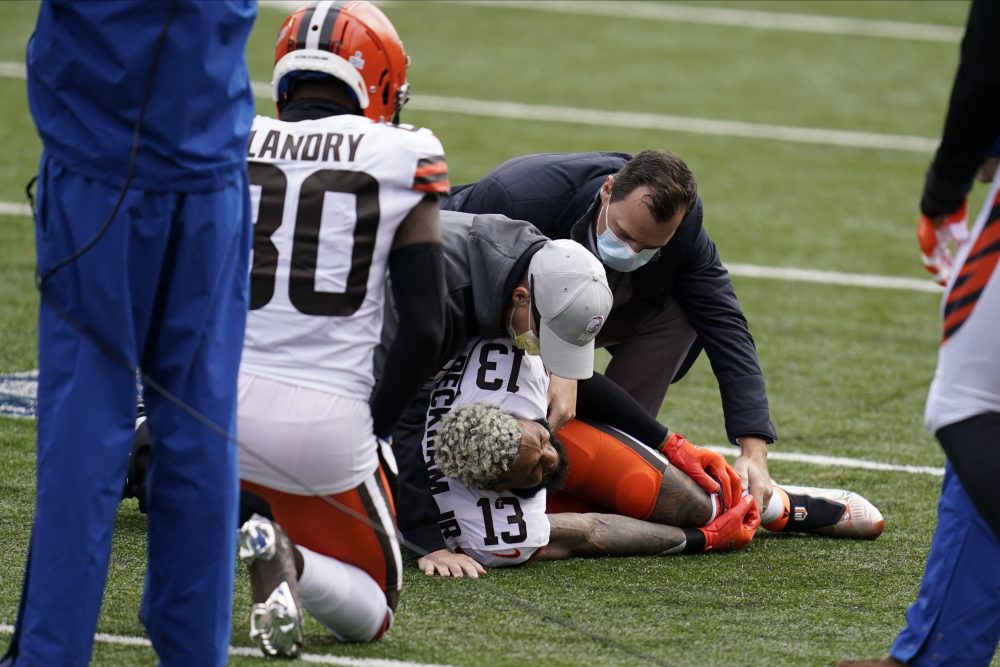 He couldn’t stop thinking about his errant throw on the early interception in which receiver Odell Beckham Jr. suffered what’s feared to be a serious knee injury.

“The ball to Odell, we knew we were going to have a one-on-one and wanted to give him a chance,” Mayfield said Sunday after a 37-34 win over the Bengals in Cincinnati. “I didn’t do that and left it short and inside. I am probably going to beat myself up about that one for a long time.

“He is a guy who fights for this team, and in doing that, he got hurt. Prayers and hopes for the best.”

Beckham’s left leg buckled as he chased Bengals cornerback Darius Phillips after he intercepted Mayfield’s first pass on a deep throw down the right sideline. Beckham grabbed the leg, was taken directly to the locker room and didn’t return.

The Browns rallied to win and may have to play the rest of the season without their No. 1 wideout.

Beckham was scheduled to have an MRI on Monday, which will reveal the full extent of the injury. But the team believed it could be serious, according to a league source, and his teammates sounded dejected after talking to Beckham.

“It just sucks. No words,” Mayfield said. “To go into halftime and see him, I told him I loved him, and he said, ‘Go be great.’

Mayfield was great, throwing four touchdown passes in the second half and leading the Browns to a 5-2 record.

Beckham wasn’t part of the thrilling comeback or finish.

“Disappointed for him. He wanted to be out there very badly,” coach Kevin Stefanski said.

Beckham, who’ll turn 28 on Nov. 5, has 23 catches for 319 yards and three touchdowns. He also has a rushing touchdown.

Jarvis Landry would move into the No. 1 receiver role in Beckham’s absence. Landry caught five passes for 48 yards and threw a 19-yard completion Sunday as he continued to play through a broken rib sustained Oct. 11 against the Colts.

Mayfield pointed out Landry also played through grief. Landry and Beckham met in high school, played at LSU together and were reunited in Cleveland last year after Beckham was acquired in a trade. Landry kneeled on the turf and looked on as the medical staff attended to Beckham.

“So Jarvis really didn’t have the stats but he had so many crucial plays and that is his best friend and brother who went down,” Mayfield said. “So to me to be able to have success after your best friend goes down like that and not knowing the circumstances, hats off to Jarvis. He’s a true leader of this team and he’ll continue to be.”

Mayfield got hot in the second half, completing a franchise-record 21 straight passes. Mayfield didn’t have the pressure of getting Beckham the ball, but left guard Joel Bitonio said the Browns would miss Beckham if he’s out an extended period.

“That is a key part of our offense,” Bitonio said. “He takes the tops off defenses. He empties boxes for us. He makes big plays.

“Anytime you miss a player like that, it is tough. He is kind of an emotional guy, too, so he brings some energy in that sense and so you lose that.”

Beckham and Landry were noticeably quiet on social media in the hours after the game.

“As far as in the game, it is a part of the sport,” linebacker B.J. Goodson said. “I have dealt with my own injuries in the past, and everyone else deals with it. This is a physical game.

“As far as afterwards, he was one of the first guys on my mind so I went back and talked to him and just told him that I was with him and I am praying for him. He is not on this journey alone.”

Mayfield dedicated the win to Beckham.