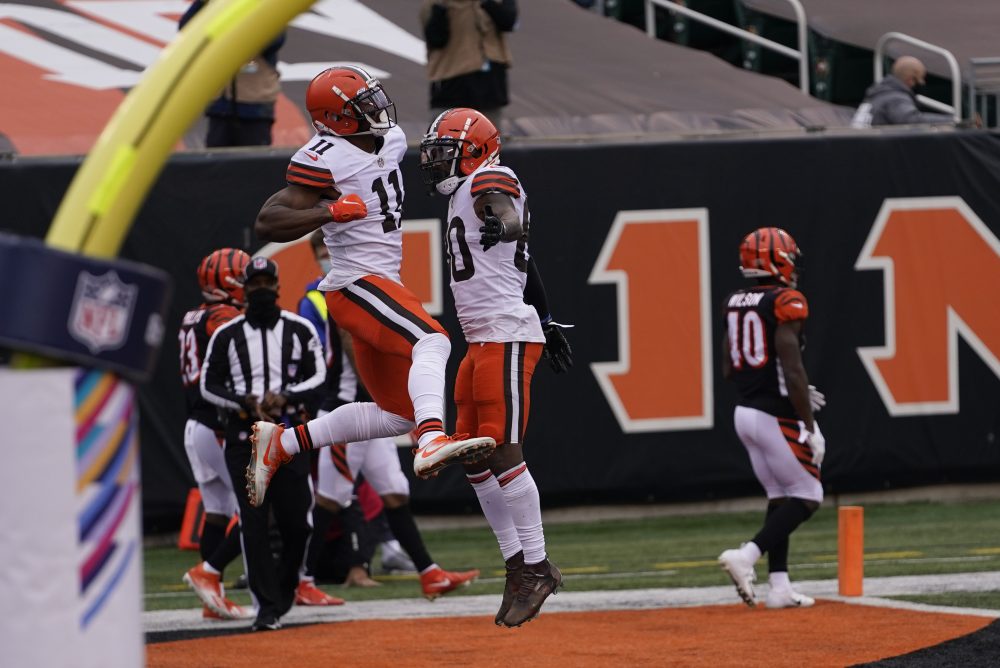 Mr. Reliable is a rookie receiver.

Donovan Peoples-Jones didn’t have a catch in the NFL before the fourth quarter Sunday but had already earned the trust of the coaching staff with his preparation and intelligence. The faith was rewarded with three catches for 56 yards in the final 15 minutes, including the winning 24-yard touchdown with 11 seconds left in the 37-34 victory over the Bengals in Cincinnati.

“Really proud of how he played,” coach Kevin Stefanski said Monday. “It was not the first game action for him but getting his hands on three balls and making plays was great to see.

“He is Mr. Reliable. He can line up anywhere, very intelligent player. And then see him go make a play with the ball in the air was outstanding. There are going to be opportunities for him moving forward just like that.”


Peoples-Jones, a sixth-round pick out of the University of Michigan, has been the No. 1 kick returner since Week 4 following JoJo Natson’s season-ending knee injury. He was immediately thrust into the role of No. 3 receiver that week against the Cowboys when KhaDarel Hodge pulled his hamstring before the game, so he was ready when Odell Beckham Jr. went down Sunday on the second offensive play.

“It feels good because that is something that I pride myself on being reliable, being there, being ready and taking on multiple positions,” he said. “I feel like this game was a big game for us. For me to have a couple catches and it really meaning something, it just felt so good.”

Peoples-Jones will be among the receivers asked to step up with Beckham out for the season with a torn anterior cruciate ligament.

“I am going to keep coming in and showing everything that I have,” he said. “Every tool and asset I have that they can utilize, I just want to show it.”

Peoples-Jones said he didn’t know the winning pass would come his way but started to think it might as he got off the line and ran his go route down the right sideline. Baker Mayfield’s pass got over cornerback Darius Phillips and landed in his arms.

“Seeing the ball actually in the air between me and the defender and seeing the flight of the ball, I did not think that the defender would see it in time and I did not think that I would need to go up and get it because I could feel that it was going to land that way,” Peoples-Jones said. “I felt like I could kind of back shoulder it, and I did. I really did not think to get two feet inbounds. I just tried to do what I have been doing my whole life, and I am so glad that I was able to get two feet inbounds.”

“He is my favorite player, my favorite basketball player of all time,” Peoples-Jones said. “I think he is the best of all time. That felt good that he was watching and supporting.”

The Throw.
The Catch.@bakermayfield to @dpeoplesjones FOR THE WIN.

The Bengals didn’t punt Sunday, racking up 468 yards. The only stops by the Browns defense were two takeaways, which raised their league-leading total to 14.

“Those are some things that we are going to talk about and find ways to get off the field,” Stefanski said. “I also want to give our defense credit for taking the ball away. They are doing that better than anybody in the league and that is part of who we are.

“All the things from yesterday are correctable. I do believe we have the right people to fix it. I trust that we will get some of those issues corrected.”

The Browns had four sacks, two by end Myles Garrett, but didn’t get consistent pressure on rookie quarterback Joe Burrow, who completed 35 of 47 passes for 406 yards and three touchdowns.

“That is something that we are talking about,” Stefanski said. “You mentioned Myles, he continues to make big plays and we are counting on him. And then we just need to have a rush plan. Whether we are rushing four or more we have to be able to apply (pressure) and affect the QB.”

Cornerback Denzel Ward broke up two passes in the end zone, tipped a pass that linebacker B.J. Goodson intercepted in the end zone and dropped receiver Tyler Boyd for a 2-yard loss on a bubble screen.

“There were some good plays. I am just trying to do whatever I can to help this team win,” said Ward, who leads the team with 11 passes defensed. “I feel I have been playing pretty well all season, so I do not think it was just last game. But I do feel like I had a pretty good game. Definitely plan to build on top of that.”

Stefanski expects to get Hodge back this week after three games on injured reserve with a strained hamstring, and said there’s a chance right guard Wyatt Teller (calf) could return after missing two games.

“It’s hard to say today,” Stefanski said. “I think throughout Wednesday, Thursday we will have a better feel for where he is. But I am not ruling him out.”

** Stefanski also didn’t rule out a quick return for tight end Austin Hooper, who had an appendectomy Friday. The Browns have a bye after the visit from the Raiders on Sunday, so Hooper might be given the extra time.

“The truth is we don’t know,” Stefanski said. “He is improving, feeling better. But that will be something that becomes more apparent later in the week.”

** As expected, running back Nick Chubb isn’t ready to return from IR as he rehabs the sprained medial collateral ligament in his right knee suffered Oct. 4 vs. the Cowboys.

“We will have that bye week and really reassess,” Stefanski said. “I know this, he is, as you can imagine, attacking this thing. He is working very, very hard. And I know he is on schedule and I would not be shocked if he was ahead of schedule.”

Stefanski took the blame for the questionable strategy on Cincinnati’s Hail Mary attempt to end the game. The Browns stationed three players near the line, but they didn’t really rush, letting the Bengals receivers set up in the end zone and Burrow load up unimpeded.

The throw was deflected into the air before falling to the ground in the end zone.

“That was my fault,” Stefanski said of no pass rush. “Calling that defense was thinking that the quarterback could not reach the end zone — I thought they would be more lateraling the ball. But where that return went out and how far it went out, we should have been rushing the passer. That is on me.”

Gio Bernard returned the kickoff from the 18-yard line to the Cincinnati 42, allowing Burrow to throw the ball all the way to the end zone.

Strong safety Karl Joseph was active but didn’t start, playing 12 of the 75 defensive snaps. He had missed the last two games with a hamstring injury, and Stefanski said that was the reason for the dip in playing time.

“Still a big part of what we are doing,” Stefanski said. “Going to be counting on him moving forward.”

When Joseph’s completely healthy, the coaches will have to decide how to divide time between him and Ronnie Harrison.

For the first time this year, free safety Andrew Sendejo didn’t play every snap. He didn’t practice Wednesday with a shin injury and played 63 of 75, with Sheldrick Redwine taking some of his time.

** Running back D’Ernest Johnson played only two snaps, as Kareem Hunt was on the field for 47 of the 52 offensive plays. Fullback Andy Janovich got nine snaps, including a couple as the third-down back.

** Linebacker Sione Takitaki played 12 snaps in the base defense.

** Undrafted rookie tackle Alex Taylor was signed to the practice squad and defensive end Jalen Jenks released from it. Taylor spent training camp with the Browns.