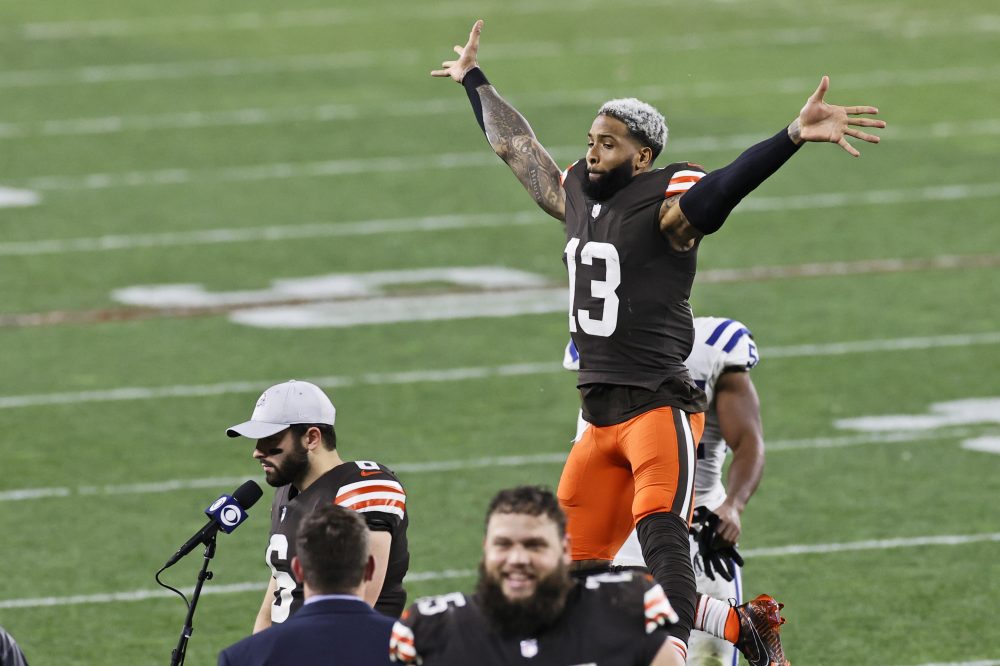 As the Browns returned to the practice field for the first time since star receiver Odell Beckham Jr. suffered a season-ending torn left anterior cruciate ligament Sunday in the 37-34 win over the Bengals, they prepared for a more difficult journey. While they vowed to pick up the pieces and find a way to keep winning, they didn’t buy the theory Mayfield and the offense will be better off without Beckham.

“One, I think it’s just completely insensitive to a guy who just tore his ACL,” Mayfield said Wednesday before practice. “So I’m not even going to comment on it. You never want to lose guys. That’s where I’m going to leave that one.”

Stefanski said there’s no truth to the notion Mayfield plays better without Beckham, a three-time Pro Bowler who finished the year with 23 catches for 319 yards and three touchdowns. He added a 50-yard rushing touchdown.

“I do reject that,” Stefanski said.

The idea that the Browns, particularly Mayfield, could be better without their No. 1 receiver seems counterintuitive, if not laughable. How could a team improve without one of its best playmakers?

But the theory picked up steam after Beckham was hurt. The numbers bolstered the argument.

Stefanski was asked to explain the difference in the data.

“I am not smart enough to make an argument for that,” he said. “I will just tell you I would much rather have No. 13 on the field if available to us.”

Mayfield and Beckham admittedly struggled to develop great chemistry in their year-plus together, and Mayfield seemed to force the ball toward Beckham at times. In the opening loss to the Ravens, Beckham had three catches for 22 yards on 10 targets.

Mayfield completed 22 of his last 23 passes — the incompletion was a spike to stop the clock — and threw five touchdowns Sunday with Beckham in the locker room. He spread the ball to receivers Jarvis Landry, Rashard Higgins and Donovan Peoples-Jones and tight ends Harrison Bryant and David Njoku.

Stefanski doesn’t believe Mayfield will feel less pressure without the need to get Beckham the ball.

“I really don’t think so,” Stefanski said. “Odell is a great, great player. We are going to miss him. I feel sick still without him in the building.

Although Beckham’s stats weren’t great through six games, he remained the offense’s most explosive player, with the possible exception of running back Nick Chubb. He scored three touchdowns against the Cowboys in Week 4, remains one of the NFL’s most talented players, was the team’s top deep threat, brought infectious energy and changed how teams defended the Browns.

Mayfield is used to seeing two safeties play deep or one roll to Beckham’s side to take away the downfield throws. He knows defenses are going to play the Browns differently but isn’t sure how.

“You have to be able to adjust on the fly,” he said. “We believe we have a great team so that is why we are going to ask these guys to step in.

Stefanski and his staff were charged with coming up with a plan for life without Beckham. They met Monday to create a blueprint, then Tuesday developed the game plan for Sunday vs. the Raiders at FirstEnergy Stadium.

“We have depth at that position and then we have to make sure that we use that depth to highlight the strengths of each one of those guys,” Stefanski said. “Feel good about our tight ends, our running backs. This is a team effort.”

Higgins, Peoples-Jones and KhaDarel Hodge will be asked to take on larger roles at receiver behind Landry. Mayfield said the Browns are “a savvy group” that has gotten used to adapting in the strange year and season of 2020.

“We are going to do whatever it takes to win,” he said.

Mayfield had to be just about perfect to pull out the win over the Bengals. The comeback from his 0-for-5 start, including an interception, and the poise and precision in the winning drive could serve as a springboard.

“You always hope to build off those type of things, but I do not think Baker lacks for confidence,” Stefanski said. “I go back to that is the Baker I have seen in practice. He lets it rip because he trusts his guys.”

Mayfield said his expectation always is to produce, but there was something special about the 21 straight completions.

“You can sense those moments when you are feeling it, you are putting the ball in the right place, you are going through your reads, your field of vision slows down and you are just executing well,” he said. “That is also for everybody else on the field doing their job for us to be able to do that. That is an offense clicking and everybody doing their job.”

Raiders coach Jon Gruden praised how the Browns handled the loss of Beckham against the Bengals.

“He is one of the faces of the NFL, not just the Cleveland Browns,” Gruden said on a conference call. “There are two things you can do. You can fold your tent, you can take it negatively and ‘We are done,’ or you can look within the roster and say, ‘Hey, it is your turn to step up. We are going to need more from you and you and you.’

“I felt that that was the path that they took. The ball distribution, the balance and their ability to hang in there and come from behind and win was really impressive.”