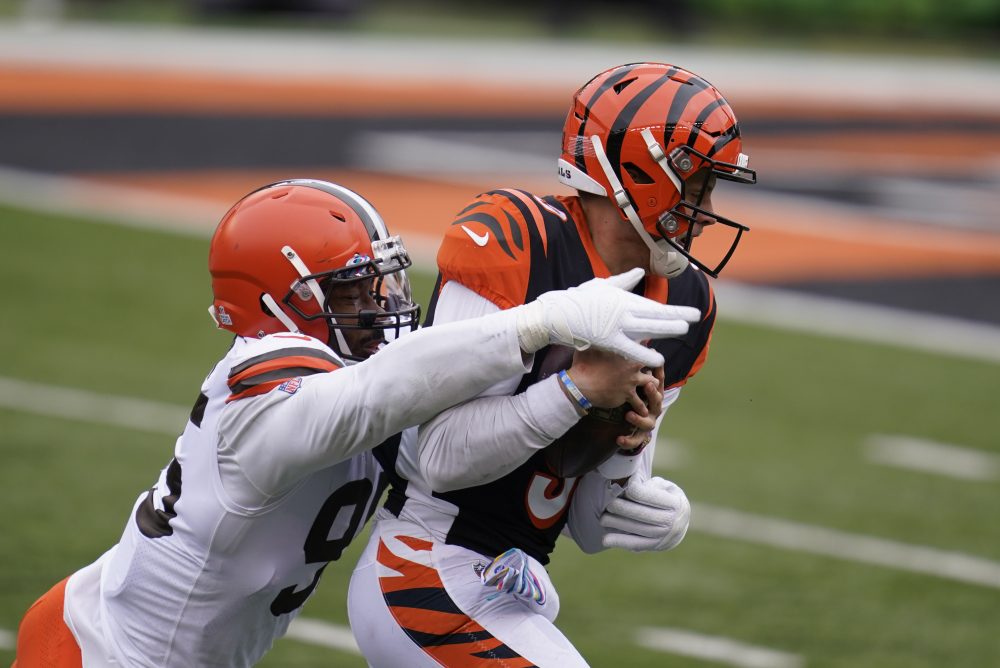 BEREA — Myles Garrett’s pursuit of NFL Defensive Player of the Year was paused Wednesday when he missed practice with an ankle injury. He wasn’t on the field during the early portion open to reporters.

Garrett, Cleveland’s star defensive end, finished the 37-34 win over the Bengals on Sunday. Stefanski expected Garrett to practice later in the week as the Browns (5-2) prepare to host the Las Vegas Raiders (3-3) on Sunday.

“I would expect that,” Stefanski said. “But we’ll gather more information and know some more later in the week.”

Garrett leads the league with nine sacks, one ahead of Rams defensive tackle Aaron Donald, who was DPOY in 2017 and ’18.

Garrett also leads the league with four forced fumbles — all strip-sacks — and has a sack in a franchise-record six straight games.

“We have a thing we call it a ‘factor grade,’ not just the sacks,” Raiders coach Jon Gruden said on a conference call. “Everybody counts sacks. That is like the only thing they count anymore is sacks. This guy forces fumbles. He causes other sacks for other people. He is good against the run. He bats passes down. His arms are up in the air. He forces inaccurate balls.

“He has a factor about him. His presence is felt a lot. He can play left end, right end or they can push him inside, and he is a factor wherever he plays. I wish we had Garrett, and I look forward to seeing him. I always look forward to competing with the best ones.”

Center JC Tretter didn’t practice but expects to play Sunday after suffering a knee injury in the first quarter against the Bengals. He writhed on the ground and grabbed the right knee that was operated on in August but didn’t miss a snap. He hasn’t missed one since joining the Browns in 2017 despite a series of painful injuries.

“It did not feel good,” Tretter said. “Kind of got rolled up, foot got stuck in the ground and twisted around.

“Got off the field, got checked out in the tent and then I tested it and wanted to make sure I was still strong enough to play and then went back out there.”

He said he felt good about the subsequent MRI results.

** Receiver KhaDarel Hodge (hamstring) was designated to return from injured reserve and practiced for the first time since getting hurt Oct. 4 during pregame. Stefanski said he’ll be active Sunday and his role was to be determined.

** Stefanski said it’s a “possibility” running back Nick Chubb could return after the bye next week and play Nov. 15 against the Texans. He’ll miss his fourth straight game Sunday with a sprained medial collateral ligament.

The NFL couldn’t ignore Baker Mayfield’s performance against the Bengals, rewarding him with AFC Offensive Player of the Week.

He went 22-for-28 for 297 yards, five touchdowns, an interception and a 135.6 passer rating. The last touchdown was a 24-yard winner to rookie receiver Donovan Peoples-Jones with 11 seconds left.

Mayfield started 0-for-5 with an interception on his first throw before completing a franchise-record 21 straight passes. The streak was stopped with a spike to kill the clock before the winner.

He threw a touchdown on each of the second-half possessions and became the first Browns player since Dave Mays in 1977 with three fourth-quarter TD passes.

The five touchdown passes tied a Browns record and were the most since Derek Anderson’s handful in 2007.

“I have always thought individual accolades are a representation of the team and especially the offense,” he said. “That one goes for everybody making the plays and what was necessary for us to win.”

Mayfield wasn’t on the injured list Wednesday for the first time since a big hit Oct. 11 against the Colts cracked a rib.

The NFL continues to tweak its protocols for dealing with COVID-19 and trying to prevent its spread among teams. One of the rules is sending home close contacts of an individual who tests positive, which affected the Raiders last week as the five starting linemen missed practices.

“Them specifically did not make us change anything, but we are making slight adjustments to how we meet in an effort to space out and make sure there is no chance of any close contacts in our building,” Stefanski said.

Starting Wednesday, he had the practice squad members attend morning meetings virtually so there were fewer people in the meeting rooms. He extended the morning meetings and canceled the normal afternoon sessions.

“Not huge changes but just trying to be as diligent as we can and limit the exposures, limit the chances of close contacts,” Stefanski said.

Linebacker B.J. Goodson answered a question about cornerback Denzel Ward’s strong start by saying “his play speaks for itself.” Then he was asked about Ward sliding under a blocker Sunday to make a tackle for loss on a bubble screen.

He kept the praise flowing for safety Ronnie Harrison, who recovered a fumble Sunday.

“He is a real player and a ballsy guy, to say the least,” he said. “It is just great having a guy out there with great instincts and able to make plays, as well.”

“Those 12,000 fans are nice and loud,” Stefanski said. “I think the guys love playing in that building and we are excited to get out in front of our fans this week.”

** Peoples-Jones will remain the kick returner, according to Stefanski, despite a possible uptick in playing time on offense following Odell Beckham Jr.’s injury.