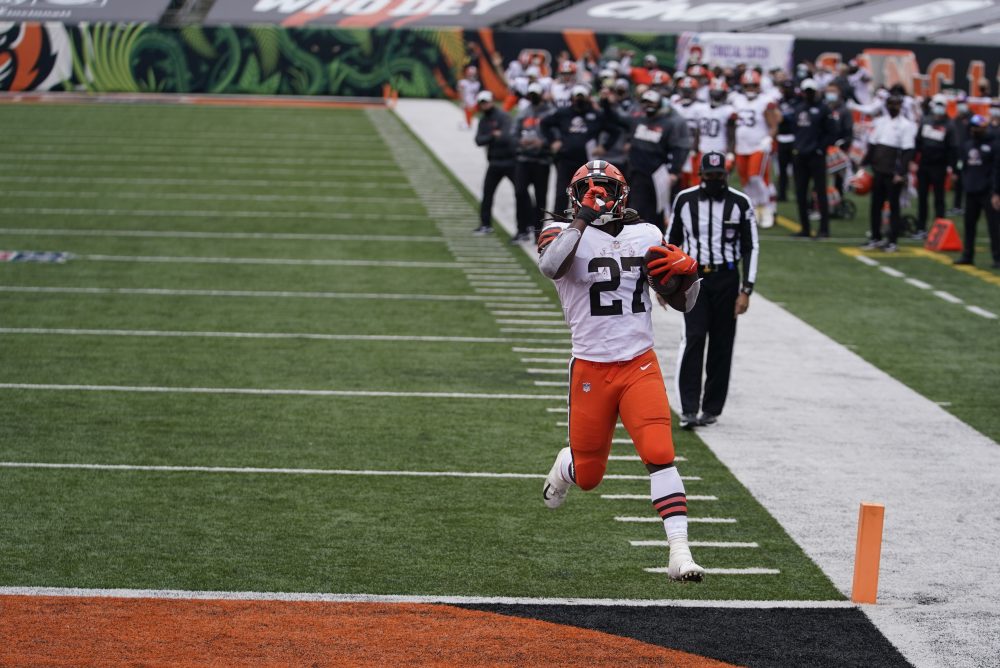 BEREA — Running back Kareem Hunt insists he has a nose for the end zone, and the numbers support him. He shares the league lead with seven touchdowns in seven games — three rushing and four receiving.

The four receiving scores are the most for a running back.

“That is my thing. I just like smelling the end zone,” he said Thursday. “If I get an opportunity to make a play in the end zone or close to the end zone I am definitely going to try to fight my way in there or make the nice catch or whatever it is to get in the end zone.

“And that is just because of the team needs. I would rather have seven points than three any day of the week.”

Hunt has 51 rushes for 188 yards in the three games since replacing the injured Nick Chubb as the No. 1 back. He said defenses have “most definitely” emphasized stopping Cleveland’s rushing attack after its blistering start.

“It makes it tougher, but you just have to grind it out sometimes and do whatever to help the team have positive plays,” he said.

Hunt has played through a series of injuries, including one to his ribs that limited him in practice again Wednesday and Thursday. But he looked strong vs. the Bengals on Sunday, rushing for 76 yards and catching three passes for 26 yards and a touchdown.

“I was really impressed with his ability to break tackles,” coordinator Alex Van Pelt said. “He ran hard in that game. Got us a lot of hard, extra, dirty yards and hopefully he is feeling better each week moving forward.”

The Giants on Thursday followed the Raiders last week in being forced to send home several offensive linemen as close contacts to one who tested positive for COVID-19. The Browns linemen are taking extra precautions to avoid the same predicament so they aren’t left severely short-handed for a game.

“From the start we have been trying to social distance,” left guard Joel Bitonio said. “The O-line meets in the team room, so it is a huge room. But now we have made sure of it. We make sure we are four or five seats away from each other and a couple rows away. When we are at practice we try and stay the 6 feet apart.

“It is a huge thing. If you test positive on a Thursday or Friday and you have to sit out for five days because you are a close contact, you are not going to have a starting O-line at least out there, if you have any close contacts. It is one of the things we are trying to stress.”

The line is traditionally one of the closest groups on a team, so the forced separation is a significant change.

“The toughest part is it does not feel like a real NFL season in the sense where we can go out to eat with each other, we can meet each other’s wives and girlfriends and families,” Bitonio said. “Usually you have an O-line dinner pretty much once a week at someone’s house or at a restaurant or something. You get to just learn what these people do off the field, and it is a little bit harder. Hopefully years down the road we will be able to make up for that.”

The Browns are promoting their “Stay in the Game” initiative through the game Sunday against the Raiders to further raise awareness for equal educational opportunities for all students and school districts, as well as fighting chronic absenteeism. Stefanski and several players wore T-shirts supporting the cause while they talked to reporters on Zoom.

“We know there is a digital divide and that is something that our social justice team has been working on,” Bitonio said. “We are trying to close that digital divide for some of the lower-income areas. We are also making a statement we want kids to stay in school.”

Fans can help address the digital divide by donating gently used desktop computers, laptops, monitors and computer accessories to be refurbished and redistributed by PCs for People.

Cody Parkey made his first 30 kicks with the Browns after replacing Austin Seibert in Week 2. Parkey is 8-for-8 on field goals and made 22 extra points before missing the final one Sunday.

“He has been outstanding for us,” special teams coordinator Mike Priefer said.

** The Raiders converted a fake punt Sunday against the Buccaneers, so Priefer said he’ll have to be more conservative depending on the down-and-distance.

“They are aggressive with that so we will be ready,” he said.

** Priefer said defensive end Myles Garrett and cornerback Denzel Ward are the players whose athleticism jumps out to him constantly.

Center JC Tretter (knee) returned to practice in a limited capacity after sitting out Wednesday. He’s expected to play Sunday.

** Garrett (ankle) didn’t practice for the second straight day but is expected to return Friday. He worked inside while the team practiced on the wet grass.

** Right guard Wyatt Teller (calf) is “doubtful” to play, according to Stefanski. He missed the last two games and hasn’t practiced this week.

** Cornerback M.J. Stewart Jr. (back) was added to the injury report as limited.