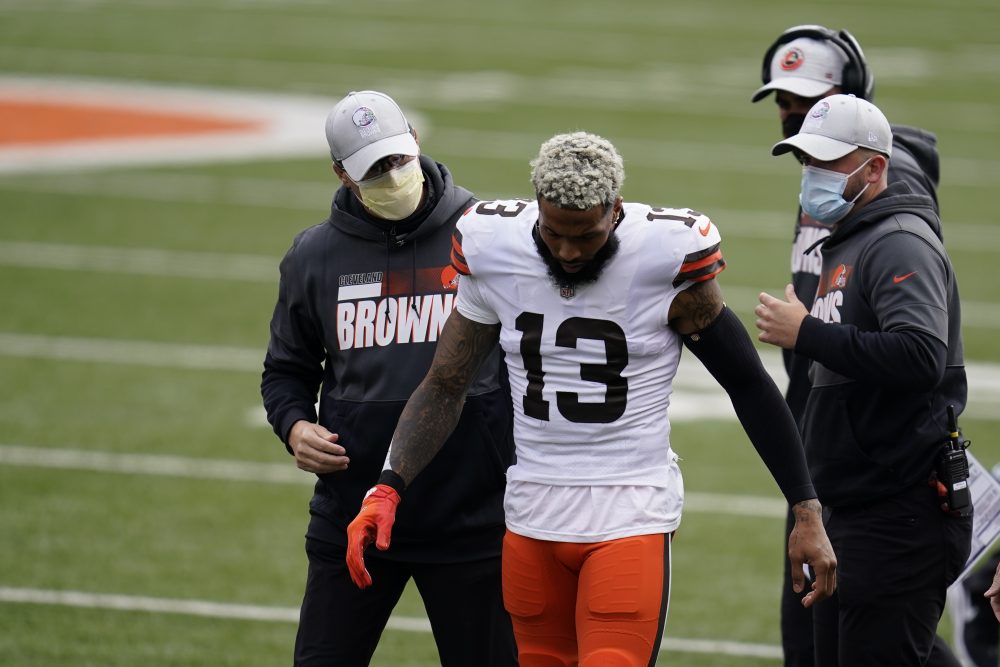 BEREA — General manager Andrew Berry is tired of repeating himself when it comes to receiver Odell Beckham Jr.’s future with the team.

Berry has consistently said he values Beckham and expects to keep him, and reiterated that Wednesday despite Beckham being out for the rest of the season with a torn anterior cruciate ligament. The injury prompted some to wonder whether he’d played his last game for the Browns.

“I feel like this is a question I’ve literally addressed every week since I took the job,” Berry said when asked if he views Beckham as a long-term piece. “So really at this point in time, I really don’t see a difference.”

He was asked for clarification.

“To me, I feel like I’ve answered this question enough,” Berry said. “I can’t control what the outside noise says.”

Beckham was lost for the season in the first quarter Oct. 25 at Cincinnati. Berry said he’s scheduled for surgery early next week on his left knee.

“Odell is one of the best receivers in the NFL,” he said. “He played really good football for us before he was injured. He’s done a fantastic job with his teammates at practice, he’s embraced the organization, he’s under contract for multiple years.

“So our focus with Odell is making sure he recovers from the ACL tear. We want him to be healthy and ready to go next year. But we’re pleased with him.”

Beckham, who turns 28 on Thursday, is under contract through 2023. Nearly $12.8 million of his $13.75 million salary in 2021 is guaranteed for injury in March, and he won’t be recovered from the surgery by then, so the money will be locked in.

The Browns wouldn’t cut him but could try to trade him. Berry has shown no inclination to do that.

Beckham finished with 23 catches for 319 yards and three touchdowns. He added a 50-yard rushing touchdown.

“Odell is one of the best receivers in the league. A loss of a player of that caliber, you do not just realistically fully replace (with one player),” Berry said. “It will take a bit of a committee approach. I like the guys we have in the receiver room. I thought we saw their potential with their ability to step up against Cincinnati two weeks ago.”

Defensive end Myles Garrett didn’t participate Wednesday in the only practice of the bye week, riding the stationary bike after suffering a minor knee injury Sunday in the 16-6 loss to the Raiders. He’s just resting up for the final eight games.

“We anticipate Myles being ready to go with full force through the second half of the year,” Berry said. “He is obviously a big part of what we do defensively. And really, he is an elite playmaker in this league. So we are excited that it really was not anything of major significance and we are looking forward to having him back on the field.”

Garrett shares the league lead with nine sacks and four forced fumbles, but hadn’t gotten much support in the pass rush from the rest of the front four until end Olivier Vernon had two sacks against the Raiders. Vernon and versatile lineman Adrian Clayborn have been slowed by injuries.

“The D-line has had games and weeks where they really have been dominant and they have been a big factor in us being able to win and perform well on that side of the ball,” Berry said. “It has been nice to see OV get healthy, and obviously he made an impact for us this past Sunday. It will be good to see Adrian get back to full speed after the bye.”

Berry made calls before the trade deadline Tuesday but didn’t make a deal.

“We explored a number of different possibilities,” he said. “I would say maybe a couple of things got perhaps within striking distance but either moved away from us or we moved away from it for various reasons.

“We are really happy with the team that we have in place, and we are looking forward to the next eight games.”

Only two minor trades were completed across the league Tuesday. Berry attributed the slow day to more teams in playoff contention with an extra spot in each conference this year and the uncertainty of the 2021 salary cap after a drop in revenues because of the coronavirus pandemic.

“There were just in general fewer sellers this year than past years,” he said. “With the uncertainly of the salary cap entering 2021, it does make certain transactions and certain trades a lot more difficult for teams across the league.”

Tight end Austin Hooper returned to practice less than two weeks after an appendectomy Oct. 23. Coach Kevin Stefanski said Monday that Hooper will play Nov. 15 against the Texans after the bye. 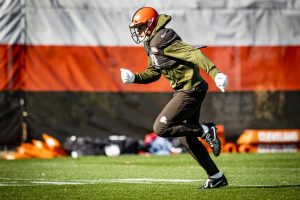 Browns tight end Austin Hooper runs a route Wednesday in his return to practice.
PHOTO COURTESY OF THE BROWNS

** The Browns continued to have no positive COVID-19 tests after an unidentified player felt ill Monday.

Rookie left tackle Jedrick Wills, the No. 10 pick, is a key part of an offensive line that’s made Berry proud. He had never played left tackle, so Berry’s been impressed with the transition at the NFL level.

“He has done a nice job and I think it is a credit to the work that he has put in and it is a huge credit to (line coach) Bill Callahan and (assistant line coach) Scott Peters with the work that they have done there,” Berry said. “He is by no means a finished product. Expect him to continue to make strides.”

“It is going to be a part of our DNA. That is a group that we want to make sure is strong and deep for the long term because it really does set a foundation for your offense.”