Mailbag: Is the run defense as bad as it looked against the Raiders? Is Myles Garrett really OK? What lineup changes are possible? 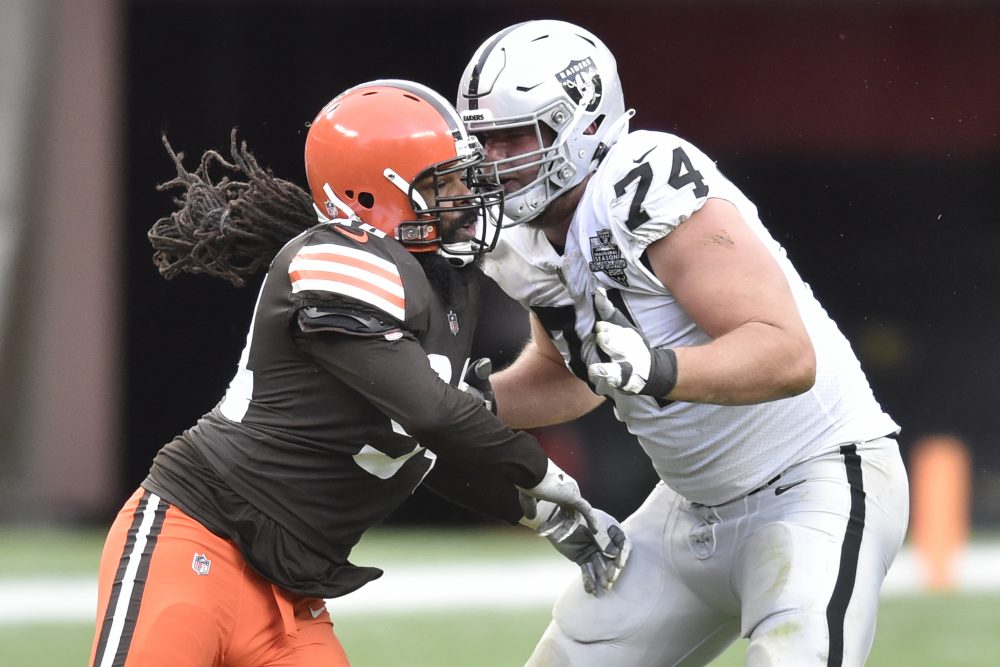 Q: Our defense, especially last Sunday, has reverted back to an age-old critical Browns problem: their inability to stop the run. Where is the problem — the D-line, the linebackers, or the scheme? Since we made no trades at the deadline, what can be done to fix this?

A: The 208 rushing yards by the Raiders were certainly all too familiar for a team that’s been awful against the run since it returned to the NFL in 1999. When coach Kevin Stefanski said his defense got knocked back, that showed the problems started up front. The uninspiring linebacking corps was then slow to fill the gaps, and the safeties weren’t able to help enough.

But before you get too down, I must remind you the defense entered the Raiders game ranked fifth against the run at 92.1 yards a game. So there’s a chance the 16-6 loss in blustery conditions was an anomaly. I would argue the line has too much talent to be a consistent problem, although the performance against the Raiders was troublesome. With ends Myles Garrett, Olivier Vernon and Adrian Clayborn and tackles Sheldon Richardson, Larry Ogunjobi and Jordan Elliott, there’s no reason the line should repeatedly give up ground.

The linebackers are a bigger concern, without a proven playmaker in the bunch. But with Mack Wilson continuing to get healthier, there’s a bit of hope for improvement. The defense had enough issues before it couldn’t stop the run, so it must quickly fix the problem in order to have a chance to reach the playoffs.

At the bye: 5 things to watch in the second half

Q: You are an excellent wordsmith and I was hoping you might humor a nervous Browns fan by dissecting the phrasing the Browns used to describe Myles Garrett’s injury. Does “nothing structurally significant” mean “nothing is wrong with his knee whatsoever” or does it mean “something structural is wrong with his knee but nothing significant”? Since the season kind of hinges on Garrett being as close to full strength as possible, I cannot get that word structural out of mind. Why did they put it that way?

A: Parsing answers by coaches is a part of the job, so I thought plenty about this. I took it to mean something was wrong with Garrett’s knee but there’s no structural damage. If it were perfect, Stefanski would’ve said it’s perfect.

But that doesn’t mean you should spend time panicking. Garrett’s knee could’ve simply been bruised, which means he can play with it and it will completely heal. And general manager Andrew Berry saying Wednesday that he expects Garrett to be at “full force” during the second half of the season reinforced to me the injury isn’t significant.

Finally, you’re absolutely right about the season hinging on Garrett. If he doesn’t keep up his stellar performance from the first seven games — nine sacks, four forced fumbles — it’s hard to envision the Browns making a serious run at a playoff spot.

Q: With the season half over and the team at the bye week, what adjustments to their depth chart would you propose the Cleveland Browns’ brain trust make? I’m not asking what you think they will or won’t do, but what you would do, based upon your exposure to the roster, its in-house assets and what has thus far been observed?

A: I’m not sure there are any quick fixes, especially after Berry didn’t make a trade before the deadline last week. But that doesn’t mean I wouldn’t try something.

The focus must be on the defense, which ranks 26th in the NFL at 29.6 points a game, and I’d start at free safety. Andrew Sendejo has given up way more plays than he’s made, so I would try Karl Joseph or Sheldrick Redwine as the starter. Joseph began the year as the starting strong safety but has been replaced by Ronnie Harrison. I’d like to see the Harrison-Joseph starting tandem.

At linebacker I’d continue to increase Wilson’s playing time and consider pairing him with Malcolm Smith in the nickel package. B.J. Goodson’s been solid in an every-down role, but I’d give the Wilson-Smith combination a try.

On offense, there’s nothing drastic needed. But rather than give Rashard Higgins the lion’s share of the reps as the No. 2 receiver, I’d use a rotation of Higgins, KhaDarel Hodge and Donovan Peoples-Jones. With Higgins’ lack of speed, the other two open the field more.

Q: Do you think Coach Stefanski will be immersing himself into the defensive discussions during this off week? How much involvement has he had up to this point? Do we know if he has any defensive philosophies?

A: Interesting question. And I’m sure Stefanski spent more time focused on the defense than he does during a game week.

I know he doesn’t ignore the defense, and I’ve seen him watch defensive drills intently during practice, but he trusts coordinator Joe Woods to put together the game plan  and call the plays. The bye was the perfect time for Stefanski to take a longer look. He talked a lot about how the coaches would self-scout during the bye, and with the defense’s issues, there was a lot to study.

As for Stefanski’s defensive philosophies, I believe they mirror his offensive ones — he wants to be stout on the line and aggressive. Woods has tried to implement that with an attacking front and more blitzes as the first half progressed. I would expect at least a few tweaks to the scheme and game plans coming out of the bye — because what they’ve been trying hasn’t worked.

Q: Read we missed out on a waiver claim of WR Dante Pettis. Why no follow-up effort to bring in newly released, local Clevelander & former Buckeye WR/PR Ted Ginn Jr. in for a tryout? Thanks!

A: I think the reported attempt by the Browns to claim Pettis shows that Berry recognizes the need for a speed threat without Odell Beckham Jr. Pettis was a disappointment with the 49ers but can run.

Ginn, of course, is one of the fastest players to ever play in the NFL. But he’s 35 years old and had only three catches this season for a Bears team that needs help at receiver. With that said, I could see the Browns taking a look at Ginn if he remains available and they want to replace Peoples-Jones as the returner.

And I’m sure Berry will continue to scour the waiver wire for a deep threat at receiver.

Q: Will Stefanski give Kareem Hunt some help with Dontrell Hilliard and D’Ernest Johnson?

That isn’t a knock on Hilliard or Johnson but a nod toward the possible return of running back Nick Chubb. We should know shortly if he’ll return to practice this week and has a chance to play Sunday against the Texans. If he can play, that would be a huge boost to the offense and allow Hunt to slide back into the No. 2 role.

Even if Chubb must miss another game or two with the sprained medial collateral ligament, I would expect Stefanski to ride Hunt until he comes back. Hunt should be healthier coming out of the bye, and he’s so much better than Hilliard and Johnson that I don’t think Stefanski would lessen his repetitions.

Mailbag: Who’s the best of the recent first-round picks? Will a pass rusher be added? Where’s the safety help?
Mailbag: What does Baker Mayfield have to do in 2nd half to solidify future with Browns? Would front office consider 9-7 and no playoffs a success? Can rookie Jacob Phillips save the LBs?