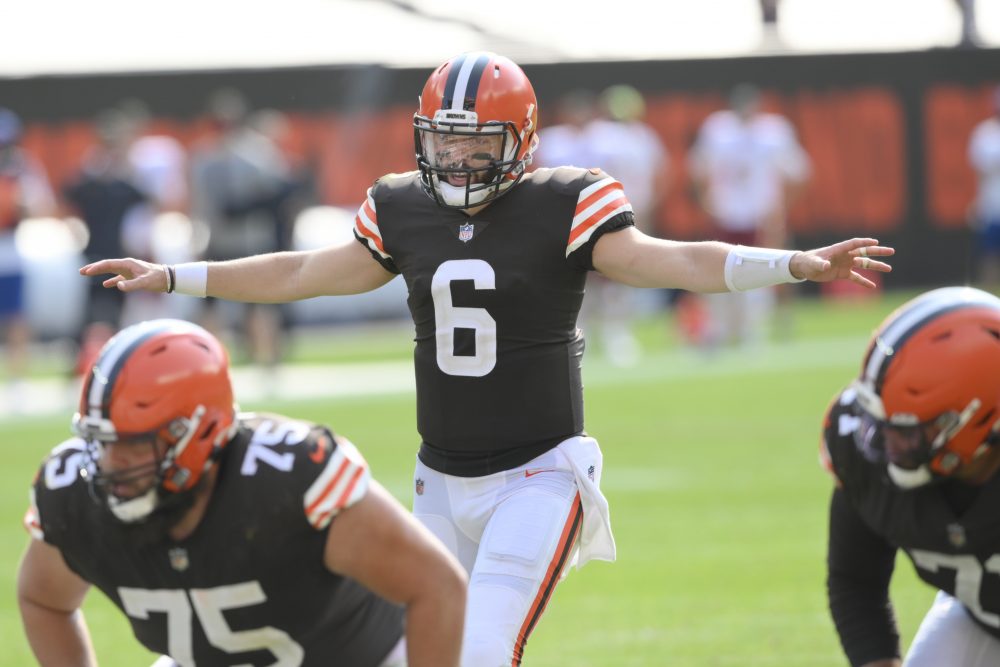 BEREA — Quarterback Baker Mayfield missed practice Monday as he isolated from the team and had to catch up by watching a tape of the session.

Mayfield was placed on the COVID-19 reserve list Sunday after being identified as a close contact of a staff member (not a coach) who tested positive Saturday morning. The earliest he can return to the team is Wednesday if he tests negative every day.

“He was on our virtual calls this morning so he is very much involved in what we are doing from a meeting room spot,” coach Kevin Stefanski said. “He will watch this tape. We will watch it with him.

“You wish you had all of your guys out there to get the reps — that is just natural — but we will make sure we bring him up to speed as soon as he is back in the building.”

The Browns had gone about three months without a positive test and had taken extra precautions recently to reduce close contacts in case someone tested positive as the state and country have set records for number of coronavirus cases.

“We try to be very careful and try to make sure at every moment we are reminding the guys,” Stefanski said. “There are going to be some unfortunate moments, but I can promise you all of our guys are being diligent about this. No one, I can promise you, is flippant in any way about the rules, protocols, etc. All of us have to make sure that we stay on top of it.

“We knew at some point with everything that is going on in our country that there is a high likelihood of something like this happening, and we have to make sure that this does not become a habit, so to speak.”

Although veteran Case Keenum stepped into Mayfield’s spot, it’s unsettling when the starting quarterback is absent.

“This is the new normal, right? It kind of is what it is, unfortunately,” tight end Austin Hooper said. “Definitely sucks. Baker is not just my teammate but one of my friends, as well, and my neighbor.”

Hooper said everyone in the organization can do everything right, and the virus can still find its way into the building.

“It is a nameless, faceless thing that is coming after you,” he said. “It is hard, even when you are as precautionary as we are in this building and away from the building. This is something people around the world are having an issue with, not just the NFL.”

The team instituted league-mandated intensive protocols after the positive test, so they met virtually Monday and the players were forced to practice in face shields attached to their face masks. Linebacker Mack Wilson said wearing the shield wasn’t bad but he “definitely” wouldn’t want to use one in a game.

He was focused on his teammates keeping each other safe.

“I feel like it is just very important that we just remind each other and remind ourselves to try to stay 6 feet apart,” Wilson said. “Just the moral of the story is to make sure that everybody is taking care of the team and trying their best to protect everyone by doing the right thing outside of the building.”

Nick Chubb, Wyatt Teller return to practice as Browns hope for boost as they start 2nd half of season

OUT OF THE BLUE

Hooper practiced for the second time since having an appendectomy Oct. 23. He missed two games but is expected to play Sunday.

“It just came out of nowhere, super random,” Hooper said. “Before I knew it, I was out on an operating table. Pretty fast process.”

He said he feels “great” and is “ready to get rolling again.” He talked to former Falcons teammate and former Browns center Alex Mack, who went through something similar during his time in Cleveland.

“It was good knowing a guy who has been through it,” Hooper said. “At the end of the day, it is not that big of a deal. A lot of people have to deal with it. Just unfortunate that it happened to me smack dab in the middle of the season. Definitely grateful to have him and just talk to him about the recovery process and things to do and things not to do.”

In his first six games with the Browns since signing a four-year, $42 million deal as a free agent, Hooper caught 22 passes for 205 yards and a touchdown.

“I am in no way disappointed with the impact that Austin has made,” Stefanski said. “Any success that we had on offense, No. 81 is heavily involved. We are really excited to have him back. He is a real threat in the pass game. He has been great in the run game.”

Left guard Joel Bitonio rode the stationary bike for the second straight practice as he deals with a left elbow injury but is expected to play Sunday. He hasn’t missed a snap since the start of 2017.

“I think you guys know him, and he will be just fine,” Stefanski said.

** After a self-scout by the coaches, Stefanski didn’t rule out lineup changes coming out of the bye.

“We will see how that all shakes out over the next few days,” he said. “We will make sure that we continue to have discussions with the coaches. As you know and as you have seen, we play a lot of people so we are going to be counting on a lot of guys. We are going to continue to rotate guys in there.”

Wilson has played the last six games after returning from a hyperextended knee but finally declared himself completely healthy.

“I am just happy to be back feeling like myself.”

He has 17 tackles and a pass defensed.

Defensive tackle Larry Ogunjobi joined the NFL Waterboys’ team of athletes dedicated to eradicating water scarcity around the world. Defensive end Myles Garrett is the captain of the organization.

Garrett and Ogunjobi were drafted in 2017 and are good friends.

The Browns activated linebacker Elijah Lee (6-foot-3, 230 pounds) over the bye. He had been claimed off waivers from the Lions.

** Offensive lineman Evan Brown was waived to make room for Lee, then re-signed to the practice squad.

** Safety Ronnie Harrison was fined $4,412 for unnecessary roughness for a face mask against the Raiders.