Jamie Gillan adjusts to life in pandemic, aims for consistency, confidence in Year 2 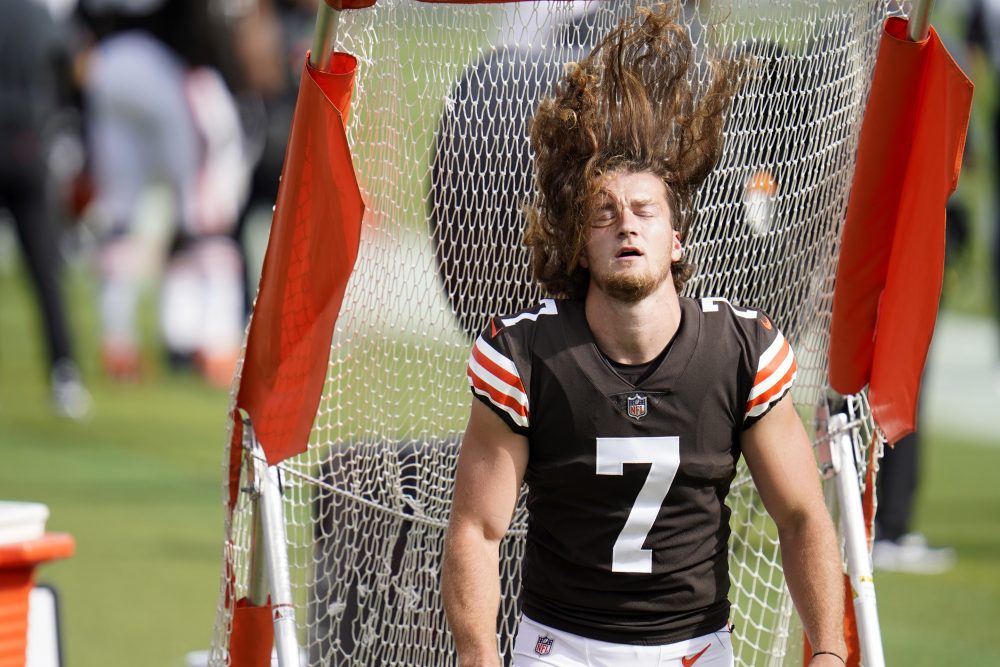 As the coronavirus pandemic ambushed the world and shut down Ohio in the spring, punter Jamie Gillan had time on his hands and a desire to help.

He’s friends with restaurant owners and chefs in the Tremont area of Cleveland in which he lives and volunteered to hand out, and even deliver, meals. So some Clevelanders got a surprise when they pulled up to the restaurant or opened their door and found a long-haired Scotsman with a rugby background, bulging muscles and a huge left leg providing their dinner.

“It was funny, sometimes I would hand out food, ‘Oh, you’re the Browns punter,’” Gillan, who also pulled a couple of shifts in the kitchen, told The Chronicle-Telegram by phone recently. “‘Yeah, have a great meal.’”

Gillan tried to make the best of the pandemic but, like far too many others, his life has been repeatedly disrupted.

He bounced around in search of places to kick, eventually returning to his family in Maryland when Northeast Ohio closed its football fields. He and his girlfriend got the disease — he never figured out how — then he lost taste and smell. Now he’s reining in his outgoing personality and spending more time at home to follow the team’s protocols and keep his teammates safe.

“Let’s say I wanted to go in somewhere that had way more people than there should be, and then bring COVID in (to Browns headquarters), I’d feel awful for that,” Gillan said.

The pandemic also canceled the preseason, which hurt Gillan, who’s in his second NFL season and only began punting a handful of years ago after coming over from Scotland. After an inconsistent start and a left groin injury, he’s settled in.

“It’s all just keep grinding through it,” he said. “There’s always going to be ups and downs. When you feel personally like you’re in a small down, you just work harder to get out of it. That’s the only way I know how to do it.

“When you see one or a couple really fly off your foot, you’re back in your zone and your elements. It’s nice to feel that way and you just keep building off that.”

Gillan became a fan favorite as soon as he opened his mouth in Berea. The Scottish accent was endearing enough, but Gillan also told his long shot NFL story that included stumbling into football, attending historically Black college Arkansas Pine-Bluff sight unseen and making the most out of a couple of NFL tryouts.

His zest for life and everyman persona were on display when he learned he’d made the team as a rookie while drinking at The Flying Monkey. His dad, a member of the Royal Air Force, was with him, and the neighborhood bar erupted when it heard the good news.

Gillan became a fixture in Tremont, easily recognizable and fitting in seamlessly. So when chef and restaurant owner Dante Boccuzzi asked him to lend a hand during the shutdown to feed people in the community, Gillan didn’t hesitate.

“Because they’re my pals, they’re my buds,” he said. “If I had asked Dante or one of my buds to come and help me out with something, I know they would find time. It’s just what friends do.

“Especially with having a bunch of time on my hands because of COVID and stuff in my little apartment, my day was about a little bit of lifting, stretching, punting, walking Bear (a German shepherd) and then I’ve got a whole day of nothing.”

Trying to help anyway I can! Be safe Cleveland! We’ll get through this 🧡 #tremont pic.twitter.com/PIKKLUvd4A 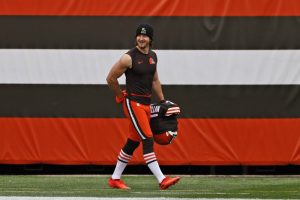 Browns punter Jamie Gillan walks on the field Nov. 1 before a game against the Raiders at FirstEnergy Stadium.
AP

His days are fuller during the season, but in normal times he’d stop at a pub, connect with friends and have a pint. That’s much tougher to do given Ohio’s laws and the NFL’s protocols.

Ohio set a record Tuesday with 6,508 cases over a 24-hour period, and the NFL sees more teams affected by the virus every day. Quarterback Baker Mayfield was placed on the COVID-19 list Sunday and forced to miss practice Monday after a Browns staff member tested positive.

“Yeah, it’s been just a little different,” Gillan said. “People you want to go catch up with and stuff and realize you can’t really do that. But whatever is best for the team. So I’m for the safety of everybody else, I don’t want to go in and not do what the protocol says.

“So just kinda staying at home. And then just spending time with my dog and my girlfriend.”

He laughed when it was suggested The Flying Monkey might go out of business without his patronage.

“I will not let that happen,” he said.

Do pull-ups help me punt?
Absolutely not.
Do they help me look like a football player?
Kinda #pintsandpunts pic.twitter.com/jFk4DrxIbx

No gym? No problem #corona pic.twitter.com/856UwqO76m

Gillan’s drink of choice is a pint of Guinness. When the virus wiped out his taste buds, the dark Irish stout wasn’t strong enough to be an exception.

“It didn’t taste anything like it,” he said. “It was so weird. It was just the texture that allowed you to almost know what it tastes like.”

He felt like he had a “bad cold” for the first couple of days after contracting the virus.

“Went away and then I was doing my quarantine for a couple weeks, and I was just going to the fridge and then, boom, my smell went and then my taste went,” he said. “I didn’t get my smell and taste back for about a month, fully.”

He spent the offseason in Cleveland and Maryland, kicking with Bear and working out. He built a makeshift gym in his parents’ garage and posted pictures on social media looking like a power lifter with giant muscles rippling.

Veteran special teams coordinator Mike Priefer was in Gillan’s corner from the start a year ago as he made the team instead of reliable veteran Britton Colquitt. Priefer wants Gillan to reduce his inconsistency and gain confidence in Year 2.

“He has a great personality, I think that is part of his deal,” Priefer said. “When he is bubbly, having fun and feeling good about himself, he is a really good performer. When he is thinking too much and he is worried about certain things, he is not quite as consistent.

“It is my job to actually keep him loose, believe it or not. I love Jamie’s personality. I think it adheres to him being a successful specialist in this league. The more experience he gets, the more confidence he gets and the better he is going to be.”

In a year of change, Gillan had another major adjustment to make when kicker Austin Seibert was cut. They entered the league together and figured to be a tandem for years, but Seibert missed two kicks in the opener and was gone. Gillan doubles as the holder for place-kicks.

“It was really tough to see him go because that’s my guy,” Gillan said. “And regardless of his couple misses, he’s a phenomenal kicker and a great guy.”

Cody Parkey took over and has made 32 of 34 kicks. While Seibert preferred the ball more vertical, Parkey wants Gillan to lean it forward.

Gillan worked tirelessly on the snapping machine to perfect the change. He wants to succeed for Priefer in every way.

“I’d catch a bullet for him,” he said. “He put his trust in me last year, he gave me the shot to even have an opportunity in the NFL.”

Rashard Higgins came long way to be in position to have huge game in win over Bengals
Jarvis Landry missing Odell Beckham Jr., playing rest of season for best friend and teammate