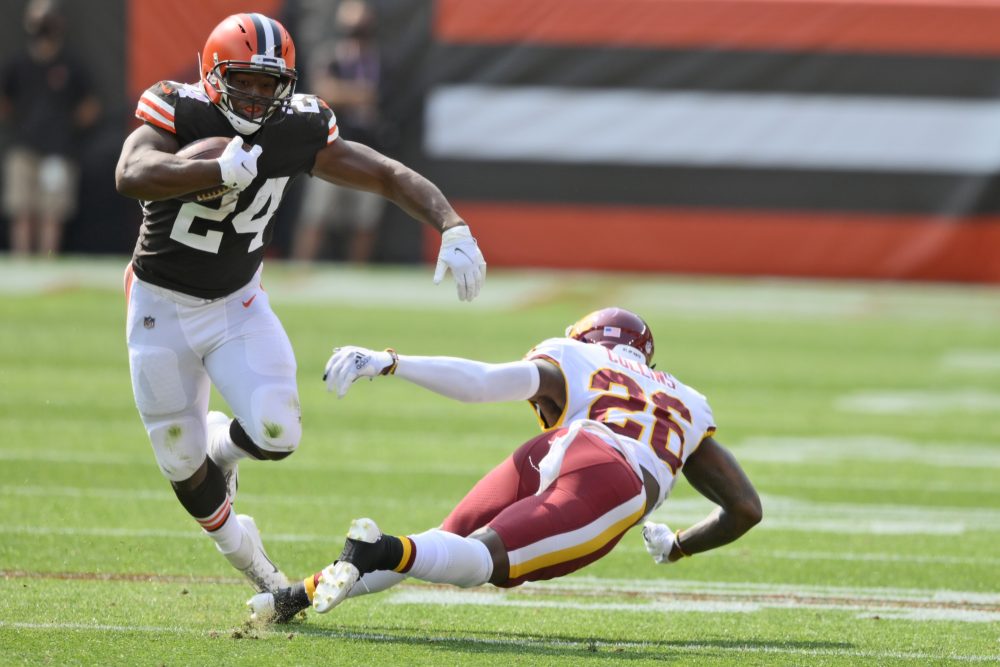 BEREA — Running back Nick Chubb tore the posterior cruciate, medial collateral and lateral collateral ligaments and suffered cartilage damage in his left knee during an ugly play in 2015 while at the University of Georgia.

So missing the last four games with a sprained MCL in his right knee didn’t faze him.

“This was nothing compared to what I have been through in the past,” Chubb said Wednesday after practice. “It was just maybe like a little hiccup. It is what it is.

“I am still blessed to be able to be here and not miss a whole season. That is behind me now. I am looking forward to getting out there on the field with the team.”

He didn’t know exactly what was wrong when he went down Oct. 4 against the Cowboys but realized immediately it wasn’t as severe as the previous injury.

“I was able to walk off the field, and I did not really feel anything,” he said. “I never really had pain at all in my knee. A little loose, but other than that, it has always felt good, and that gave me confidence from the beginning that I knew I would be able to come back and play to be 100 percent healthy, which I think has come along well.”

Chubb returned to practice Monday and said the knee felt good after both sessions. He knows it’s not his decision if he’ll play Sunday against the Texans at FirstEnergy Stadium.

“I have to go through doctors, team athletic trainers and coaches,” he said. “It is more than just me saying I feel great.”

Chubb rushed for 335 yards, a 5.9 average and four touchdowns in a little more than three games.

“He is progressing,” coach Kevin Stefanski said. “We will continue to use each of these days to move him along and then make a determination Friday on where he is.”

Stefanski said the same process applies to right guard Wyatt Teller, who missed the last three games with a calf strain. If Chubb plays, Stefanski said he’ll have a big say in his workload.

“We will talk to Nick and see what he is comfortable with,” he said.

Chubb wore a large brace Monday and Wednesday and said it’s too early to say if he’ll play in it. He was just glad to return to the field.

“It feels great being back out there with the team,” he said. “It has been about five weeks, and I’ve been bored sitting here and rehabbing every day, so I was excited to get out there and actually get to run and hang out with the boys on the field.”

Teller suffered a Grade 2 calf strain — “the ligament came off the bone a little bit but not fully,” he said — Oct. 11 against the Colts, missed three games and spent plenty of time in a walking boot.

“I still feel like I am walking with a pimp walk or something,” he said. “It is kind of funny. That boot is like 5 pounds. I am just trying to get back to normal and run fast and hit hard.”

Teller looked good during the early portion of practice open to reporters, was listed a limited participant and said he’s optimistic he’ll play Sunday, although the coaches will decide. He said he’d never missed a play in his career.

“I am still blessed,” he said. “It could have been much, much worse. I am back out there.”

“I snatched him down and he is a long guy,” Teller said. “When he fell, he kind of fell between my legs, and obviously I am not going to sit on DeForest Buckner. I am going to get off him as fast as possible. I tried to get off of him, and as I was popping my foot up to kind of get off him, it just popped.”

The only Browns team to win double-digit games since returning in 1999 was the 2007 edition with Romeo Crennel as coach. The Browns went 10-6 but missed the playoffs on a tiebreaker.

“That was a great season,” Crennel, who’s interim coach of the Texans, said on a Zoom call with Browns media. “The thing that I remember about that record is we did not make the playoffs, and that was the most disappointing thing. Generally you are supposed to make the playoffs when you win 10.”

He pointed to the Week 16 loss in Cincinnati as costing them a playoff berth. Derek Anderson threw 48 passes and was intercepted four times in the 19-14 loss.

“They beat us in a windy, cold game,” Crennel said.

Crennel, 73, passed Hall of Famer George Halas as the oldest man to coach an NFL team after taking over when Bill O’Brien was fired. Halas was almost 73 when he coached his last Bears game in 1967.

“I appreciate just being in the conversation with him because he was a great coach,” Crennel said. “Just to have my name mentioned in the same breath is special. I have been around a while — I do not know if you have noticed or not — but to be able to be around that long and still be able to function I think is good.”

Stefanski, 38, said he hasn’t considered if he’ll still be coaching at that age.

“He has done it at a high level,” Stefanski said of Crennel. “He has won Super Bowls. I am impressed with what he is doing with the team right now. Just looking back at his past, I think he should keep going as long as he is having fun doing it.”

The Browns are as healthy as they’ve been in a month, as all eligible players practiced.

** Stefanski didn’t have an update on cornerback Greedy Williams, who’s on injured reserve with a nerve problem in his shoulder. He hasn’t played this season.

Former Browns running back Duke Johnson is expected to fill in for David Johnson.

Fullback Andy Janovich is the team’s nominee for the Salute to Service Award, which is presented annually to someone in the NFL who demonstrates a commitment to honoring and supporting the military community. Janovich has supported Hunting with Soldiers, which allows combat veterans to hunt and fish at no cost to help them heal from PTSD.

** The Browns protected quarterback Kyle Lauletta, kicker Matthew McCrane, defensive end Cameron Malveaux and tackle Alex Taylor from being signed off the practice squad this week by other teams.