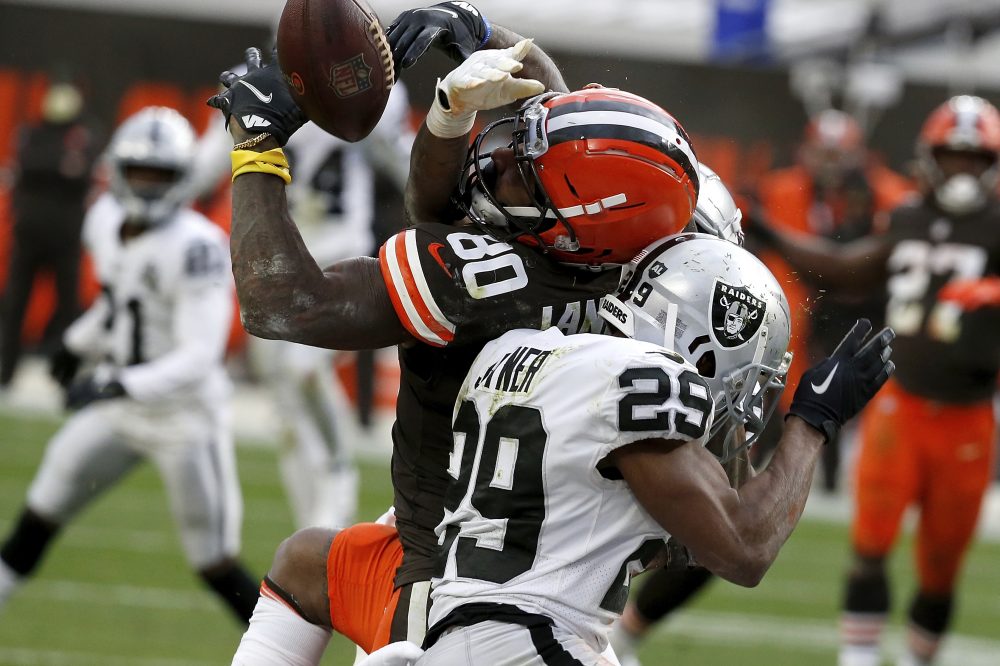 BEREA — Jarvis Landry might have needed the bye week more than anyone.

The first half of the season was filled with physical and emotional trauma for the five-time Pro Bowler and inspirational team leader.

Longtime best friend and fellow receiver Odell Beckham Jr. was lost for the season Oct. 25 with a torn anterior cruciate ligament. Landry had already suffered a broken rib Oct. 11 on a huge hit against the Colts. He kept playing but uncharacteristically dropped a handful of passes in the games that followed, including a key one in the end zone Nov. 1 in a 16-6 loss to the Raiders, and remains without a touchdown catch.

The break last week came at the right time.

“It was much needed, not only for my body, but for my mind and spirits, as well,” Landry said Thursday as the Browns prepared to host the Texans on Sunday.

He still hasn’t gotten over the loss of Beckham, who had surgery Tuesday in Florida and is expected back in time for next season, saying he couldn’t put the pain into words. The pair was inseparable on the practice field for the last two years.

“Every day that I come out here I’m still looking to the left and right hoping that he’s out here,” Landry said, talking to reporters for the first time since Beckham’s injury. “Making sure I’m doing my part as a brother, as a friend being there for him, making sure that his spirits are lifted, along with his family and friends. I’m praying for a speedy recovery and I can’t wait to get him back out there on the field doing the things that he loves.”

The Browns will need contributions from everyone on offense as they attempt to fill the playmaking void left by Beckham, and Landry said he’s put more responsibility on his shoulders. He leads the team with 33 catches for 419 yards.

“I just try to do the right thing consistently,” he said. “All the guys in the room understand the urgency and that we’re going to have to step up as a position group. Everybody acknowledges that and is ready for the challenge.”

Landry feels like he’s playing the rest of the season for himself and Beckham.

“Absolutely. He would do anything to be out here on this field,” Landry said. “And the guys in this building, from the coaching staff to the players that take the field with him, we all love the way he works, the leader that he was, the player that he is and the way he made plays to help us win these football games.

“We couldn’t really have done it without him. We have to continue to play for each other, play for him. He’s a part of this. That’s definitely added motivation for sure.”

Landry has plenty of things to drive him over the final eight games, especially after dropping three passes against the Raiders heading into the bye.

“I had opportunities to make plays and that’s what I want, that’s what we want as a team to be in those situations and make those type of plays, and I didn’t make them,” he said. “I’m very hard on myself and I took an evaluation of how I played throughout this year and dropping passes, I’m not content that it comes with the game. I pride myself on being a guy that can make those catches all the time, through any conditions.”

With the personal expectations comes pressure to make the pivotal plays.

“So when I don’t, not only do I feel like I let everybody else down, I let myself down because I feel like I live for those moments and that’s what it’s been throughout my career,” Landry said.

He didn’t use the rib injury as an excuse, but the coaches acknowledged it was a factor and coordinator Alex Van Pelt has noticed a difference in Landry this week.

“I think he is feeling better,” Van Pelt said. “Probably his best day of practice as far as just the speed, the ability to catch and pluck above his head.

“We have great confidence in his hands. He has made some really tough catches. It is unfortunate this last game he had a couple that I am sure he would like to have back. Not an issue that I am worried about.”

Landry crawled to the sideline after taking the direct hit to the side against the Colts. He returned to the game and made a couple of difficult catches, and then continued his streak of never missing an NFL game (104). He wasn’t going to let a broken rib keep him off the field.

“No chance,” he said with a huge smile. “It definitely was a battle for me, but that was part of the bye week, too, being able to get my spirits in a better place and heal up and be able to come out here this week and feel a little bit better throughout my rib cage and things like that.”

The pain remains from his lack of a TD catch at the midpoint of the season.

“Hurts my heart so bad,” he said. “But I’m still focused and I’ve got to make those plays and it’ll come. It’ll come.”

The bigger goal is making the franchise’s first playoff appearance since 2002. At 5-3 and with a favorable second-half schedule, the Browns are squarely in the mix.

“It feels good, but we’re still huntin’,” he said. “There are opportunities there in all of these games that we’ve lost that we’ve had opportunities to do things and fell short. But we’ve also learned from them and been able to bounce back pretty well.

“I’m excited about our future, but we’re taking this one game at a time.”

Jamie Gillan adjusts to life in pandemic, aims for consistency, confidence in Year 2
With Nick Chubb and Wyatt Teller back, Browns plan to return to league’s No. 1 run team