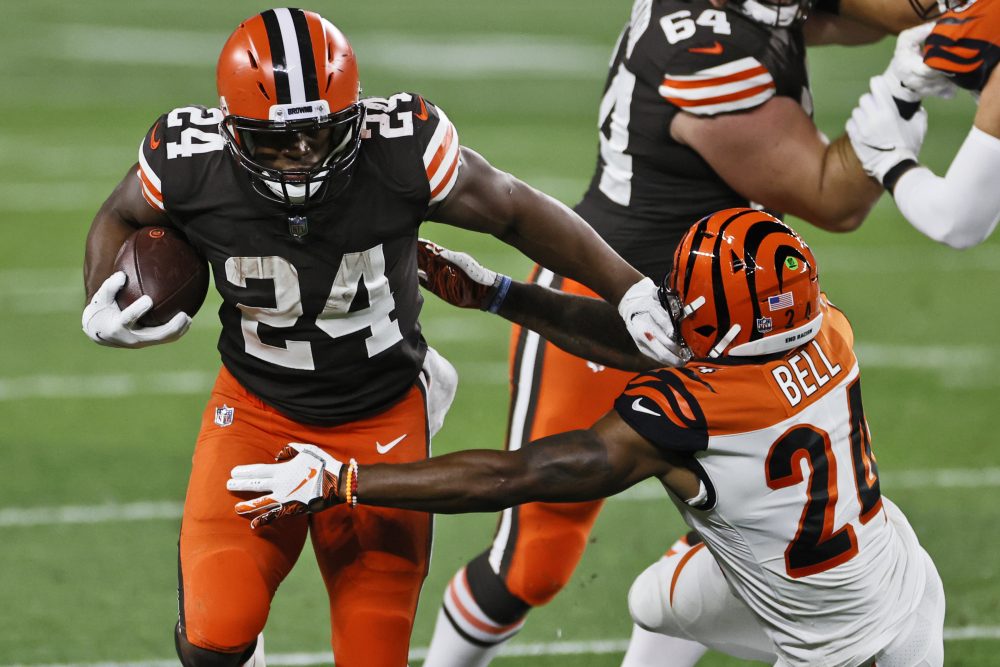 BEREA — Nick Chubb discarded the bulky knee brace after two practices. The right knee was unencumbered Thursday, 39 days after he suffered a medial collateral ligament sprain Oct. 4 against the Cowboys, and Chubb seemed on track to make his long-awaited return.

While the coaches and medical staff won’t make an official decision until Friday on Chubb’s availability for the game Sunday against the Texans, he looked good for the third straight practice and the Browns were optimistic their No. 1 running back would play.

“I would say I am hopeful, but I want to let this week play out,” coach Kevin Stefanski said before practice. “How he feels and how he checks in with the trainers will be the determining factor.”

Chubb finished second in the NFL with 1,494 rushing yards last year and was off to a fantastic start through three-plus games, with 335 rushing yards, a 5.9 average and four touchdowns. The Browns’ rushing attack dropped from first in the league (204.5 yards per game) to fifth (150.0) in the four games without Chubb, and the team is most looking forward to having the one-two punch of Chubb and Kareem Hunt to wear down defenses.

“When you see Nick in the huddle smiling and just ready to play football again, it makes you happy,” left guard Joel Bitonio said. “Nick runs his tail off and he runs hard. He finds those dirty yards. We are excited to have him back.”

Chubb attacked the rehab, and the Browns hope he’s back to his powerful, explosive self.

“He looked good yesterday in practice,” coordinator Alex Van Pelt said. “He got some touches. It was great to see him out there.

“The key is to get him as healthy as possible for that second-half-of-the-season push. Winter football is coming. We’re going to have to rely on the run game a fair amount, and to have him healthy, full of energy there for the second half is important.”

Chubb shared a meeting room with Duke Johnson for a season-plus with the Browns and expects Johnson to have added motivation Sunday as he returns to FirstEnergy Stadium as a member of the Texans. Johnson is expected to be the feature back, as starter David Johnson remained sidelined Thursday with a concussion.

“He will definitely have something to prove, and I also think (tight end) Pharaoh Brown will, too,” Chubb said, referring to another former teammate. “It will be exciting to watch and compete against those guys from across the field.”

The Browns drafted Duke Johnson in the third round in 2015 and he was a reliable third-down back. He requested a trade after the Browns signed Hunt and was dealt in August 2019 for a third-round pick.

“You look at last Sunday, he was really good. I expect that from him again,” Texans interim coach Romeo Crennel said. “Duke has been a great teammate and not complaining about the number of carries that he gets. He is just trying to make a contribution to the team. Then last week, he got an opportunity to make a tremendous contribution, and he showed up.”

Johnson had 73 yards on 20 touches in a win over the Jaguars.

The sun arrived in town after the 16-6 loss to the Raiders on Nov. 1, and it’s forecast to be gone by Sunday when the Browns return to FirstEnergy Stadium. The prediction is for rain and high winds, and the Browns must handle the conditions better than they did against the Raiders.

“We have to execute better,” Bitonio said. “We did not do well enough on offense against the Raiders in those circumstances. It is tough. The wind was blowing and all of those things. It is something that we preach. We play in Cleveland. There is going to be bad weather. I love it.”

Special teams coordinator Mike Priefer called the wind against the Raiders “ridiculous” and probably the worst crosswind he’s ever seen.

“Ultimately, you have to play a 60-minute game, regardless of the conditions, and I think the guys understand that,” Stefanski said. “Guys have to accept it. With where our stadium is located, weather is a part of who we are, a part of how we play and a part of what we play in, so that is just a matter of fact.”

The lack of packed stadiums because of the coronavirus pandemic has had an impact on home-field advantage across the NFL. Road teams entered Thursday night 67-65-1, the first time since 1983 (68-57-1) they had a winning record through nine weeks.

“First of all, our 12,000 is very loud,” Stefanski said of the crowd allowed at FirstEnergy Stadium. “I do understand with losing some of that crowd noise that does take away a huge part of the advantage of playing at home. For instance, we have not been on the silent count all year. Typically when you are going into a loud stadium, you spend a lot of time on the silent count and mixing up the silent count. We stayed on the quarterback’s voice all season. I would say that is a very big part of that stat.”

If rookie linebacker Jacob Phillips can stay healthy, he offers a ray of hope to a defense ranked 26th in scoring at 29.6 points a game.

Phillips (6-foot-3, 228 pounds) is the most physically imposing linebacker on the roster and can run. But the third-round pick out of LSU has been limited to three games by a knee injury sustained in the opener and aggravated Week 5. He hasn’t played since the Colts game Oct. 11 but returned to practice this week.

“We are evaluating him daily,” coordinator Joe Woods said. “Just giving him reps to see how much he can take. So far this week he has looked good. We have not seen anything physically that is bothering him.

“I think the big thing Jacob brings to the table, he is very competitive. So it is like when the lights come on, man, his hair is on fire, he is running to the ball. He may not execute everything properly all the time, but you know you are going to get a guy that plays hard. I think he will get better with more reps.”

Phillips has five tackles and a pass defensed in 38 snaps.

Defensive end Myles Garrett hasn’t been on the injury report this week after taking a hit to the knee against the Raiders that limited his playing time.

“He should be good to go,” Stefanski said. “He looks good at practice.”