Notes: Nick Chubb hits all “benchmarks” in return to practice this week, seems set to play Sunday against Texans 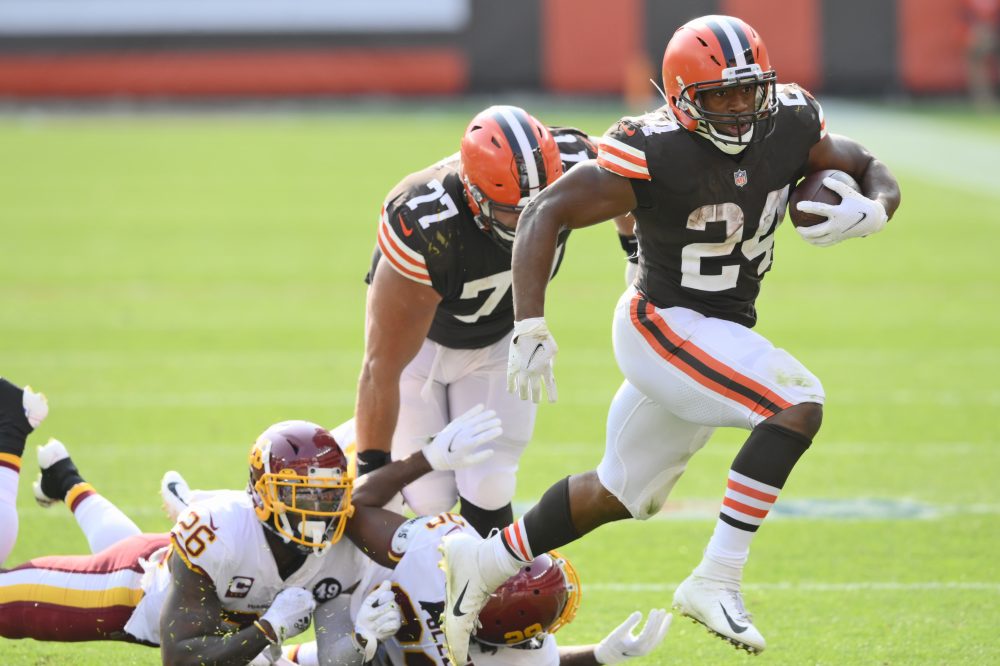 BEREA — Nick Chubb looked good in practice all week, had no setbacks with his right knee and passed every test.

He’s expected to be activated from injured reserve Saturday and play Sunday against the Houston Texans, but coach Kevin Stefanski wanted to meet with Chubb and the medical staff before declaring his No. 1 running back ready to go

“I will let that conversation happen first,” Stefanski said Friday after practice.

All signs pointed to the return of Chubb, which would have a huge impact on the run game that dropped from first to fifth in the NFL in his absence.

“We wanted to use each one of these days and see how he responded each day,” Stefanski said. “He hit all of the benchmarks, so it’s just a matter of making sure we’re all on the same page in making sure that he’s ready to go. If he’s ready, he’ll be out there. And if we feel like he’s not ready this week, then we’ll make that decision.

“We are going to do what is best for Nick and best for the Browns.”

Chubb wasn’t listed on the injury report because he remains on injured reserve. The team must activate him Saturday in order for him to be eligible Sunday.

Chubb sprained a medial collateral ligament Oct. 4 vs. the Cowboys and has missed four games. He had 335 rushing yards, a 5.9 average and four touchdowns in three-plus games.

Chubb returned to practice Monday and wore a bulky knee brace Monday and Wednesday. He didn’t wear it Thursday or Friday and led the running backs through their drills.

Right guard Wyatt Teller was cleared to play after missing the last three games with a calf strain. He returned to practice Monday and was a limited participant all week.

“He is ready to go,” Stefanski said. “He looked like Wyatt Teller at practice and then we get to get him out there on Sunday, and he has to do the same.”

Teller is Pro Football Focus’ highest-graded guard in the NFL.

** Rookie linebacker Jacob Phillips (knee) was the only player on the official injury report. He was listed as questionable.

Omenihu didn’t practice all week, and Cole was limited Thursday and Friday.

Defensive end Myles Garrett is trying to get to the elite level Texans end J.J. Watt has resided at for years. Garrett will get the chance to prove he’s arrived when they share the field Sunday.

“Sure, a player across the field playing your position and trying to do the same thing that you do, there will be more juice, and I think Myles will have more juice as a result of it because of what J.J. has been able to accomplish in his career,” Texans interim coach Romeo Crennel said. “I like Myles a lot from what I see. He has good length, he has good quickness off the ball, he has flexibility and he doggedly pursues the quarterback. Generally, that means sacks.”

Garrett is tied for the league lead with nine sacks and four forced fumbles as he goes for his first NFL Defensive Player of the Year award.

Watt has four sacks and two forced fumbles. He recorded his 100th sack last week, becoming only the fourth player in NFL history to reach the milestone in 120 games or less. He and Hall of Famer Lawrence Taylor are the only players with 100 sacks and three DPOY awards.

“He is a very, very unique player in that his combination of size, strength, athleticism, quickness and power is really unrivaled,” Stefanski said of Watt. “He gets those long arms up and he bats balls in the air. I want to say he has 25 forced fumbles in his career. He is a very, very disruptive player.”

Nickelback Kevin Johnson was the No. 16 pick of the Texans in 2015.