With Nick Chubb and Wyatt Teller back, Browns plan to return to league’s No. 1 run team 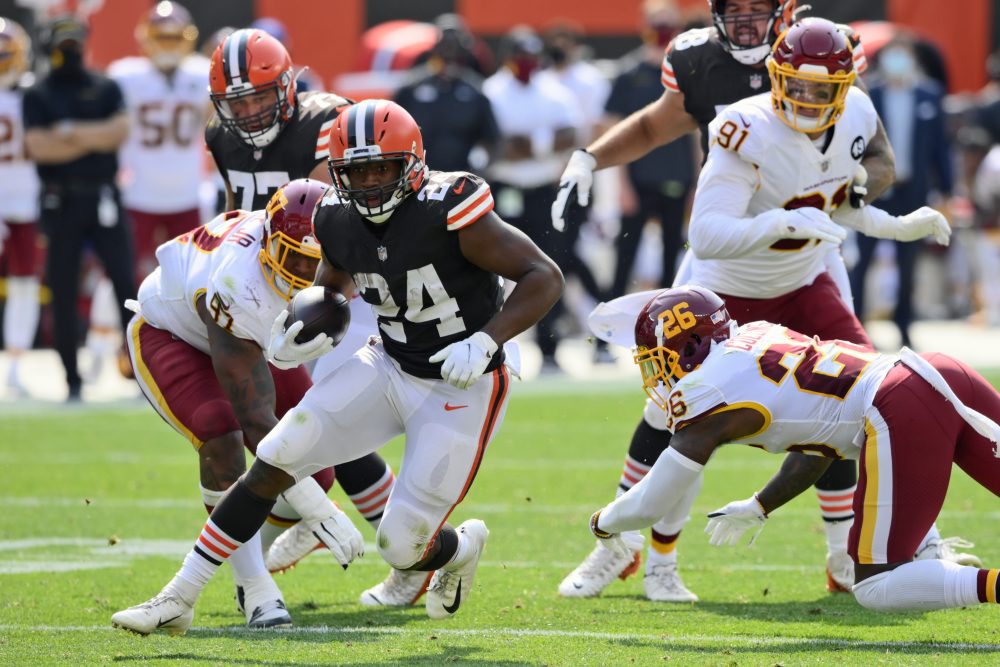 The visuals remain vibrant, even after they vanished for a few weeks.

Nick Chubb making a defender miss at the line then exploding for a long run. Wyatt Teller driving a linebacker into the ground. Teller pulling around the corner to clear a path as Chubb follows in his wake.

The Browns’ run game was something to behold in the first four games. Teller a revelation at right guard, the final piece on a stacked line. Chubb affirming himself as one of the NFL’s elite runners. Kareem Hunt looking like the best backup in the league, using his fresh legs to bury opponents in the fourth quarter.

Chubb and Teller will return to the lineup Sunday against the Texans at FirstEnergy Stadium, along with tight end Austin Hooper. They carry with them the expectation of restoring the Browns as the league’s best rushing team.


“We want to get that reestablished,” coordinator Alex Van Pelt said. “We started strong and we kind of did not hit our marks in the last few games. Getting everybody back and healthy here, hopefully in the second half we get back on track to where we started the season.”

“Excited to have the team back together, and hopefully we can get back on track and start winning some football games,” Chubb said.

The Browns (5-3) led the league with a staggering 204.5 rushing yards a game through four weeks and averaged 5.9 a carry and 35 carries a game. In the next four games after Chubb and Teller were injured, they averaged 95.5 yards, 3.9 a rush and 25 attempts.

Chubb has been the engine of the offense for the last two seasons, and was sorely missed when the medial collateral ligament in his right knee was sprained Oct. 4 while pass protecting against the Cowboys. He was placed on injured reserve, missed four games, returned to practice Monday coming off the bye, looked like himself and was activated Saturday.

He had 335 yards, a 5.9 average and four touchdowns in three-plus games. His six rushes of at least 20 yards still lead the league. He’s a rare combination of power, balance, effort and breakaway speed.

“Nick is damn near superhuman,” Teller said. “I am excited to come back with him. I am thankful.”

Browns fans love their offensive linemen, and Teller earned their admiration before his calf strained Oct. 11 against the Colts. Teller didn’t wow anyone as the starter for the final nine games a year ago and wasn’t guaranteed the spot before the season.

He spent the offseason getting stronger and fit perfectly with the wide zone run scheme installed by coach Kevin Stefanski and line coach Bill Callahan. Teller was a new man in the first four games, intimidating opponents and energizing teammates with his brutish style of play.

“He definitely brings that edge. I think the guys feed off of that,” Van Pelt said. “When he plays, he is very aggressive and very physical. Hopefully getting him back here soon will bring that nastiness spot back.”

Several players and coaches were most looking forward to Chubb’s return because it will reunite arguably the best backfield tandem in the game. Hunt won the NFL rushing title as a rookie with the Chiefs in 2017 and believes he can handle the feature back role, but was slowed by groin and rib injuries during Chubb’s absence.

Hunt should be healthier after the week off, another boon to the rushing attack.

“Having that two-headed monster of those guys being able to sub fresh legs in as needed, that is something that we are extremely blessed to have,” quarterback Baker Mayfield said. “It is a huge part of our offense to be able to sub those guys in with fresh legs, and it wears on defenses. Later in the games when they are able to still be somewhat fresh, it is amazing how the grind and the ground game pounds on those guys.”

Hunt’s 529 rushing yards rank fifth in the AFC, he has 18 catches for 113 yards and is tied for 10th in the league with seven total touchdowns.

Texans interim coach Romeo Crennel made his career on defense and is perplexed by how to deal with the two-pronged attack.

“That is a great one-two punch that you guys have there,” he said. “Now with (Chubb) back, it is doubly difficult to try to figure out how they are going to try to attack us. We know we have our hands full, but we have to try to load up on the run as best we can, and knowing that if you load up on the run, that opens some things up on the back end.”

If the Browns can again control the game on the ground, it will have a ripple effect throughout the team. Mayfield will feel less pressure to carry the offense, and throws should be easier with defenses devoted to stopping the run. And the struggling Browns defense would be on the field less if the offense owns time of possession.

The style of play will be especially important as the weather turns and the Browns try to reach the postseason for the first time since 2002. The forecast for Sunday calls for high winds and rain, which Stefanski and the Browns are determined to handle better than in the 16-6 loss to the Raiders before the bye.

The Browns allowed 208 rushing yards to Las Vegas while being limited to 101. That shouldn’t be replicated against a Texans team ranked 31st in rushing offense (87.6) and 32nd in rushing defense (159.5) despite having three-time Defensive Player of the Year J.J. Watt at defensive end.

“Winter football is coming,” Van Pelt said. “We are going to have to rely on the run game a fair amount.

“We have to get that run game cranking when we get those days when it is blowing 40 miles per hour.”

Jarvis Landry missing Odell Beckham Jr., playing rest of season for best friend and teammate
Jarvis Landry honored to be in select company of players with 600 catches in their first seven seasons