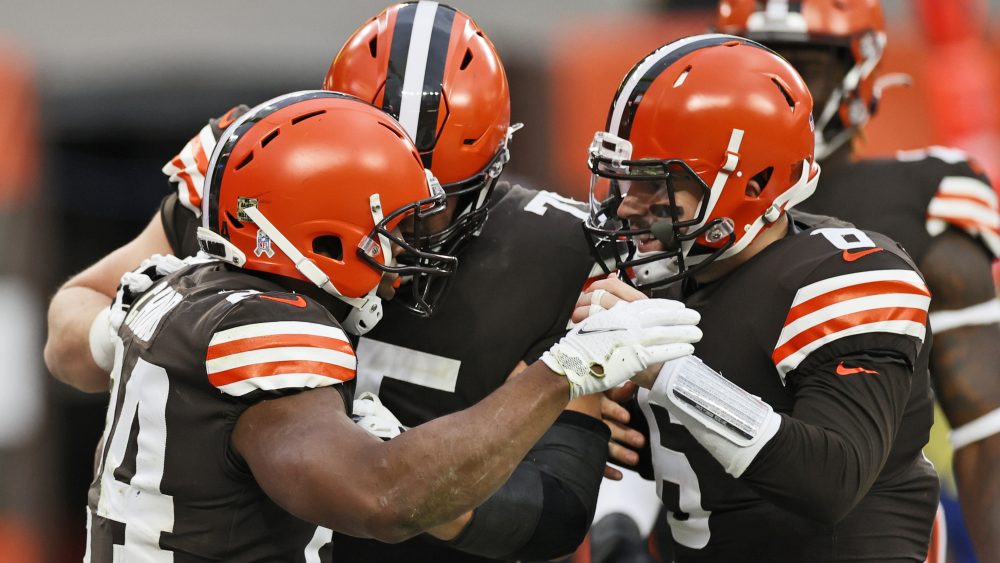 CLEVELAND — A severe storm that included lightning, sheets of rain and hail forced the teams back into the locker room after the national anthem, a first for eighth-year defensive tackle Sheldon Richardson.

Coach Kevin Stefanski had never experienced wind this bad — 26 mph out of the south/southwest at kickoff and gusts hitting 60 mph — and almost had his play sheet blow out of his hands a couple of times.

Short passes nosedived, sailed or were knocked to the side.

The Browns game vs. the Texans on Sunday at FirstEnergy Stadium was always going to be decided on the ground. It just took awhile for the Browns to impose their will and show their superiority.

When they did, they left no doubt.

Nick Chubb, in his return from injured reserve, and Kareem Hunt, refreshed after the bye week, took over in the fourth quarter as the Browns beat the Houston Texans 10-7 on the lakefront. Perhaps the league’s best running back tandem was held to 59 yards on 16 carries in the first half but finished with 230, a touchdown and a 6.1 average on 38 attempts.

“When I watch Nick, it’s like watching poetry in motion,” defensive end Myles Garrett said. “I wouldn’t say it’s like watching Gale Sayers because he doesn’t really have that fluidity, but just how smooth he runs, how he gets by people, it kind of reminds me of that.

“But Kareem, he’s just a force. He’ll run through you, he’ll go by you, he’ll stiff-arm you. He runs real aggressive.”

Chubb had missed four games with a knee sprain. He said the knee felt good and he knocked off the rust during the game.

“I was definitely feeding off Kareem the whole game,” he said. “He was out there making great plays and making hard, tough runs, and I wanted to follow in his footsteps. He definitely provided me energy throughout this game.”

The Browns are 6-3 overall, 4-1 at home and in the thick of the AFC wild card race. For the third time they bounced back from a loss with a victory.

This rebound included weather revenge after a 16-6 loss to the Raiders on Nov. 1 in blustery and wet conditions. The Browns were outrushed 208-101 yards by that dome team but were determined not to let it happen again against the Texans, especially coming off the bye and with Chubb and right guard Wyatt Teller back in the lineup. Teller missed three games with a calf strain.

The Browns rushed 41 times and threw 20. They outrushed the Texans 231-90 and won the time of possession 33:20 to 26:40. And when they most needed to pick up first downs — and the Texans knew they were going to run — they drove the nails through the coffin.

The run game was needed again after the Texans (2-7) cut it to 10-7 on a 16-yard touchdown pass from Deshaun Watson (20-for-30 for 163 yards, TD, two sacks, 91.4 passer rating) to former Browns tight end and Brush High School graduate Pharaoh Brown with 4:59 left. The Texans had one timeout left after interim coach Romeo Crennel, who coached the Browns from 2005-08, had wasted two, but rookie returner Donovan Peoples-Jones dropped the ensuing kickoff and slipped down at the 3-yard line.

The Browns overcame bad field position all day — back-to-back drives in the first half started at the 4 — and did it again with the game on the line. Hunt rushed for 3, 6, 2, 19, 3 and 4 yards to set up third-and-1 at the 40 with 1:07 left. Chubb took over, got around the left edge and motored down the sideline.

“There were a lot of yards after contact where they just kept dragging people along with them,” quarterback Baker Mayfield said.

The statistics could’ve included another yard and touchdown, but Chubb stepped out of bounds at the 1 after the 59-yard run on third-and-3. A touchdown would’ve given the Texans a chance for a miracle, but stopping short allowed the Browns to take a knee and run out the clock.

“I would not have been mad at him if he scored, but we told him — our code word for that is ‘no mas,’” Stefanski said. “You are thinking gain the first and go down. Well, he gained the first and more. Knowing Nick, when you tell him to do something, he is going to do it.”

The start was delayed 35 minutes by the storm, then the Browns took the kickoff and marched down the field. A snap snafu on third-and-1 from the 7 led to an intentional grounding penalty, but Cody Parkey made a 41-yard field goal into the Dawg Pound, always the trickier end.

Those were the last points for 39 minutes and 55 seconds.

The Browns defense found a way to get off the field without the benefit of a takeaway, forcing four punts — four times as many as the Bengals and Raiders combined for in the previous two games. The most important stop came at the 2-yard line in the second quarter.

Myles Garrett stops Deshaun Watson near goal line, and defense finally finds ways to get off field without takeaways

Linebacker B.J. Goodson tipped a Watson pass for an incompletion on third down, and on fourth down Garrett dropped Watson for a 2-yard loss on a quarterback draw to preserve the 3-0 lead.

“They called the number of their guy, which I understand, and then our guy made the play,” Stefanski said.

The defensive line that was knocked back against the Raiders held firm. It also penetrated, combining to share both sacks — tackle Sheldon Richardson with two halves, and Garrett and tackle Larry Ogunjobi with a half-sack apiece. Garrett has 9½ sacks on the year.

“It is a testament to great play calling, and guys were rushing the passer well,” Garrett said. “It was a windy day so they were not really trying to go deep or really trying to set up their passing game. When they were, we were on it.

Everyone in brown and orange learned from the discouraging defeat to the Raiders, and the Browns were determined to prove they’re built to be a bad-weather team. Mayfield was 12-for-20 passing for 132 yards, a sack and a 79.6 rating, but he didn’t commit a turnover and was happy to watch Chubb and Hunt own the day.

“I am very proud of our team just overall with dealing with the circumstances,” Mayfield said. “It is a great team win, but we are not done yet. We talked about it. It is just something to build on and continue to improve because there is still a lot of room for improvement.”