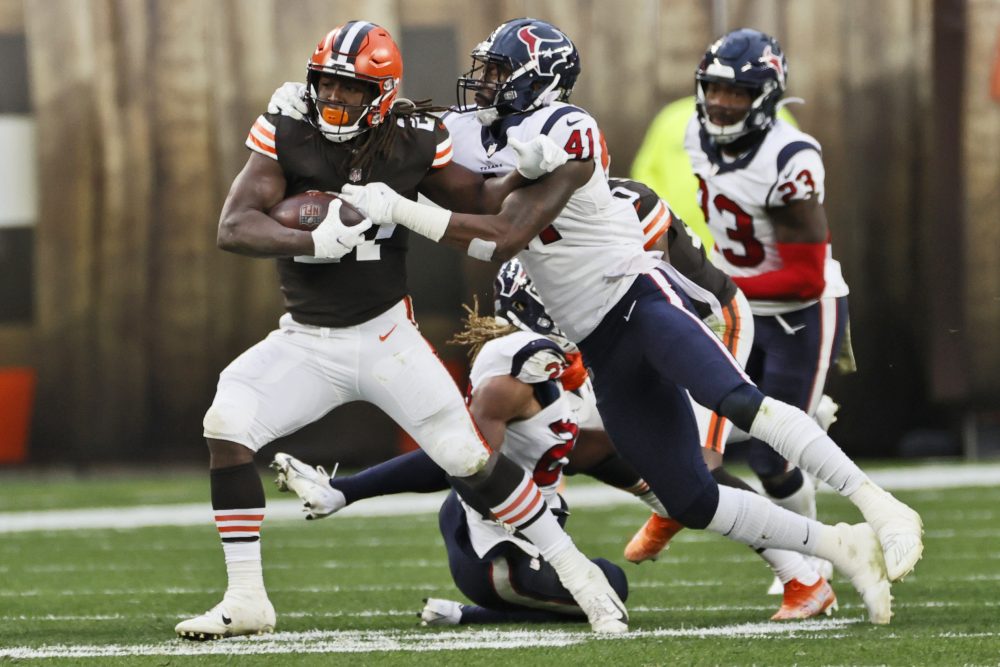 The Browns’ trail to the postseason needs to be blazed by Nick Chubb, Kareem Hunt and a cloud of dust … or mud … or snow, sleet or hail. Whatever. Just give one of them the ball over and over again until victory is secured.

Don’t make it any more complicated than it needs to be. That’s what the Browns did Sunday as the Cleveland Ohioans beat the Houston Texans 10-7 in a game that was otherwise about as exciting as a silent auction.

Mr. Bash and Dr. Gash bashed and gashed their way through the visitors’ defense for a combined 230 yards. It would have been 231 but, in his last carry of the game, His Chubbship ran 59 yards down the sideline, then, one stride away from a meaningless touchdown, he dropped anchor by stepping out of bounds at the 1-yard line, insuring that the Texans would touch the ball no more, as Baker Mayfield ended the game by taking two knees.


It was the kind of intelligent, unselfish play rarely seen in a sport peopled with too many “it’s all about me” horn-honkers.

Predictably, Chubb’s coach was thrilled by the maneuver.

“That indicates the kind of person he is,” said Kevin Stefanski. “We’re looking for smart, tough dudes, and Nick is that.”

In his first game back after missing the previous four with a knee injury, Chubb rushed 19 times for 126 yards, an average of 6.6 yards per carry. His fellow ground hog, Hunt, careened for 104 yards on 19 carries (5.5 per carry). Their combined 230 yards were only 13 shy of the total yards gained by the entire Texas team.

“They push each other,” said Stefanski. “They do their jobs at a high level and they are all about the team.”

In other words, a coach’s dream, and if the Browns are dreaming about reaching the playoffs for the first time since 2002, a good way to go would be riding the Chubb-Hunt stagecoach to the end of the line.

“They take 3-yard runs and pop them for long runs. We’re blessed to have those guys,” said Mayfield.

It’s almost like the Browns have two of the same guy. They’re different type of runners, but the results are the same.

“Nick is poetry in motion, how smooth he runs,” said Myles Garrett.

“Kareem brings tempo and electric runs,” said Mayfield. “He fights off tackles and brings energy to our huddle. He wants to win any way he can.”

The best way for the Browns to win enough of their remaining games to qualify for a trip to the Emerald City is to consistently unleash their two thoroughbreds. Build game plans around them and stick with those game plans. The circumstances demand it.

Bad weather begs for a dependable ground game. The Browns have that. The Browns’ best receiver is out for the year with an injury, a major loss. The Browns also have a vastly improved offensive line that can road-grade gaps in defenses for Hunt and Chubb to bash and gash.

There’s also the quarterback situation. Mayfield is, to borrow a phrase used by former Indians manager Charlie Manuel, “a hard-tryer,” but until his performance consistently suggests otherwise, Mayfield’s ceiling seems to be as a game manager rather than a game winner.

That’s still another reason — a big one — why the firm of Chubb & Hunt should be open for business early and often, and late and frequently.

When Chubb and Hunt are running the ball, it means the vertically challenged Mayfield isn’t trying to find receivers from within the pocket, or trying to do something daring after abandoning it.

Turnovers are bad anytime during the season. But when a team is in the homestretch of an attempted run for the playoffs, turnovers can be season-wreckers. Chubb has only fumbled four times in 625 career touches and Hunt has fumbled just three times in 767 touches.

It’s not often that a team has two elite players who play the same position, but the Browns have that at running back, and in their remaining games they need to lean on them.

Sure, there will be some speed bumps along the way. The Steelers’ pack-of-wild-dogs defense is a major one that comes immediately to mind. But as the Browns come out of the bye week with a much-needed, if action-free, victory, the message is clear.

They have two healthy running backs that are a load for opposing defenses to slow down, much less stop. Don’t do them a favor by not taking full advantage of it. For the Browns, the road to the playoffs can be found at the corner of Chubb Street and Hunt Boulevard.