Myles Garrett stops Deshaun Watson near goal line, and defense finally finds ways to get off field without takeaways 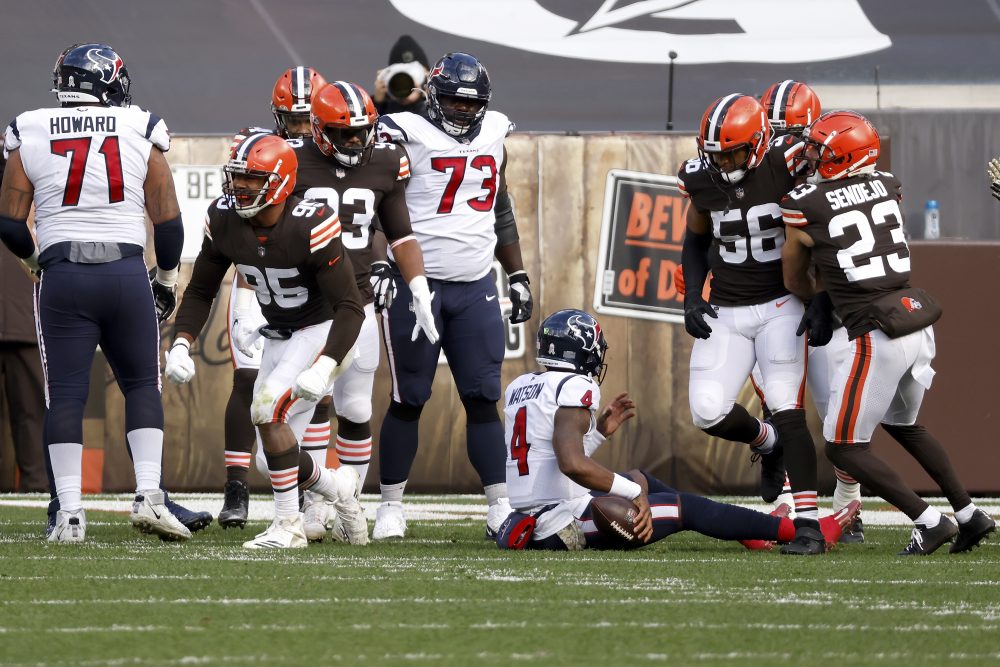 CLEVELAND — The Browns did something Sunday they hadn’t all year — win without a takeaway.

The defense that couldn’t get off the field in the first half of the season finally found a way in the 10-7 win over the Texans. It made up for the lack of turnovers with a crucial stand at the goal line and timely third-down stops.

“We are always going to be looking to take the ball away, and then there are moments where they do not present themselves or the offense does a great job,” coach Kevin Stefanski said. “Credit to them in that we were not able to get one, but the ability to get off the field on third and fourth down is just so big.”

The Texans still converted 50 percent on third down (7-for-14), but the Browns forced four punts. The Bengals and Raiders combined for one punt in the previous two games.

“We missed out on our quotas of getting the ball back to the offense, but we did something that we did not in the past two weeks and that is make them punt,” defensive tackle Sheldon Richardson said. “That was a big thing for us. Just playing sound defense and playing together. We did that.”

The Browns entered 30th in the NFL on third down, as opponents converted 48.5 percent. They were worse on fourth down, allowing 13 of 14 to be converted.

The second fourth-down stop of the year might have been the play of the game.

The Texans had fourth-and-goal from the 2 trailing 3-0 in the second quarter. Points were going to be at a premium with the wind gusting to 60 mph, so a touchdown could’ve changed the outcome.

Electric quarterback Deshaun Watson took the shotgun snap, waited a beat and headed for the end zone on a designed draw but was met by defensive end Myles Garrett for a 2-yard loss.

“I knew they were not going to drop back and pass with such a dynamic quarterback like Deshaun,” Garrett said, noting there weren’t any running backs in the backfield. “I just took two steps and kind of tried to bait him up the field, and then I knew he was going to try and run behind me and I just took it.”

Stefanski said the Texans trusted “their guy” and “our guy” made the play.

“They just did a good job of stuffing us,” Watson said. “That was it. I was trying to find an alley in a hole, and Myles made a good play of redirecting and they had stopped us.”

Garrett had six tackles, two for loss, and a half-sack. He’s up to 9.5 sacks on the season, which leads the NFL, and has made a key play in all six wins.

He has 40 sacks for his career, reaching the milestone in 46 games, the fifth-fewest in NFL history. He shattered the Browns record, as it took Michael Dean Perry 76 games to reach 40.

“He is athletic. He is good, smart. He plays hard,” Watson said. “They put him in a great position to make plays, and that is what he did.”

Garrett surprised Watson when he chased him down along the sideline on a scramble.

“He was really sprinting and caught up to me very, very fast so that caught me off-guard,” Watson said. “He is athletic, and he has some great talent.”

The Browns had 14 takeaways in the eight games before the bye last week and would’ve been lost without them. The weather helped neutralize Watson and the explosive Texans passing game, but the Browns (6-3) held Houston (2-7) to 243 net yards — 90 rushing and 153 passing.

The defensive line responded after getting pushed back consistently in a 16-6 loss to the Raiders on Nov. 1 in which Las Vegas rushed for 208 yards.

Richardson had two half-sacks to give him 3.5 on the season. Tackle Larry Ogunjobi picked up the other half-sack.

Garrett was limited by a knee injury vs. the Raiders but looked back to normal Sunday after resting over the bye.

“I felt great,” he said. “Nobody is going to be 100 percent, but I was good enough to get out there confidently and put my best foot forward.”