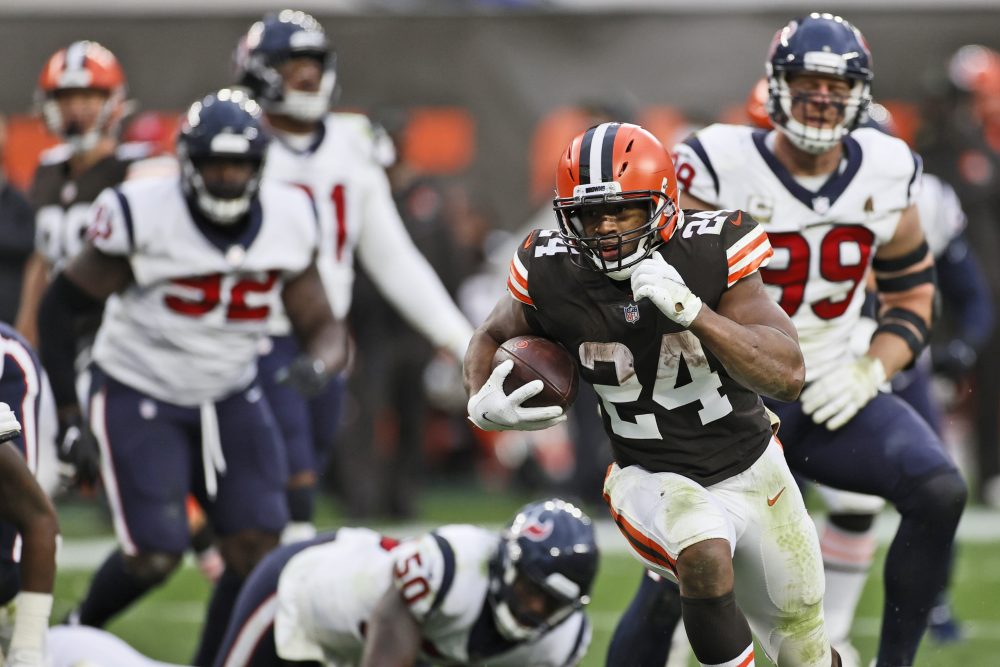 CLEVELAND — The fantasy football owners who have Nick Chubb on their team and the gamblers who took the Browns minus the points grumbled.

The Browns celebrated the special act of unselfishness.

When Chubb turned the left corner with about a minute left Sunday, there were no defenders between him and the end zone. Instead of taking the sure touchdown, he stepped out of bounds at the 1-yard line, as coach Kevin Stefanski and quarterback Baker Mayfield had instructed. The first down enabled the Browns to run out the clock for the 10-7 win, whereas a touchdown would’ve given the Texans a chance for a miracle.

“Luckily the run was a little bit longer because I didn’t think about it until the last 10 yards,” Chubb said of the season-long 59-yarder on third-and-3. “I think that reminded me, running all the way down there.”

Chubb finished with 126 yards on 19 carries, a 6.6 average, as he returned after missing four games with a sprained medial collateral ligament. He scored a 9-yard touchdown early in the fourth quarter and admitted it’s hard not to go into the end zone.

“It is. I think if I hadn’t gotten one earlier, I would have scored, but it worked out,” he said.

Chubb’s team-first attitude has never been questioned, but the latest example earned praise from teammates.

“He is selfless. He has always been selfless,” defensive end Myles Garrett said. “It reminds me of (Hall of Famer) Barry (Sanders) and how Barry always throws the ball to the referee when he scored a touchdown. He has that cool, calm demeanor every time he is on the field. He does not get too high or too low.

“When I saw him, I was like, ‘I would not mind if you scored,’ but I know what he is going to do because he has always been that guy.”

Stefanski used the code “no mas” so players knew to go down after getting the necessary first down to end the game. He told Chubb before the third-down carry but said he wouldn’t have been mad if Chubb succumbed to temptation.

“The play is indicative of the type of person and player he is,” Stefanski said. “We are looking for smart, tough dudes, and Nick Chubb is that.”

The Browns were favored by 3.5 or four points in most lines, so the touchdown would’ve turned a loss into a win. And a touchdown is always helpful in fantasy football.

“I guess I feel bad for that aspect, but we got the W. That is what matters most,” Chubb said.

The only thing he would’ve done differently is slide down instead of going out of bounds. Mayfield had to take a knee twice instead of once in the victory formation.

“I definitely would have scored that one,” defensive tackle Sheldon Richardson said. “Kudos to him, but I would have put us up two possessions and padding the stats.”

The Browns offense had been introduced, both teams stood on the sideline and the national anthem started.

Then sheets of rain and hail arrived in a severe storm that included lightning.

The teams returned to the locker rooms, fans were ushered to the concourses and the opening kickoff was delayed 35 minutes.

“The national anthem was crazy,” left guard Joel Bitonio said. “The wind was blowing. I thought we were in that little hurricane, maybe like a Cat 1 or something like that. It was pretty impressive.”

Bitonio, in his seventh season, said he’d never been forced back into the locker room. Either had eighth-year defensive tackle Sheldon Richardson.

“It was weird. I thought he was singing his tail off, honestly,” he said of the anthem singer.

“I felt like we picked the longest national anthem ever,” Bitonio said. “It might have just been the weather, but that thing was taking a little while out there.”

The precipitation eventually stopped, but not the wind, which gusted to 60 mph. The weather was ugly in the previous game, a 16-6 loss to the Raiders on Nov. 1 at FirstEnergy Stadium, with wind and all types of precipitation. Stefanski said the wind Sunday was the worst he’d witnessed during a game.

“It was way worse than the Raiders game to be quite honest with you, just the random gusts of winds,” Mayfield said.

Interim Texans coach Romeo Crennel, who coached the Browns from 2005-08, will be second-guessed for a few choices.

He went for it on fourth-and-goal from the 2-yard line in the second quarter, and quarterback Deshaun Watson was stopped on a draw. Crennel called for a pooch punt in the second quarter rather than try a 48-yard field goal into the Dawg Pound end. Then going the other direction in the third quarter, he was slow deciding what to do on fourth-and-2 from the Cleveland 27-yard and used a timeout before going with a 46-yard field goal that Ka’imi Fairbairn missed wide left.

Crennel spent a second timeout in the fourth quarter when the Browns kept the offense on the field on fourth-and-4 from the 50. The Browns wound up punting.

“I was thinking about going for it and needed more time so I called timeout,” Crennel said. “The second timeout that I called, they were huddling on the ball and we were thinking that it was not going to be an offensive play so we had guys running on and off the field and so we were jumbled a little bit.”

DON’T FORGET ABOUT THESE

The run game will rightfully get most of the attention, but a pair of pass plays late in the third quarter proved to be pivotal.

Before Chubb could score his touchdown, receiver Rashard Higgins made a juggling 21-yard catch on the sideline on third-and-18, then drew a 14-yard pass interference penalty on third-and-8 from the Houston 49-yard line. Chubb took over from there.

“I stepped up in the pocket and the defender in the flat did not get deep enough so I was able to deliver the ball and he made a great catch on the sidelines and dragged his toes,” Mayfield said of the Higgins catch.

THE ONE THAT GOT AWAY

The Browns had to settle for a field goal on their first possession after having third-and-1 on the 7-yard line. Mayfield was under center, but the snap got past him. He picked it up and hurriedly threw it away to avoid a sack but was penalized for intentional grounding despite receiver Jarvis Landry sprinting to get close to the throw.

Kareem Hunt rushed for a season-high 104 yards as the Browns totaled 200 rushing yards for the third time this season, the most since they did it four times in 1978.

The Browns gave linebacker Jacob Phillips more time to recover from the knee injury that’s cost him most of his rookie season. He was inactive and missed his fourth straight game.

Phillips was listed as questionable on the official injury report Friday. He returned to practice Monday and was limited all week.

He injured the knee in the opener, returned in Week 4 and aggravated it in Week 5.

The Browns suffered no injuries of note, Stefanski said.

** The Browns elevated guard Michael Dunn from the practice squad for the game. He provided interior depth after versatile backup Chris Hubbard was placed on the COVID-19 reserve list Friday.

** Linebacker Malcolm Smith was chosen as the game captain by Stefanski.