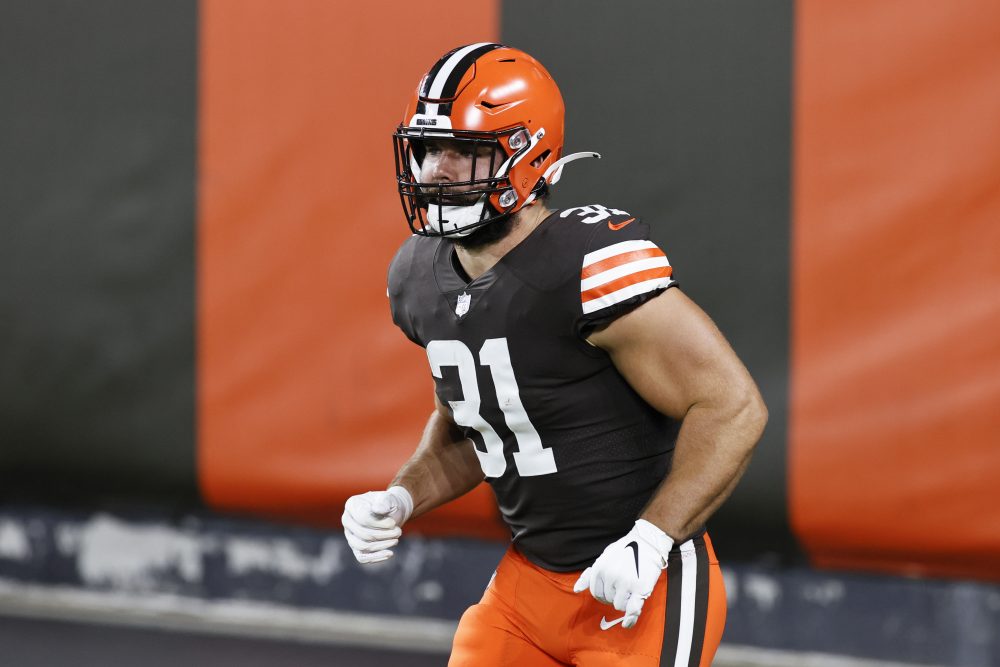 The coronavirus continues to creep into the Browns’ world.

Fullback Andy Janovich was placed on the COVID-19 reserve list Monday, marking the third straight week a member of the organization tested positive for the virus.

The Browns closed their facility in Berea and were waiting Monday night for results of contact tracing to see if any players were identified as high-risk contacts. If there were, they would be placed on the reserve list for at least five days. They’d be eligible to be activated if they continued to test negative.

“It is a concern for us and everybody else in the world,” cornerback Denzel Ward said. “That is the world we live in right now.

“As a team, we are just trying to do as best as we can so if someone does get it to limit the amount of people that get it. Just trying to stay safe and continue to wear masks. If someone is down, then it’s next man up.”

Janovich played 15 of 65 offensive snaps Sunday in the 10-7 win over the Texans at FirstEnergy Stadium. The test he took before the game came back positive Monday morning.

Dr. Allen Sills, the NFL’s chief medical officer, told Sports Illustrated last week the league has seen “zero evidence” of player-to-player transmission on the field during games or practices. He said that holds true throughout the sports world.

“To date, no one has documented a case of player-to-player transmission in a field sporting environment,” he said. “Obviously, I don’t think we’re at the point where we’d say it cannot occur, but none of us have seen it yet, and that’s certainly encouraging.”

Reserve offensive lineman Chris Hubbard tested positive Friday and was placed on the reserve list, where he remains. Hubbard was the first Browns player to test positive since the season started, and the contact tracing revealed no high-risk close contacts.

Ward missed practice Friday because it took longer for him to clear the contact tracing because his locker is near Hubbard’s.

“I was close enough so I was not surprised by that,” Ward said.

A staff member tested positive Nov. 7 during the bye — the team’s first positive of the season — and quarterback Baker Mayfield was identified as a close contact, went on the reserve list, continued to test negative and missed a practice.

“It’s the world we live in right now and we’re ready to do whatever is necessary to keep everybody safe, first and foremost,” coach Kevin Stefanski said. “Keep our coaches, players, staff safe and that’s really where our mentality is.

“While doing that we still have to prepare and get ready to play.”

Janovich was acquired from the Broncos in an offseason trade and has played all nine games this season. He has two catches for 13 yards and two rushes for 4 yards and has been an important piece of the running game that ranks fifth in the league with 159 yards a game. Johnny Stanton will likely be activated off the practice squad while Janovich is on the reserve list.

Defensive tackle Larry Ogunjobi said the Browns recognize the seriousness of the disease but have gotten used to the accompanying uncertainties, making adjustments and working through the strict protocols.

“It’s kind of what 2020 is,” he said. “It sucks but it’s just the nature of what we’re in right now. We’ve just been handling it since the start of training camp, as far as wearing our masks, following the right procedures and everything. We’re not really fazed by it, we’ve just got to continue to go through the protocols.”

Ogunjobi didn’t want his “not really fazed” comment to be misconstrued.

The shared responsibility includes players, coaches and staff refraining from doing anything outside of team headquarters that would needlessly expose them to the virus. For Ogunjobi and Ward, that means spending nearly all of their free time at home.

“I used to go out to dinner, hang out maybe with some teammates or hang out with some friends,” Ward said. “That is just not how it is right now with COVID. If we want a season and want to continue to keep a season, those are some of the things that you can’t do anymore. Just have to stay safe and stay out of the way.”

The players must also be flexible. All meetings have been changed to remote, and the practice schedule was adjusted.

Ogunjobi credited Stefanski for leading the team through the tumult.

“I feel like he’s been great,” Ogunjobi said. “Just his attention to detail, how serious he takes it as far as making sure guys are wearing their masks, making sure we’re following the rules and procedures as far as wearing our Kinexon (contact tracing devices), things of that nature.”