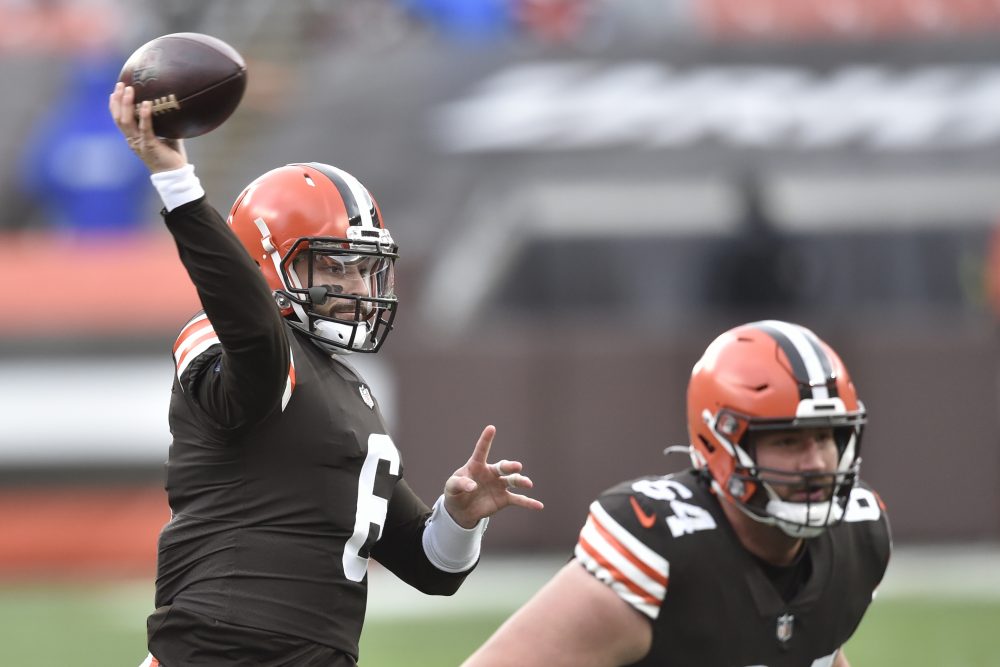 Baker Mayfield’s statistical line vs. the Texans should come with a giant asterisk.

He completed 12 of 20 passes for 132 yards and a 79.6 passer rating Sunday in the 10-7 win. The numbers are pedestrian at best, but came on a day when the wind was forceful throughout, gusted to at least 60 mph and knocked down trees and power lines across Northeast Ohio.

“There were moments there where it was just whipping, and there was no way you could complete a ball,” coach and play caller Kevin Stefanski said Monday. “There were times in warm-ups that you could not throw it 10 yards. It was getting knocked down.”

Stefanski couldn’t abandon the pass completely, not with the Texans geared to stop the run and facing the occasional third-and-long. But before he’d dial up a throw Stefanski talked to his staff about whether the wind had died down enough to try.

“There were times where it was third-and-longer and then we tried to make a play, but I think both teams understood that game was not for the forward pass at times,” he said. “Then a couple of times, we just tried to get Baker on the perimeter and maybe get him an easy completion or run it with him out there. That was what the game called for.”

This season is important to Mayfield’s future with the organization because the Browns have contract decisions to make in the offseason, but the blustery weather made the last two games difficult to evaluate. He went 12-for-25 for 122 yards vs. the Raiders, including at least five dropped passes, and said the wind was much worse against the Texans.

Stefanski said the conditions didn’t stop the evaluation of Mayfield.

“You evaluate the quarterback on every play,” he said. “Getting in and out of the right plays. Obviously as you are handing off, you are grading him. Of course, there were less opportunities to throw it, but in those opportunities you definitely grade him just the same.”

Mayfield’s best throw was a 21-yard completion to receiver Rashard Higgins on third-and-18 that extended the touchdown drive. Mayfield was able to fit the ball between defensive backs along the sideline.

His worst stretch of throws came at the end of the first half and cost the Browns the chance for points.

He threw behind rookie receiver Donovan Peoples-Jones on a slant but was bailed out by a good catch. He threw low and behind running back Kareem Hunt on a third-and-4 incompletion from the Houston 37-yard line, then overthrew receiver Jarvis Landry deep after scrambling to the right on fourth down.

“Yes, it was a function of the wind, but I could promise you Baker would want those throws back and complete them,” Stefanski said. “He is hard on himself. We are hard on him. I am also realistic in understanding the conditions.”

The scene was something. Both teams stood at attention for the national anthem, as rain and hail came down and the whipping wind blew the precipitation everywhere. When the song was over, the teams were ordered back in the locker rooms and the fans ushered to the concourses because of lightning in the area. The opening kickoff was delayed 35 minutes.

“It was crazy,” Stefanski said. “Getting pelted by sideways hail is what I will remember.”

Cornerback Denzel Ward was disappointed with the delay.

He wasn’t kidding about playing in the worst of the weather.

“That is what football is all about,” the Northeast Ohio native said.

The Browns were called for two 15-yard penalties — Landry for taunting after a catch and linebacker Mack Wilson for slamming receiver Randall Cobb into the ground. Strong safety Ronnie Harrison was in on the tackle, but Wilson was singled out.

Landry’s penalty — he spiked the ball at the feet of safety and former Browns teammate Eric Murray — helped short-circuit a drive in the second quarter, and Wilson’s unnecessary roughness penalty was followed the next play by the Texans’ touchdown, a 16-yard pass.

“We have to be better there,” Stefanski said. “We harp a lot on presnap penalties and then really those personal foul penalties — the 15-yarders that happen a lot of times after the play — we can’t have them.

“Both of those guys know that. It is undisciplined that I do not expect from those two players in particular. I know they would love to take those plays back. With Mack’s, there is a physicality that I want these guys to play with, but you have to play within the rules.”

Right guard Wyatt Teller returned to the lineup after missing three games with a calf strain and helped pave the way for 231 rushing yards. Pro Football Focus, which has Teller as the highest-graded lineman in the league this year at 96.8, gave him a 96.4 Sunday, best on the Browns.

“He did a nice job. It was not perfect, as you can imagine coming back to your first game,” Stefanski said. “A couple things I think kept him off-balance, but you did see the physicality and he was straining. He gave up a sack there, which again is just technique and continue to work, so I think he just was knocking some rust off.”

Defensive tackle Corey Liuget beat him for a sack in the third quarter.

The coaches continue to search for the best tandem at safety, so they used Sheldrick Redwine at free safety for part of the game in place of Andrew Sendejo.

Sendejo, who struggled in the first eight games, played 45 of 57 defensive snaps, Redwine played 17 and the Browns used three safeties on five snaps. Harrison played all 57.

Karl Joseph, who opened the year as the starting strong safety, was the odd man out. He played eight special teams snaps but none on defense.

“We are working through different combinations and getting guys snaps,” Stefanski said of the switch at free safety.

Stefanski called his last two first-half timeouts with 11 and six seconds remaining, even though the Texans had the ball and wouldn’t have to punt.

“They were still running the ball so I looked at it as an opportunity to strip the ball, and if you recover it, you are kicking a field goal,” he said.

** The Browns used the pistol formation twice, and Stefanski said it could be used more in the future. The pistol is a shallower shotgun that allows the running back to line up behind the quarterback.