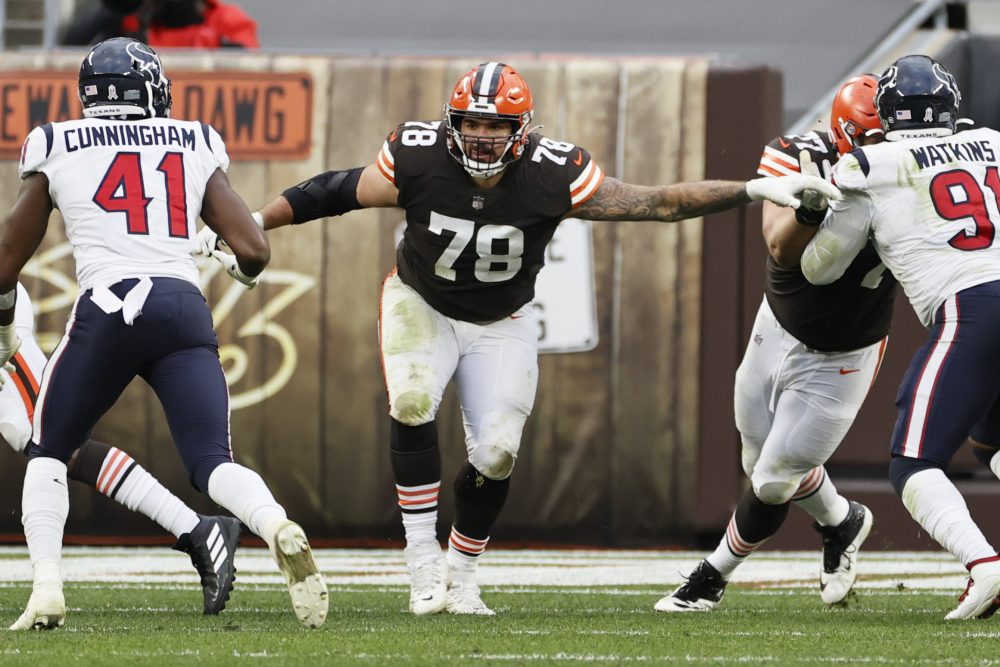 BEREA — The Browns were missing some important pieces Wednesday when they returned to practice.

The team isn’t allowed to say why a player is placed on the list, but a league source told The Chronicle-Telegram that Conklin, Parkey and Hughlett were identified as high-risk close contacts to a non-staff member who tested positive. The person is a medical practitioner not employed by the Browns.

If the players continue to test negative, they could be activated in time to play Sunday against the Philadelphia Eagles at FirstEnergy Stadium.

Defensive end Myles Garrett stayed home sick but didn’t go on the list and could be back Friday if he continues to test negative.

As unsettling as the increase in COVID-19 exposure and the lineup uncertainty are, the Browns have gotten used to going with the flow.

“This year is so crazy,” running back Nick Chubb said. “You don’t know what is going to happen. You have to be prepared either way.

“We have a next-man-up mentality here, so whoever is there is going to be great for us, no matter who it is. If we can get (the guys) back, that would be even greater.”

The team facility remained open and practice was held in the afternoon. The Browns have been in the NFL’s intensive protocols since a staff member tested positive Nov. 7, the organization’s first COVID case of the season. With cases spiking across the country and in the league, the NFL informed teams Wednesday they’d all be required to use the intensive protocols for the rest of the season.

That means only virtual meetings, limited numbers in the weight room and players must wear masks or face shields during practice, among other restrictions. The goal is to limit the spread of the virus and potential close contacts.

“We’re following all the protocols,” coach Kevin Stefanski said. “We’re in constant communication with the league on these type of things. Safety is of the utmost importance, and we’re doing everything to maintain that safety.”

Hubbard tested positive Friday and Janovich on Monday. No high-risk close contacts were identified for either.

NFL-NFL Players Association protocols say a player who tests positive but is asymptomatic can return 10 days after the positive specimen was collected, or after two straight negative tests separated by 24 hours and approval by the team physician after consultation with Infection Control for Sports. A player must pass a cardiac screen in both instances.

For a symptomatic player who tests positive, at least 10 days must pass and other requirements met. That leaves uncertainty as to when Hubbard and Janovich might be able to return.

“This team has been through a lot this year,” Chubb said. “We are very resilient. We will be ready for whatever comes at us.”

With Conklin and Hubbard on the reserve list, Kendall Lamm took over at right tackle. He’s started 26 games in his six-year career, including two with the Browns last year.

“Kendall works extremely hard,” Stefanski said. “He’s a very conscientious person, player, studies real hard. So should he be the guy, he’ll be ready to go.”

The Eagles have a strong pass rush, tied for third in the league with 31 sacks. Left defensive end Brandon Graham leads the way with seven and has two forced fumbles.

“He is a very experienced player. I just think he is extremely smart,” quarterback Baker Mayfield said. “His physical talent, he can kind of do it all. He is very quick. He recognizes plays and schemes quickly. I think when you mix that with physical talent, that is a pretty great combo.”

Mayfield remembers vividly defensive tackle Fletcher Cox from a preseason game as a rookie in 2018.

“He kind of gave me my ‘welcome to the NFL moment’ and tossed me like a ragdoll,” Mayfield said. “Familiar with Fletcher.”

Mayfield has struggled against pressure this season, especially in a 38-7 loss against the Steelers last month. The offensive line is a strength of the Browns and will need to be on top of its game no matter who’s at right tackle.

“They are so aggressive,” Stefanski said of the Eagles defense under coordinator Jim Schwartz. “They pin their ears back, and they are flying off the ball, defeating one-on-one blocks. Just across the board obviously with Fletcher Cox and Brandon Graham, but it is really all. They come in waves. They do a great job of getting off the ball and are extremely aggressive in the rush.”

Mayfield missed a practice last week after being a close contact of the staff member who tested positive, so he can relate to what Conklin, Garrett and others went through Wednesday.

“When you are sitting there at home, you want to be at practice and you want to be with everybody, Mayfield said. “But to me, it kind of makes you lock in a lot more mentally because you know you are not getting the physical reps.”

Punter Jamie Gillan was without his special teams buddies Parkey and Hughlett in practice, but the Browns have kicker Matthew McCrane on the practice squad and protected him again this week so another team can’t poach him before Sunday.

They don’t have an extra long snapper, but Stefanski said they have options on the roster, including linebacker Mack Wilson, if Hughlett isn’t cleared to play.

As for the fullback role without Janovich, Stefanski will weigh the choices, including adding Johnny Stanton from the practice squad to make his NFL debut.