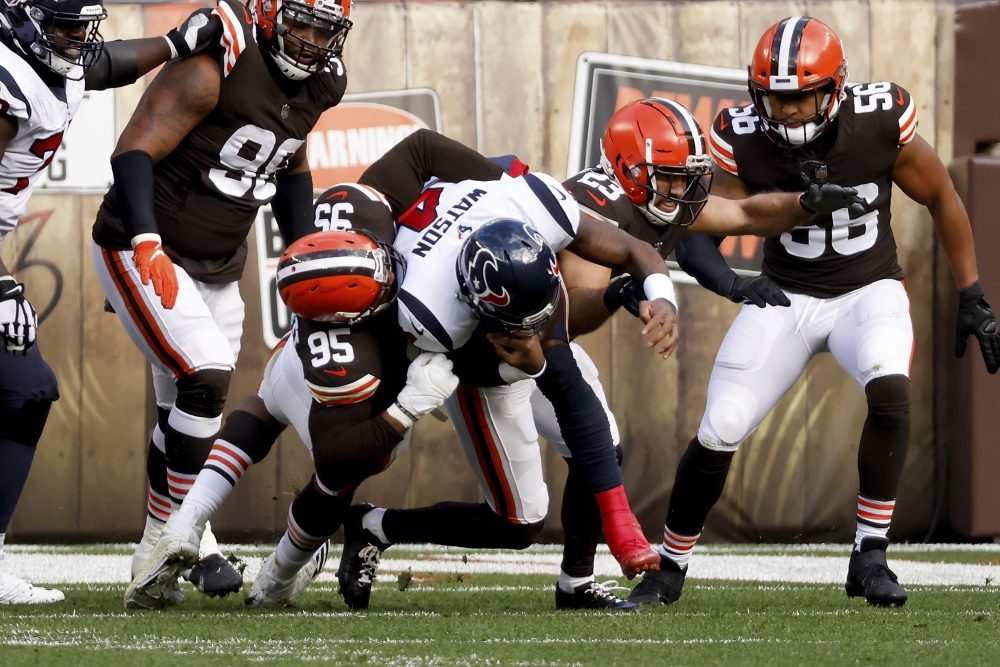 BEREA — Defensive end Myles Garrett stayed home sick Wednesday but could return to practice Friday if he continues to test negative for COVID-19.

The NFL changed its protocols during the season so anyone reporting symptoms consistent with COVID is required to be removed from the team and test negative twice, 24 hours apart, before returning. So Garrett will also miss practice Thursday.

“If guys are sick, it’s not like the old days where you say, ‘All right, come on in later in the day,’” coach Kevin Stefanski said. “You can’t do that.

“As you can imagine, you have to be careful anytime somebody is dealing with an illness, so he will not be out there.”

Receiver Odell Beckham Jr. went through the same procedure before being cleared to face the Steelers last month.

“I’ll send Myles some soup and maybe some poems he can read up on,” quarterback Baker Mayfield said, referring to Garrett’s love of poetry.

Garrett leads the league with 9.5 sacks and is tied for the lead with four forced fumbles. He’s a contender to be the league’s Defensive Player of the Year, one of the goals he set when he was the No. 1 pick in the 2017 draft.

“I would say that he has to definitely be in the conversation with some of the top defensive guys out there,” Eagles coach Doug Pederson said on a conference call. “He is surely making a case for that right now.”

Garrett hasn’t missed a game this season but didn’t practice Wednesday and Thursday before the Raiders game Nov. 1 because of an ankle injury. He took a hit to the knee early in that game and was limited but rested over the bye and was a full participant last week before the 10-7 win over the Texans.

“Just a tremendous athlete,” Pederson said. “Quick off the ball. He is long. He is powerful. He does a great job of swiping at the quarterback’s arm. He knows how to bend. This guy, he is one of those freak athletes that just high motor and relentless effort.

“That is why he is leading the league in sacks, quarterback hits, knockdowns and things like that because he is relentless that way. You see him split double teams. You see him beat tackles. Teams chip him and use tight ends and all kinds of stuff to try to slow him down, but he always finds a way to be around the quarterback or make a tackle in the backfield. He is another one of those players that you enjoy watching until you have to play against him, and then it becomes a little more of a problem for us.”

Mayfield isn’t complaining about the high winds that limited the passing attack the last two games, when he went a combined 24-for-45 for 254 yards and a 70.0 passer rating.

“Those are the two windiest games I have ever been a part of,” he said. “You really have to try and get a tight spiral because if you have any sort of wobble on it, the wind will affect it extremely. Just learning that on some of these throws, you really had to put some mustard behind them and try and judge the wind as best as possible.”

He miscalculated on a deep overthrow for receiver Jarvis Landry at the end of the first half Sunday vs. the Texans.

“It just kind of carried on me,” Mayfield said. “I tried to put touch on it, but it just got caught in that jet stream and went right over his head. There are some things that you can prepare for, but trying to play in the wind is another ballgame.”

He said he enjoyed watching how everyone handled the adverse conditions and kept to his normal plan of taking care of the ball. He didn’t throw an interception in either game.

“The teams that make the least amount of mistakes in those types of games and control the ball and just kind of stay as efficient as possible,” he said. “It is whatever it takes to win. The stats I could care less about, but the one stat that I care about is wins and losses.”

For the second straight week the Browns face a quarterback they could’ve drafted but chose to trade the pick, despite needing a quarterback. The Browns traded the No. 2 pick in 2016 and a fourth-rounder to the Eagles for five picks, including first-rounders in 2016 and ’17 and a second-rounder in 2018. The Eagles took Wentz.

“Heck, yeah, I’d do it all over again,” Pederson said. “He’s the guy we wanted back then, he’s still the guy we want today. And I love everything about Carson Wentz, and he’s a great leader for our team and our city.”

He played like an MVP in 2017 before his anterior cruciate ligament tore. Nick Foles led the Eagles to the Super Bowl, where they beat the Patriots.

Wentz has been inconsistent this season, as the Eagles are 3-5-1, although they’re in first place in the putrid NFC East. Wentz ranks last in the NFL with 12 interceptions, 32nd with a 58.2 completion percentage, 31st with a 73.1 rating, 21st with 2,091 passing yards and tied for 21st with 12 touchdowns. He’s been sacked a league-high 35 times.

“He’s such an aggressive style of player that sometimes it can get him in trouble from time to time,” Pederson said. “But he learns to manage it and he handles it, and we’ve had some injury up front with the offensive line.”

Andrew Berry spent last season in Philadelphia’s front office before returning to the Browns as general manager. He made a lasting impression.

“Really got to know him. Obviously a great person and a great family,” Pederson said. “Just a smart guy. He understands the needs of teams. He understood what we needed. He worked well with (GM) Howie (Roseman).

“He knows ball. He is going to do a great job there in Cleveland for them.”

Center JC Tretter was excused from practice for a non-injury reason.

** Joining Tretter and Garrett as absent were the four players on the COVID-19 reserve list: right tackle Jack Conklin, offensive lineman Chris Hubbard, fullback Andy Janovich and kicker Cody Parkey. Long snapper Charley Hughlett was also absent, as he was expected to be placed on the list.

** Rookie linebacker Jacob Phillips (knee) was a full participant for the first time since aggravating the injury Oct. 11 against the Colts.

Pederson played quarterback for the Browns in 2000, going 1-7 as a starter after Tim Couch was hurt. The Browns went 3-13.

“I loved living there,” Pederson said. “I just remember the rich tradition and the history of the city. A great sports town.

“I know there are not a ton of fans in the stands, but it has to be a great place now that they are winning.”

** Mayfield, a proud University of Oklahoma alumnus, couldn’t hold his tongue when asked about the Sooners’ matchup with Oklahoma State on Saturday.

“What are you trying to stir up right now?” he said. “The little brother always needs to be put in his place, you know that.”