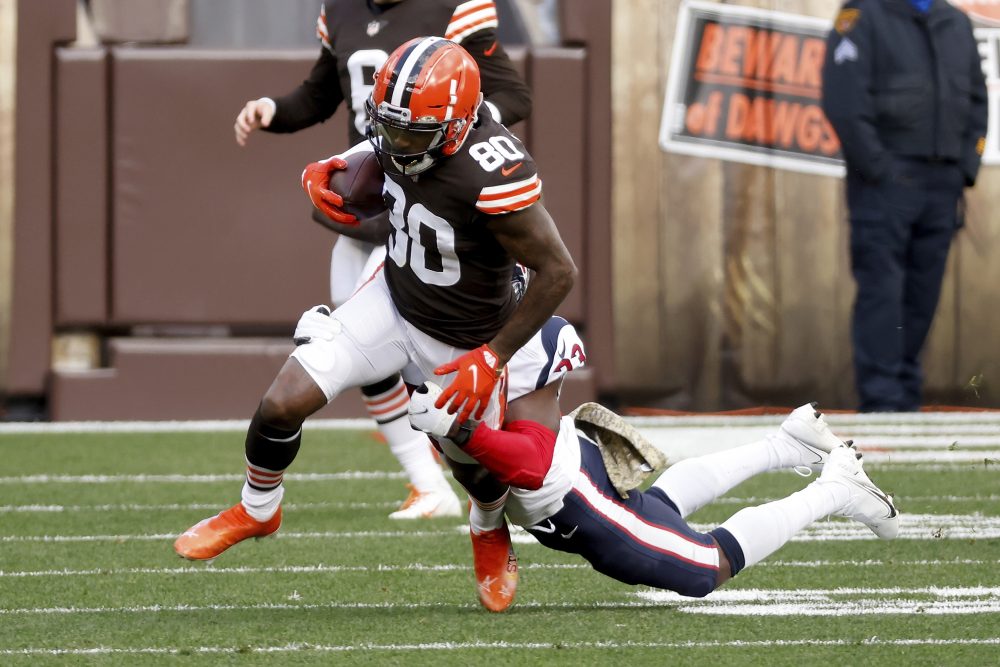 BEREA — Jarvis Landry didn’t know he had reached 600 career catches with a 2-yard grab Sunday in the win over the Texans.

The moment passed without acknowledgement, but not the milestone.

“There are a lot of guys who have played this game,” Landry, a five-time Pro Bowl receiver, said Thursday. “Just to be recognized that way and accomplish what I have accomplished is definitely something that I will look back at the end of the season and maybe have a drink.”

“It definitely means a lot to be in that category surrounded by those names that I am surrounded by,” Landry said. “I am looking forward to continuing to make plays for this team and for my individual goals, as well.”

Even after Landry found out he hit the big 6-0-0, he was confused about when it happened and upset he didn’t keep the souvenir. Landry thought it came in the second quarter, followed by a taunting penalty for spiking the ball at the feet of safety and former Browns teammate Eric Murray.

“I guess that 600th came with a taunting penalty so I will always remember that being the catch instead of having a ball to show for it,” Landry said.

Does he want the taunting penalty back?

“Yeah, the penalty and the ball,” he said.

He was informed later in the Zoom interview that No. 600 was the 2-yarder in the third quarter, the last of his three receptions for 29 yards in game where gusting winds made throwing a risky adventure.

Landry’s resume gets more impressive by the game. He has been to five straight Pro Bowls, has played in 105 straight games to open his career and set NFL records with 400 catches in his first four seasons, 481 in his first five and 528 in his first six.

“They all are very special to me. I love catching the ball. I love playing this game. The Pro Bowl outside of a Super Bowl is the next-best thing that a player can get. It definitely all coexists.”

“It is special for him to get that 600th reception. That was big. There is a guy who comes into work every day with the lunch bucket and the hard hat. He just goes to work and does his job.”

Landry’s foundation partnered with the Greater Cleveland Food Bank on Tuesday for a Thanksgiving food drive that distributed approximately 300 meals to area families in need. He didn’t attend because of the team’s strict protocols during the pandemic and thanked the volunteers.

Left guard Joel Bitonio entered the league with Landry in the second round in 2014, Bitonio at No. 35 to the Browns and Landry No. 63 to the Dolphins. They’ve been teammates for three years since the Browns traded for Landry.

“He is not the most vocal guy at practice of all time, but he is always there, he is always willing to work and you know when it comes to Sunday he has his game face on,” Bitonio said. “It is like anything you need him to do, he is going to step into that role. That is really all you can ask.”

The dedication to, and success of, the run game coupled with nasty weather the last two games have robbed the receivers of their normal number of chances. Landry leads the team with 36 catches for 448 yards but is looking for his first touchdown.

He can’t wait to get in the end zone.

“That is just the way the ball has bounced for him this year, but he will get in there soon,” Van Pelt said.

With Nick Chubb and Wyatt Teller back, Browns plan to return to league’s No. 1 run team
Nick Chubb-Kareem Hunt tandem driven by fresh legs and unselfishness, has great shot at another special milestone