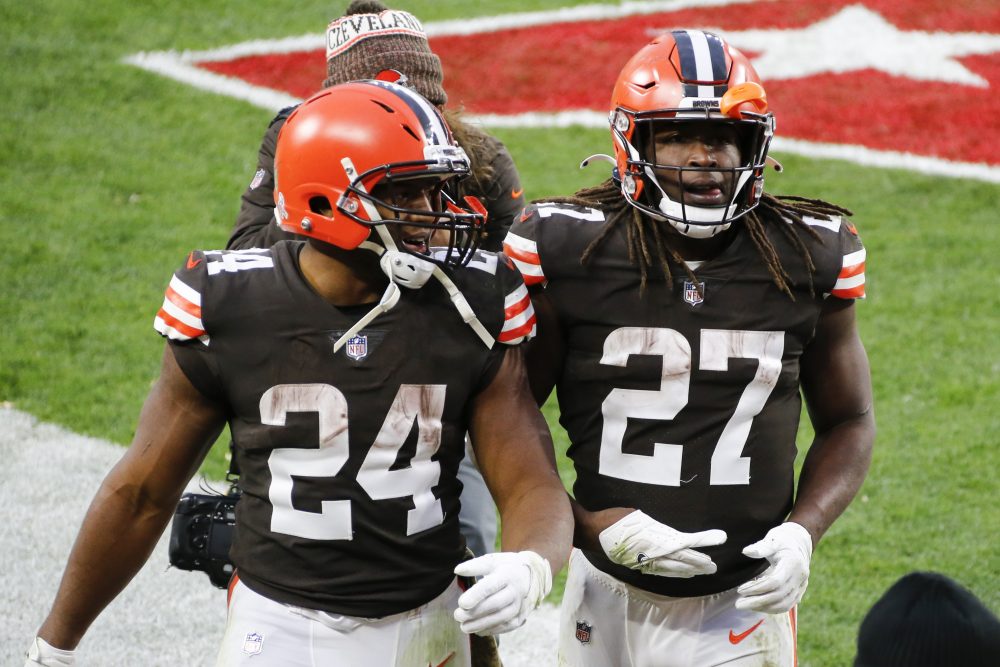 BEREA — Kevin Mack and Earnest Byner never did it. Neither did Mike Pruitt and Greg Pruitt before them.

Nick Chubb and Kareem Hunt had already shown they were a special backfield tandem but cemented their place in Browns history Sunday in the 10-7 win over the Texans. They became the first pair of Browns to each rush for 100 yards in a game since Leroy Kelly and Ernie Green against the Steelers in 1966.

“It felt great just to be able to go out there and ball out with my boy,” Chubb said Wednesday. “That is definitely huge for us and for this team and organization. Hopefully we get plenty more of them.”

The Browns have an incredible tradition of running backs that ranks at or near the top in NFL history.

Marion Motley, Jim Brown and Kelly are Hall of Famers, with Brown arguably the best to ever play the position. Mack and Byner each eclipsed 1,000 yards rushing in 1985, one of five running backs duos in NFL history to accomplish the feat.

Chubb and Hunt have been together for less than two seasons — and only shared the field 13 times — but their talent is undeniable. Hunt won the NFL rushing title as a rookie in 2017 with the Chiefs, and Chubb finished second last season.

“Those two guys are very deserving of all the credit they get,” coordinator Alex Van Pelt said Thursday. “They are both excellent runners. Kareem would be a Pro Bowl-style starter on most teams. We are lucky to have them both.

“To get them both over 100, that was special. In the weather conditions, we knew we wanted to run the ball and run it efficiently and effectively. Both of those guys provided that for us.”

Despite Chubb missing four games with a sprained medial collateral ligament and Hunt being slowed by groin, thigh and rib injuries, they have the chance to both hit 1,000 yards. Hunt has 633, a 4.7 average and three rushing touchdowns. Chubb has 461, 6.1 and five.

With seven games left, Chubb must average 77 yards a game and Hunt 53. The road continues Sunday at FirstEnergy Stadium against the Eagles, who have a big-name defensive line but rank 26th against the run (133 yards a game) and struggle against misdirection.

“We have not talked about it yet,” Chubb said of the dual 1,000-yard seasons. “I am sure Coach Stump (Mitchell, running backs coach) definitely wants us to get it. He is big on us being the best person we can be and he is also big on us breaking records. I definitely think we will hear about that soon enough.”

Chubb said it would “definitely” be cool is he and Hunt could join Mack and Byner in the select company. Their unselfishness gives them a great opportunity.

Some backs gripe about needing a ton of carries to get in a groove, but Chubb and Hunt are happy taking turns and sharing the load.

“All we want to do is win. That is all that matters.”

They have the same mindset but different styles.

“Nick has that powerful ability that is coupled with home run speed, which is very rare,” coach Kevin Stefanski said. “Kareem’s ability to break tackles and his elusiveness, whether in the open or really in a crowd, is quite impressive.”

Besides having a high-level talent available if the other gets injured, the biggest benefit of the combo is having a fresh set of legs ready at all times. Quarterback Baker Mayfield stressed this before Chubb returned from injured reserve to face the Texans, and it was evident again.

They rotated throughout the game, taking turns chipping away at the Texans defense. The final, game-sealing drove home the point.

Hunt opened the possession and carried for 3, 6, 2, 19, 3 and 4 yards. Chubb entered on third-and-3 and turned the corner for the 59-yarder that ended the suspense, stepping out at the 1-yard line to make sure the Texans didn’t get the ball for the chance to pull off a miracle.

“It is really hard because it keeps those guys fresh,” Eagles coach Doug Pederson said. “They do it for four quarters and they can sustain it. When you have one guy doing it, that guy tends to wear down towards the end of the game.”

Instead of Chubb or Hunt tiring, it’s the defense dragging.

“It is just easier to break tackles,” Chubb said. “In the first quarter, guys are flying around full speed, coming out of nowhere and tackling and wrapping up hard. Fourth quarter, it is like it is not there anymore. It is like you can see them kind of slowing down. You can just feel it.”

“Just the effort on defensive guys, you can tell the way they approached those guys, whether they are coming in with the same intensity or they are diving early and not wrapping up,” he said. “They wear on those guys, and our O-line, they feed off of that. They see those guys breaking tackles and they continue to push the pile.”

Chubb said he was rusty at the start Sunday, but he looked like a well-oiled machine on the final run. He got the pitch left and saw the Texans flowing his way. Safety Justin Reid had a clear shot behind the line, but Chubb fooled him with a hesitation move, turned the corner and blew past the second level of the defense.

“I was getting a little nervous when it got strung out that long,” Mayfield said. “Just being on the other side of the field when he cut it loose, that was something pretty cool to watch.”

“Nick made a great individual effort,” Stefanski said. “They had an unblocked player right there, and he did something that not many people on this earth can do.”

Chubb said he had “no idea” how he made Reid miss and didn’t remember until he watched the film.

“It just happened so fast,” he said. “I caught the toss, and somebody was on the ground right in front of me and I had to go around that and then it was a guy in my face. I am just happy I had enough room on the sideline not to step out, be able to turn up the field, go down there and go out of bounds and seal the game.”

Jarvis Landry honored to be in select company of players with 600 catches in their first seven seasons
After slow start, Nick Chubb, Kareem Hunt deliver knockout blow with pair of incredible runs